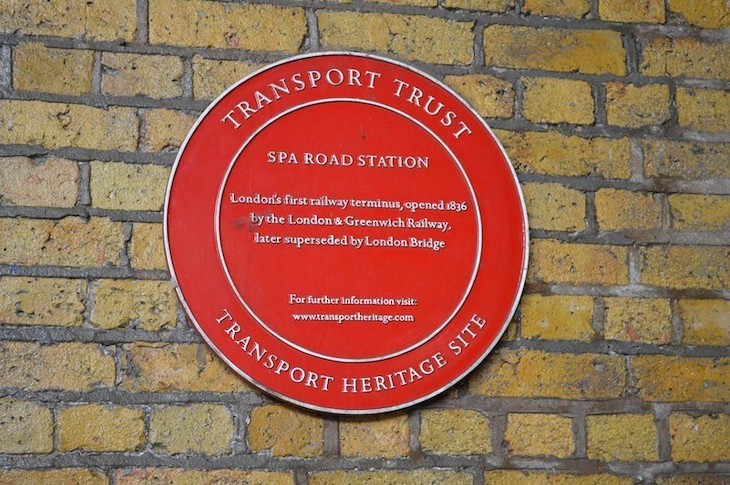 Blue plaques aren’t the only game in town. Look out for these distinctive red discs around London and the wider country.

Once you get an eye for these things, you soon notice that Historic England’s Blue Plaques are not the only type of commemoration on London’s buildings. Plaques come in many different shapes, sizes and colours (including lots of blue plaques that are not Blue Plaques!).

Many groups have their own schemes for remembering people, events or places that they deem noteworthy. Among the most striking, in our opinion, is the “Red Wheel Scheme” of the National Transport Trust, which records sites of important transport heritage.

The scheme covers the whole UK, and around 120 sites have so far gained a crimson disc. Sites are chosen in cahoots with local historical societies and can be nominated: “for architectural reasons; as an illustration of progress in social or economic history; as involving technological innovations; for their associations with particular individuals or events; or for their group value”.

Where to spot the Red Wheels

London has a handful of Transport Trust Red Wheels, though perhaps not as many as you might think. Just six can be found in the central area, with three more in the outer boroughs

Perhaps the most visible, and most viewed, is the one near the eastbound platforms of the Circle line at Baker Street, shown at the top of the article. The world’s first underground railway is exactly the kind of thing that deserves a transport heritage plaque.

Another really important one is London’s first railway terminus which, as any transport buff will tell you, was Spa Road in Bermondsey. As the plaque notes, Spa Road was as close to the centre as things got when the huge viaduct that still sweeps through towards Greenwich opened in 1836. London Bridge station superseded it 10 months later.

The Camden Town area is blessed with two rouge roundels. You may be able to guess the first, which is on the Roundhouse — that distinctive building that once housed a railway turntable and is now one of London’s best music and arts venues.

The second is a little more random, though still deserved. It’s pinned to the entrance of Camden Road Overground station to highlight “One of six Italianate stations designed by Edwin Henry Horne”, and is the only one still in use as a station. The others, since you’re now wondering, were at Highbury and Islington, Bow, Barnsbury, Canonbury and Hackney.

It’s down to Victoria for our fifth central plaque. This marks the 90-year-old coach station, and notes its distinctive art deco architecture. Unlike most plaques, you have to duck indoors (where you can’t actually see the art deco) to view this one.

The final central plaque celebrates a mode of transport that was once little-known and certainly not public. This is the MailRail line that once conveyed letters and parcels underground between Whitechapel and Paddington — a kind of miniature Crossrail. To see this one, you’ll need to buy a ticket to ride on the MailRail, which is now an excellent visitor attraction.

As noted above, Greater London contains three more Red Wheel plaques. Our favourite can be found at the Ace Cafe in Stonebridge, NW London. For decades, the Ace has been a centre of biker culture, and it’s wonderful to see this recognised with an official heritage plaque.

Elsewhere, Crystal Palace’s low level station gets the nod for its unique architecture and associations with the long-destroyed glass palace. The other is Cooper Car Works in Surbiton (just within the London boundary), which gave the world the Mini Cooper and championship-winning F1 cars.

And that’s it for now in London. You’re probably thinking something like, “Well fine, but what about Stockwell Bus Garage, or the Thames Tunnel, or the Kingsway tram tunnel? Don’t these wonders deserve plaques too?”

The answer is yes, they probably do, along with many other transport heritage sites. We’re very lucky in London to have so many surviving historical sites — more than could be plaqued-up without spending a fortune. Happily, the Transport Trust keeps a map and database of notable sites, some of which will hopefully see a red wheel at some point.

All images by the author.