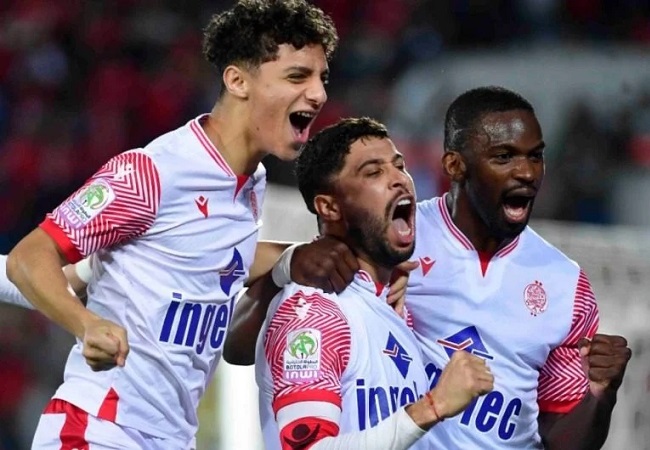 CAF Champions League semi-finals opened this afternoon with Wydad Casablanca securing a 3-1 comfortable win over Petro de Luanda in the first leg at the 11 November Stadium.

Wydad took a two-goal lead into the break and Guy Mbenza put the result beyond doubt with a third in the second half.

Job gave the Tricolores a glimmer of hope with a consolation goal late on, but Walid Regragui’s side are in control of their destiny after scoring three away goals.

The visitors started the game very well by creating the first chances. Aymen El Hassouni missed the target at the very first minute.

In the aftermath, the Angolans missed shot after shot against goalkeeper Tagnaouti.

Quarter of an hour into play and on a free kick from Attyat Allah, Tiago Azulao with a header, scored against his camp. A boon for the Moroccans.

After the goal, Petro players climbed higher. But they failed to set the record straight. Neither Yano nor Gleison managed to surprise Tagnaouti.

In first-half stoppage time, just after a miss from Jaredi, Yahya Jabrane doubled the advantage for Wydad following a powerful shot from outside the box.

After the break, the foals of Santos played their all in order to succeed in leveling the mark without however managing to find the target.

Yano missed, just like Quinito during the first five minutes of the second half.

Shortly after the hour mark, Guy Mpenza sealed the victory of the Moroccans by scoring the third goal for Wydad. The Congolese striker concluded a nice collective work (68 ‘).

Ten minutes from the end of the match, Ricardo Job reduced the gap for the Angolans, scoring the goal of hope one week before the return match scheduled for Casablanca.

It is worth noting the expulsion of Petro de Luanda player William Soares at the very end of the game.

Also Read : “WE HAVE NO EXCUSES” – SAID UNDER FIRE AHLY COACH AHEAD OF ES SETIF CLASH

The other semi-final game will see Al Ahly welcome ES Setif of Algeria in WE Al-Ahly Stadium in Cairo to kick off at 19:00 GMT.