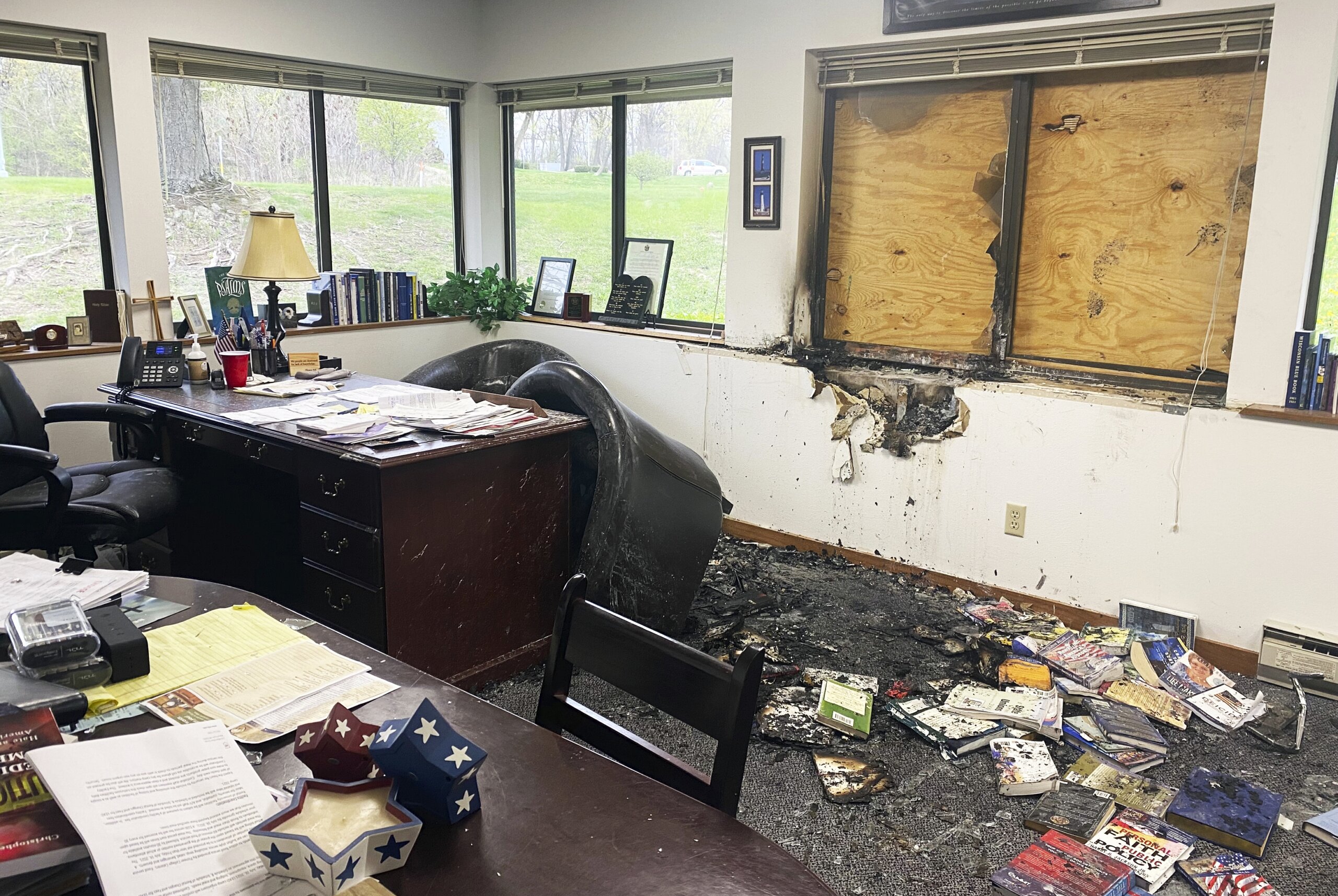 MADISON, Wis. (AP) — Police asked for the public’s help in tracking down those who vandalized and threw two Molotov…

MADISON, Wis. (AP) — Police asked for the public’s help in tracking down those who vandalized and threw two Molotov cocktails into the office of a prominent Wisconsin anti-abortion lobbying group’s office that was damaged by fire.

No one has been arrested and there are no suspects in custody in the fire that was discovered early Sunday morning when someone driving to Madison’s nearby airport noticed flames coming from the office building, Madison Police Chief Shon Barnes at a news conference Monday.

The fire at the Wisconsin Family Action office came after two Catholic churches in Colorado, including one known for its annual anti-abortion display, were vandalized last week. And police said two Molotov cocktails were thrown at an anti-abortion organization Sunday morning in a suburb of Salem, Oregon, after an unsuccessful attempt to break in.

The leak last week of a draft opinion suggesting that the U.S. Supreme Court was on course to overturn the landmark Roe v. Wade decision that legalized abortion nationwide sparked protests across the country, including in Madison. Demonstrations included weekend protests by abortion rights supporters outside the homes of conservative U.S. Supreme Court justices, with more planned this week.

One Molotov cocktail thrown into the Wisconsin Family Action office failed to ignite and the investigation is ongoing as to whether the second one did, the police chief said. The message “If abortions aren’t safe then you aren’t either” was spray-painted on the exterior of the building.

No one was hurt, but Barnes said had someone been in the office “it could have gone differently.”

Barnes said he was not aware of any threats to others, but he cautioned that the investigation could be lengthy.

“I do anticipate we will be able to solve this but we want to take our time to be sure we do it correctly,” he said.

Investigators from the FBI and the Bureau of Alcohol, Tobacco, Firearms and Explosives are assisting with the investigation. Barnes encouraged anyone who may have seen anything to contact police. Area businesses were also being contacted to see if they have any evidence or captured anything on surveillance cameras, he said.

Democratic Gov. Tony Evers, who is up for reelection in November, decried the attack Monday when asked about it at a groundbreaking event in a Madison suburb.

“It was a horrible, horrible incident,” Evers said, adding that whoever is responsible “should be arrested and put on trial. This is unacceptable.”

“Violence does not solve the issues we’re facing as a country,” Evers said.

The president of the lobbying group, Julaine Appling, said she believed the vandalism was a direct response to the leak of the court’s draft opinion. She said “this attack fails to frighten us, and instead steels the resolve of law-abiding, common-sense, every-day folks to stand up and push back.”

Wisconsin Family Action has been a prominent force in the state for years, advocating for laws to limit access to abortions, fighting to overturn Roe v. Wade and working on numerous other hot-button social issues.

Politicians from both parties swiftly condemned the vandalism.

Clinics that perform abortions have sometimes been targeted by vandals, too, including as recently as January when a Planned Parenthood clinic in Tennessee was hit by arson.