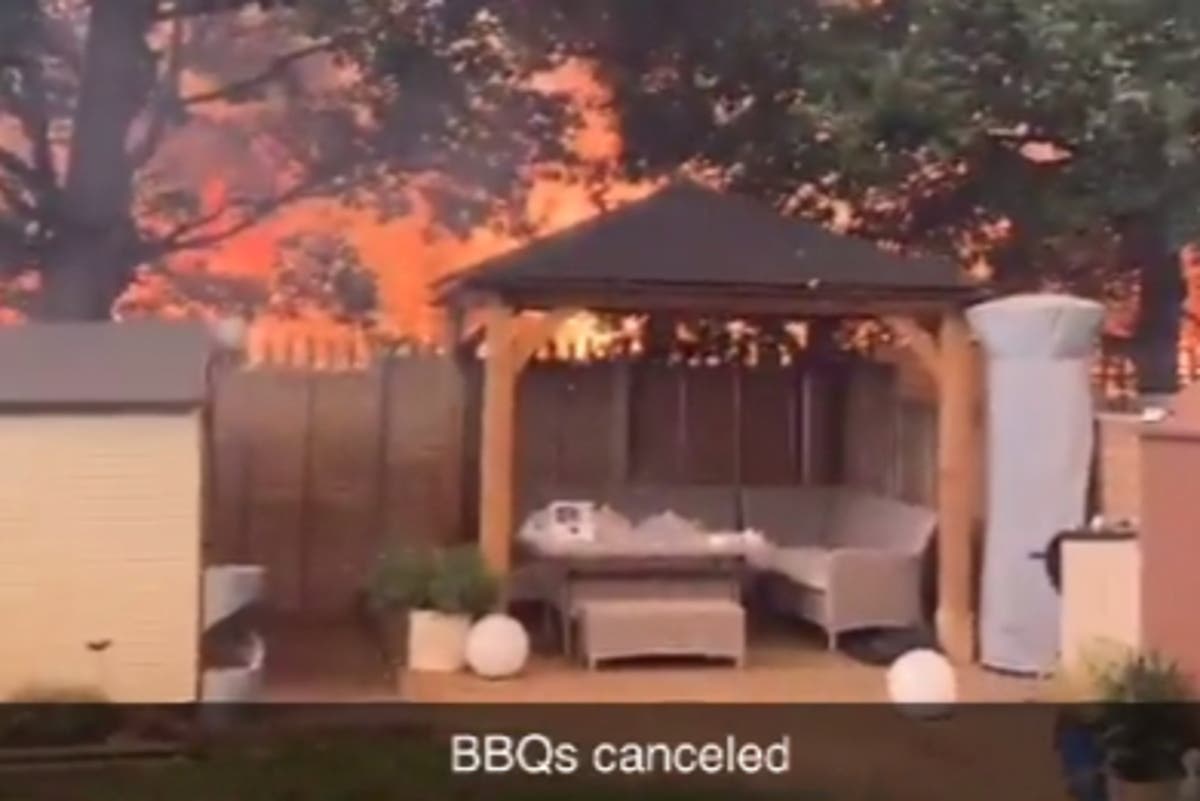 irefighters tackled two huge wildfires on both sides of the capital at the same time with a second 35C heatwave expected next week.

More than 70 people were evacuated from their homes as firefighters took on both wildfires raging across west and east London at 4.30pm.

Nearly 30 homes were saved after 70 firefighters worked in “hot, arduous conditions” to tame the flames that broke out in Hereford Road in Feltham.

People living miles away in both Uxbridge and Twickenham reported heavy ash falling from the sky.

At the same time, a grass fire broke out on the opposite side of the capital in Newbury Park eating up around 15 hectares of farmland.

At the source of the Feltham blaze, neighbours recorded dramatic footage of huge flames licking their garden fences before they fled their homes.

Some locals retreated to the Railway Club social club which opened its doors so people could shelter.

Rhys Collison posted a video of the back of his garden going up in flames under the caption “BBQ cancelled”.

He said: “It wasn’t what you wanted on a Sunday.”

Neighbour Avni Dudhia, 32, said: “For around 40 minutes at least it was just flames and a lot of thick dark smoke.

“It was definitely scary as you could see how quickly the fire was spreading across the trees to the right, so much smoke too.”

Station Commander Tamer Ozdemir, who is at the scene, said: “Firefighters have worked incredibly hard in hot, arduous conditions to stop the blaze spreading to nearby properties.

“Their hard work has saved approximately 30 homes in Hereford Road.

“Around 60 residents were evacuated due to the amount of smoke.”

A London Fire Brigade spokesman said the force had taken 44 calls to the blaze. They said the cause of the fire is not known at this stage.”

Hounslow council hailed firefighters for eventually getting the fire under control. In a statement, they said they were already cutting back vegetation and funding extra groundskeeper patrols to prevent further grassfires after Hanworth Park went up in flames on August 2.

Their advice to the public, they say, is clear:

The Newbury Park fire blackened large areas of farmland with horses being lead to safety by police officers.

There were no reports of any injuries.

A London Fire Brigade spokesperson said: “The warmer weather we have been having makes the ground extremely dry, which unfortunately means grassland, parks, undergrowth and woodlands will burn quickly when exposed to even the smallest of sparks.

“We don’t want people to be complacent and that means not barbecuing in parks and open spaces, ensuring cigarettes are properly disposed of and clearing away rubbish and glass as they can magnify the sun and cause a fire.”

It came after three other grassfires destroyed acres of land in Rainham, Upminster and Woolwich over Friday and Saturday.

There are fears that more wildfires could be sparked as Britain braces for another heatwave that will last longer than July’s record-breaking hot spell, with highs of up to 35C expected next week.

Temperatures over the coming days will remain lower than last month’s scorching 43.C but the dry weather will continue over a “prolonged period”, the Met Office has said.

The whole of England and Wales is likely to see sunshine and dry conditions over the coming week as high pressure builds across the UK.