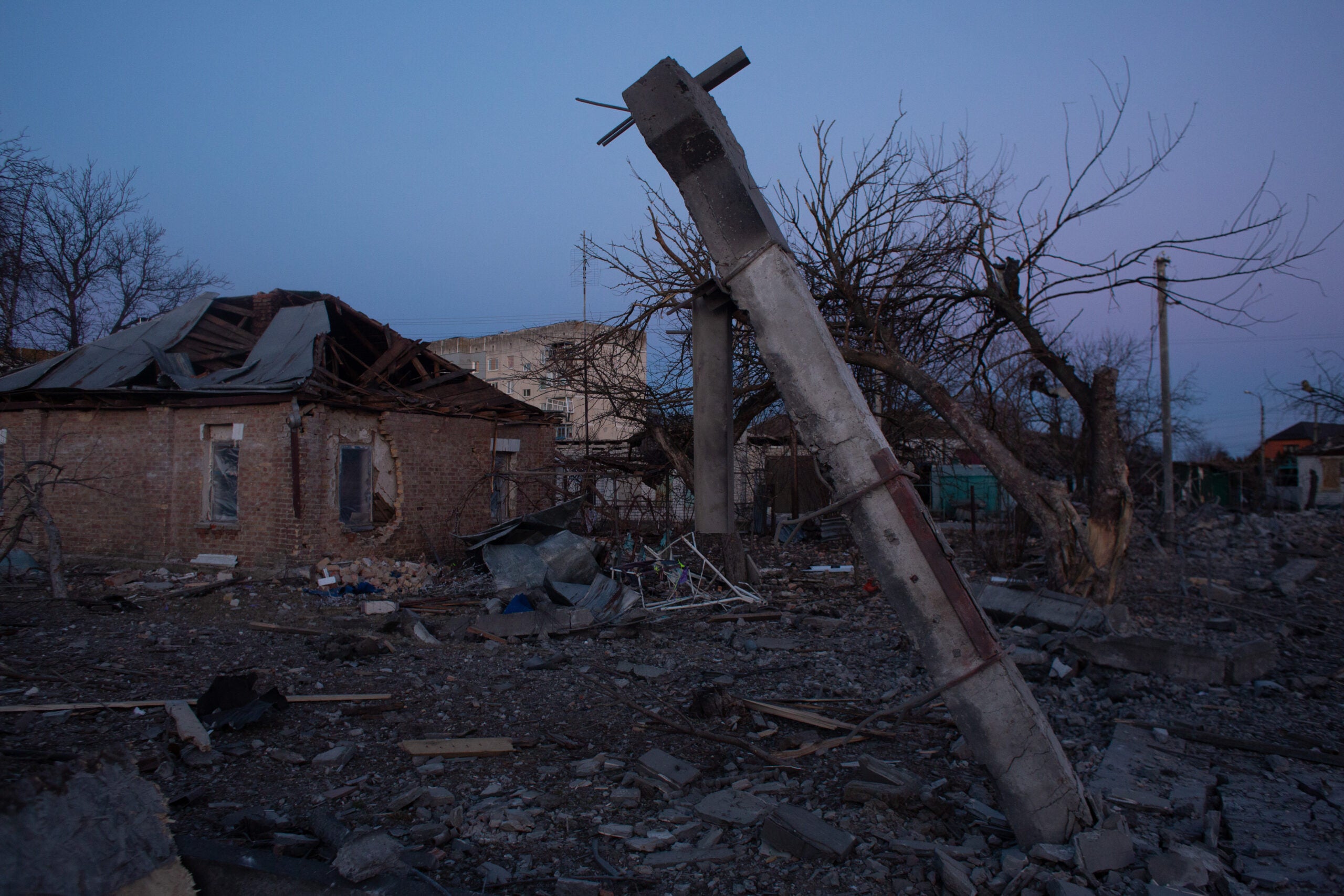 The war in Ukraine has led to a resurgence of fears about the use of nukes.

Russia is armed to the teeth with nuclear weapons, which some analysts fear it would consider using to escalate the conflict if it felt it was losing, and Ukraine’s Western backers are also armed with nukes, which means that the conflict — if it were to spiral beyond Ukraine — would pit nuclear powers against each other.

Only recently has Russia gone out of its way to tamp down the worries: Kremlin Spokesman Dmitry Peskov told PBS Monday that “no one is thinking about” using nuclear weapons. But even as peace talks stir optimism, trust in Russian rhetoric remains low, after Moscow’s repeated claims that it would not invade Ukraine.

Despite echoes of the Cold War past, the strategic landscape has shifted. Wartime equations about the risk of using nuclear actions — which are never simple — have been complicated by “tactical” warheads that Russia has stockpiled. These smaller nuclear weapons, far less powerful than the ones the United States dropped on the Japanese cities of Hiroshima and Nagasaki during World War II, are designed to be used on the battlefield.

Their smaller size, some experts fear, could break down the nuclear taboo. Russia is believed to have more than 1,500 of them.

Sarah Bidgood, director of the Eurasia program at James Martin Center for Nonproliferation Studies in Monterey, said it was hard to estimate the level of risk that Russia would use a tactical nuke in Ukraine, but that it was clear Russia relied on its nuclear weapons, including tactical weapons, to give it flexibility in managing the risk of escalation.

“That means Russia could introduce nuclear weapons into a conflict when it felt it had run out of conventional options and was facing an existential threat, Bidgood said. “It’s hard to say, because we don’t have a good sense for what all of Putin’s red lines are here, or what he regards as an existential threat.”

What is a tactical nuclear weapon?

“Strategic” warheads have enormous yields and would be able to level a city. Then, there’s the “nonstrategic,” or “tactical,” warhead. These are smaller, though still able to inflict considerable death and destruction.

Aside from their size and yield, the key difference is how they are intended to be used. A strategic weapon is designed to strike with devastating might as part of a grand strategy during wartime. This has been the traditional nuclear fear in Washington and Moscow — a Dr. Strangelove-esque nuclear doomsday scenario.

But tactical nuclear weapons are designed to be used on a battlefield. Some types have a variable yield, which would allow their explosive power to be calibrated to a specific attack; others, dubbed “neutron bombs,” were designed to spread radiation with only a minimal blast.

What do we know about Russia’s tactical nuclear arsenal?

Many countries, including the United States and Soviet Union, invested heavily in tactical weapons during the Cold War. Both Washington and Moscow unilaterally downsized their nuclear programs after the fall of the Soviet Union.

An arms control treaty, called New START, negotiated by President Barack Obama and Russia’s then-president Dmitry Medvedev in 2010 limited both countries to the deployment of 1,550 nuclear warheads on ballistic missiles and bombers. However, the smaller tactical weapons are not governed by this deal, nor any other international agreement.

A report released last month by the Federation of American Scientists found that Russia had a stockpile of approximately 4,477 nuclear warheads in total. Of this number, roughly 1,588 were strategic warheads that had been deployed, while 977 were in storage but ready to use. Russia had roughly 1,912 nonstrategic warheads which it says are also in central storage, though FAS notes that these storage sites may be close to bases with operational forces (a further 1,500 warheads were considered retired but still “largely intact”).

The United States, meanwhile, has 1,644 strategic nuclear weapons deployed, as well as 100 tactical weapons that are deployed in Europe. It has a further 1,984 warheads in storage — of which 130 are tactical.

Are tactical nuclear weapons of particular importance to Russia?

In the late 1990s, facing economic problems that left their traditional army in tatters and the humiliating military stalemate with separatist leaders in Chechnya, Russian leaders appear to have refocused on nuclear technology.

In 1999, Putin, who was then chairman of the Kremlin Security Council, said that after a meeting with then-president Boris Yeltsin, the Russian leader had endorsed “a blueprint for the development and use of nonstrategic nuclear weapons,” according to reports from the time.

Western analysts argue that in recent years, Putin has created what became known as an “escalate to de-escalate” doctrine, though Russian documents did not use this phrase. In a report released in early March, the congressional Research Service described that alleged doctrine.

“Russian statements, when combined with military exercises that seemed to simulate the use of nuclear weapons against NATO members, led many to believe that Russia might threaten to use its nonstrategic nuclear weapons to coerce or intimidate its neighbors,” the CRS report stated.

Adam Mount, director of the Defense Posture Project at the Federation of American Scientists, said that the weakness of Russia’s conventional weapons systems might explain potential reliance on nuclear threats.

“In general, if a country can achieve its objectives without nuclear weapons, it will,” Mount said. “Nuclear weapons are tools of the weak.”

Why are some experts worried about nukes in Ukraine?

No country has used nuclear weapons in a war since the United States dropped two nuclear bombs on Japan in 1945. However, Russian officials have made repeated comments about nuclear weapons. Putin announced on Feb. 27, just days after he invaded, that he had moved Russia’s nuclear deterrent forces into alert.

Russia has also shown off new missile technology during its invasion of Ukraine, including an air-launched ballistic missile called Kinzhal that can travel at hypersonic speeds, as well as a long-range cruise missile called Kalibr.

Both missiles are considered dual-capable, Mount said, meaning they could carry a conventional weapon or a nuclear warhead — a significant problem for Western militaries, as they might not know it is a nuclear strike until one explodes. But so far there is no sign that Russia has moved its tactical warheads out of storage, Mount added.

Bidgood said that she rated the risk of nonstrategic weapons in Ukraine as low, but increasing.

“Putin seems to feel confident that he can use veiled threats and signals to escalate and de-escalate to suit his needs,” Bidgood said. “But that’s a very dangerous game and one that can easily lead to miscommunications and misinterpretations.”

Mount said that the public anxiety over the use of nuclear weapons in Ukraine “has far outstripped the actual risk,” so far at least. “The risk increases as Putin becomes more desperate, but the fact remains that nuclear use would not help him win the war or cause Washington to abandon Kyiv,” Mount said.

It is not clear how the United States would respond if Russia detonated a tactical nuclear weapon. Ukraine is not a NATO ally and it is not bound by treaty to protect it. But U.S. officials have spoken of how seriously they would take such an instance.

In 2017, then-Air Force Gen. John E. Hyten took exception to the idea that tactical nuclear weapons were really anything different than a strategic nuclear weapon. Hyten, who was at that point overseeing U.S. nuclear weapons as the chief of U.S. Strategic Command, described how the United States could respond if another country used them.

“It’s not a tactical effect, and if somebody employs what is a nonstrategic or tactical nuclear weapon, the United States will respond strategically, not tactically, because they have now crossed a line, a line that has not been crossed since 1945,” Hyten said.