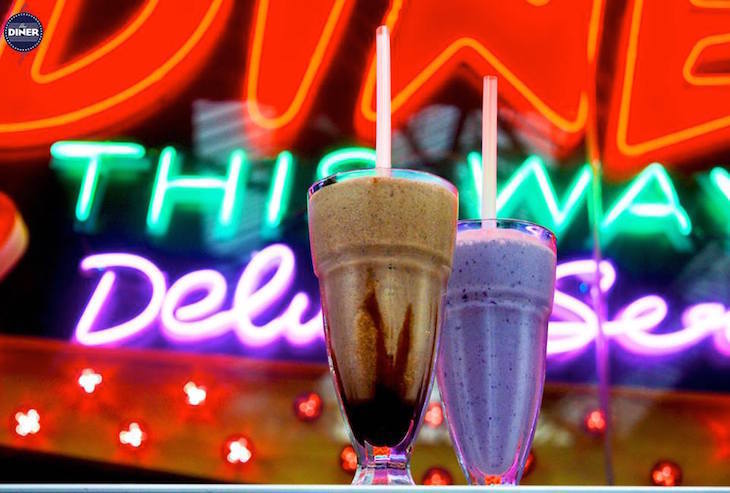 A familiar refrain if you’re swerving alcohol (see also: “What, not even beer?” and “Oh, but you will if I slip some vodka into your lemonade”). If you’re avoiding alcohol, be it for health or religious reasons, or simply because *whisper it* you don’t like the taste, London can feel like a lonely place, a barren wasteland in a sea of craft beers, flavoured gins and ever-more convoluted cocktails. Even museums and bowling alleys have bars, for goodness sake, so what’s one to do for a teetotal night out with more than a watered-down OJ for company?

The obvious answer is to move your date/mates meet-up to an alcohol-free bar. London’s short of these, perhaps due to the fact that ‘alcohol-free bar’ doesn’t make for a sensible business plan. In fact, the only completely alcohol-free bar we’ve ever known about was Redemption Bar, a mini-chain which had branches in Notting Hill, Shoreditch and Covent Garden. Unfortunately, it became a victim of the pandemic and all branches are now closed, though they do promise that “this is certainly not the end of our journey” so we hope to see them back in some form soon — watch this space.

London has a few completely alcohol-free restaurants, and is awash with BYOB places to eat. You can still enjoy a fantastic meal, but if you’re not interested in alcohol, don’t bring any alcohol — simple (note: scrounging a glass of vino from the couple at the next table halfway through the meal is highly frowned upon).

Veggie and vegan restaurant Bonnington Cafe is an unlicensed premises. It’s also a fairly budget-friendly place for dinner, as it’s very community-focused (so no rowdy drunks), with a rotating team of local members doing the cooking. You’ll need to book in advance.

Soho’s famous vegetarian restaurant Govinda’s is part of the Radha-Krishna Temple, belonging to the Hare Krishna spiritual movement. The menu is predominantly Indian, but other cuisines are available too, and drinks are purely hot drinks or soft drinks — no alcohol.

Legendary Persian venue Persepolis in Peckham operates a BYO policy in its cafe, the brilliantly named ‘Snackistan’. ‘Bevvies’ on the cafe’s own menu include mint tea, mango smoothie, and sour cherry juice. Beyond that, it’s up to you to bring your own, but honestly, the food’s so good, why would you cloud your enjoyment of it?

There isn’t a shortage of BYO curry houses around town, but if you want some serious quality food, head to Tayyabs, Whitechapel’s famed North Indian restaurant, for some of the best lamb chops, grilled meats and naan breads.

It’s not completely alcohol-free, but options are limited at bikers’ haunt Ace Cafe on the North Circular — which make sense when you think that most of the customers drive (or ride) there. Focus instead of the hearty food: full breakfasts, filling burgers, and towering knickerbocker glories.

These are just a tiny selection of London’s many BYO restaurants — see our full list for further ideas.

If you’re happy for those around you to carry on making merry while you indulge in a non-alcohol alternatives, seek out London’s best mocktails, and alcohol-free beers. Most watering holes have a token mocktail or two on the menu, but there are some places that really go all out in making teetotal customers as welcome as their beer-swigging chums:

We lament the loss of The Book Club’s zero proof menu, a whole page of booze-free cocktails. However, its sister venue Colours in Hoxton offers alcohol-free options of most of its cocktail menu

This swanky Mayfair hotel is serious about its booze (it has its own house-distilled gin), but patrons wishing to keep a clear head are also catered for. The cocktail menu is split into several sections, with at least one alcohol-free option in each section (it’s not always clear from the descriptions which ones are alcohol-free, but the prices are a clue). The Wayfarer, for example, consists of Sipsmith FreeGlider, clarified berries yoghurt, and sugar syrup.

With prices averaging £13 for a non-alcoholic cocktail and £20+ for the boozy equivalent, this is somewhere for a special occasion.

The Permit Room at Dishoom, Shoreditch

The Shoreditch outpost of this ever-popular Bombay restaurant has a dirty little secret: The Permit Room. Designed to replicate the ‘permit rooms’ of prohibition-era Bombay, where only those with a permit were served booze, it focuses on hardcore traditional cocktails — Juleps, Old Fashioneds and the like. So far, so tipsy, but there’s an extensive Teetotal Tipples menu too, offering sober alternatives of those traditional drinks. Think ‘Sober Martini’ and ‘Dry Old Fashioned’, their ingredients concocted to make it hard to believe there’s no alcohol.

Take a look at our choices of London’s best mocktails for further booze-free cocktail inspiration.

If booze-free beer is more your bag, keep an eye out for products from these companies on your next night out:

Leyton-based Nirvana Brewery creates 0% and 0.5% non-alcoholic beer, inspired by the entirely uninspiring range that already exists. Pale ales, lagers, stouts and IPAs are all available, with as much taste and variety as their traditional counterparts. There’s an online shop too, ideal for stocking up before barbecues and picnics, but you can also swing by the taproom to try the wares and see what it’s all about.

Small Beer Brew Co. specialises in ‘small beers’ — that’s beer with 0.5%-2.8% ABV. It’s stocked at selected pubs and beer shops, and most branches of Majestic Wine, so keep an eye out in your local.

Places with a such outstanding non-alcoholic drinks, you’ll be glad you’re swerving booze

“Go hard or go home” doesn’t just apply to 2am sambuca shots. Milkshakes, freakshakes and smoothies all count as ‘upping your drinking game’ as far as we’re concerned. Load up on sugar and fruit in liquid form at the following venues — just brace yourself for that sugar crash:

This American grill has a regularly rotating menu of completely OTT freakshakes. Garishly colourful, drowning in sugar, and towering high with sweet goodies that definitely don’t belong in a drink — exactly how a freakshake should be. If you’re into American food — juicy burgers, messy ribs, crunchy onion rings — you’re in the right place, but be warned, the freakshake is a meal in itself, so go easy when ordering.

We’ve lost count of the times we’ve eaten at an American diner, with a friend who orders a pretentiously hip imported craft beer, only to catch them enviously ogling our milkshake mere minutes later. Well guess what? Londonist doesn’t share food. You want your dinner with a side of milkshake? Get your own.

For our money, you’ll get some of the best milkshakes at The Diner (previously a chain, sadly now only in Camden). Around nine flavours are usually available (with some vegan options too), but through rigorous tasting, we’ve reached the conclusion that mint choc chip is the best accompaniment for a carb-heavy meal — it washes down those cheesy chips a treat. For a really retro experience, order yourself a coke float.

Whether you’re on the booze or not, bubble tea is worth trying once, just for the sheer oddness. The Taiwanese drink is very sweet, containing grains of tapioca with form the bubbles, and available in many flavours — and you can usually mix and match your base flavour with your bubble flavour. Mooboo, Biju and Bubbleology, all with multiple branches are all solid — well liquid — options.

“Drinking vinegars, elixirs and infused kombuchas” is the way Little Duck Picklery describes the seasonal drinks served at its intimate restaurants, The Picklery in Dalston and Ducksoup in Soho.

Yes, wine is on the menu too, but let’s focus on the other drinks. It’s all fermented in house, and changes seasonally, but an example menu includes Pear and Celery Kombucha, Quince Drinking Vinegar, and Cranberry Drinking Vinegar.

Who says a night out with friends has to revolve around bars and pubs at all? London’s got plenty of other venues open all evening, ideal for meeting up for a catch up, or even a date.

London’s awash with late night coffee shops. Some of them do serve booze (the Grind chain, for example, as well as legendary venues Bar Italia and Scooter Caffe), so if you want a completely alcohol-free venue, it’s worth checking before you go. Your best bet, if you’re not too much of a coffee snob, is the large chains — Starbucks, Costa and Caffe Nero often stay open until 10pm at certain central London branches.

Notting Hill’s Hummingbird Bakery is open until 7pm seven days a week, and we cannot over-exaggerate how much we advocate swapping a post-work pint for a post-work slice of rainbow cake. Fancy cake and coffee shop L’Eto stays open late (9pm in Belgravia and 11pm Brompton), and cafe-du-jour Elan stays open until midnight at some branches, giving you approximately 7 hours of post-work coffee-drinking (and cake-eating) time.

Previously a reserve for great aunt Mildred and her chums, tea bars are becoming hip and… no, wait, hear us out. Covent Garden is now home to huge tea emporium Mariage Freres, with its own tea salon open until 8pm every night.

You can pick up dinner and a cuppa at Vauxhall’s Tea House Theatre, which opens until 10pm or 11pm most nights. Even Whittards is in on the act, its Covent Garden Tea Bar serving up tea and cake until 6pm most nights.

At most of London’s ice cream bars and gelaterias, the closest you’ll get to alcohol is a scoop of rum and raisin, and many are open until late, particularly in the summer.

Venetian import Grom is open until 11pm on Piccadilly, and if you take your scoops to go, you might just make it to Green Park before it melts. Similarly, Gelupo near Piccadilly Circus opens until 11pm/midnight depending on the day, with a menu that changes daily and unusual flavours including avocado, or roasted plum.

Plenty of London museums stay open late on a regular basis, and yes, the majority of them do have bars and cafes which serve alcohol, but there it’s possible to swerve them. For example, Science Museum’s Shake Bar focuses on ice cream and milkshakes, and is often open during the monthly Lates.

Go for breakfast or brunch instead

It’s not a late-night option, but considering you know you’re going to wake up footloose and hangover-free, why not embrace the early mornings and meet your friends for breakfast or brunch instead of the usual pub?