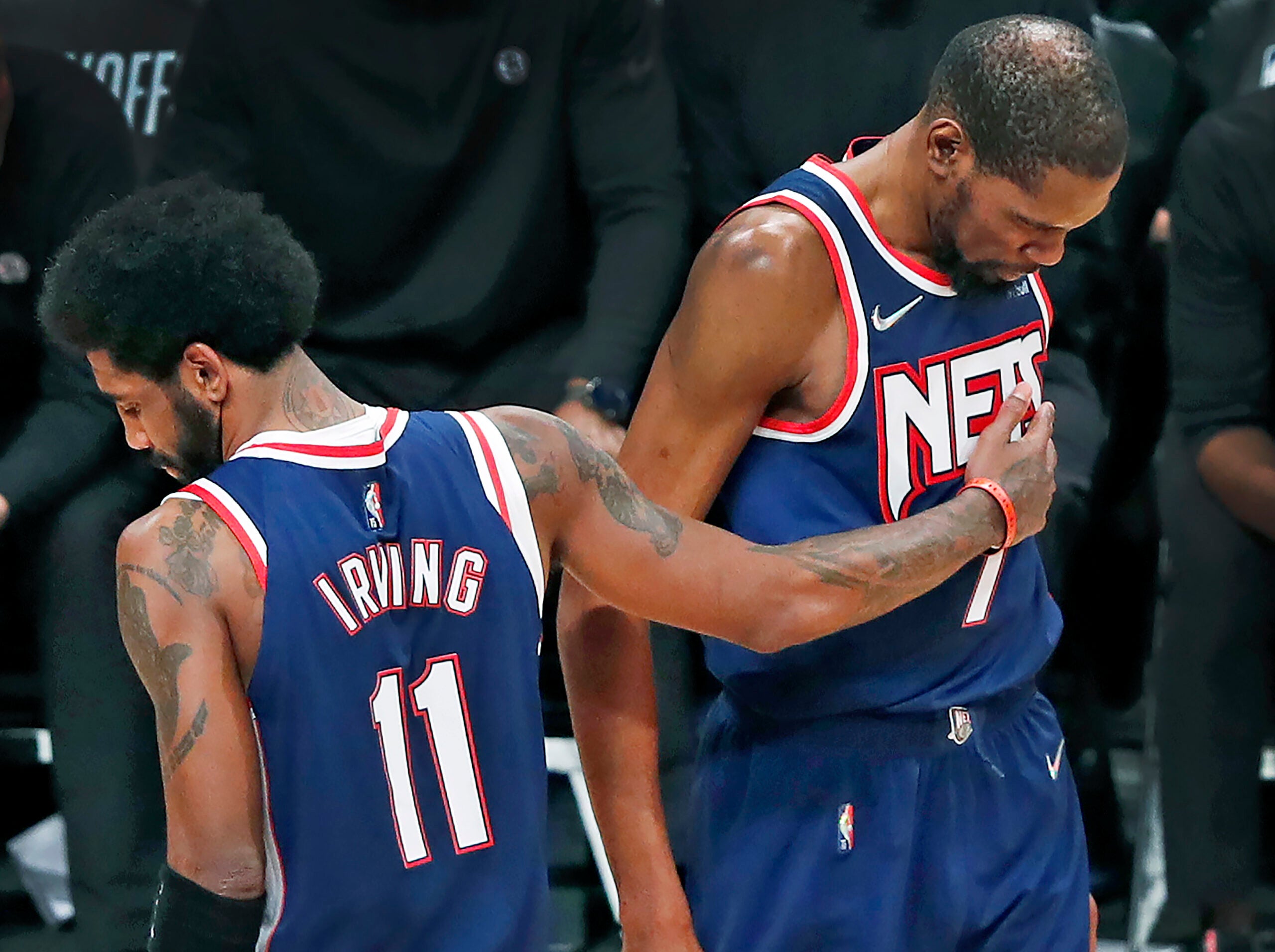 The Celtics held on to defeat the Nets 116-112 in Monday’s Game 5 of the first-round Eastern Conference series. With the win, Boston eliminated Brooklyn 4-0 series sweep.

Tonight, the Bruins host the Panthers at TD Garden. The puck drops at 7 p.m.

Kyrie Irving’s post-series comments: Following the Celtics’ win over the Nets in Game 4 — completing the series sweep — Kyrie Irving answered reporters’ questions about his team’s playoff exit, as well as his future.

Asked for his initial postgame thoughts, Irving said he was “heavy, emotionally,” but added praise of his former team.

“Now that the series is done, we can congratulate the Boston Celtics for doing what they came to do,” said Irving. “[They were] doing what they were supposed to do, just closing out very mature and doing all the little things.”

As for his view of his current team, Irving explained the range of his feelings.

“Disappointment, sadness, but also more importantly, on the positive side of this, motivation,” Irving said. “It’s just burning in my heart right now. I know so many people wanted to see us fail at this juncture. You know, picked us as contenders and had so much to say at this point. So I’m just using that as fuel for the summer and coming into the season starting from October and just getting a good start as a team.

“Hopefully we don’t run into any barriers and we can just start fresh and be realistic with our own expectations and live with our team results rather than being the polarization of kind of the media scrum and having our names be dragged for a series that naturally happens in people’s careers. It’s definitely exciting to have this motivation going into the summertime.”

Ahead of next season, Irving has a player option that he could choose to exercise. Asked about his future, the 30-year-old appeared to signal his intention to stay in Brooklyn with Kevin Durant.

“I don’t really plan on going anywhere,” Irving said in response. “This is added motivation for our franchise to be at the top of the league for the next few years. I’m just looking forward to the summer and building with our guys here.

One of the biggest issues the Nets faced throughout the now-concluded 2021-2022 season was Irving’s COVID-19 vaccination status. By electing to not get vaccinated, Irving was ineligible to play for much of the season.

That, coupled with other issues that the Nets faced (including injuries, and Ben Simmons’s extended absence), hindered the team’s ability to — as Irving described — “jell” down the stretch.

Irving acknowledged his vaccination status (and the ensuing ramifications) was a “distraction.”

“I felt like I was letting the team down at a point where I wasn’t able to play,” Irving told reporters. “We were trying to exercise every option for me to play. But I never want to just be about me. It became a distraction at times.”

Irving, whose NBA career began with the Cavaliers, played for the Celtics for two seasons before he left to sign with the Nets as a free agent in 2019.

Trivia: The draft pick that the Cavaliers eventually used to select Kyrie Irving first overall in 2011 was originally acquired in a trade with the Clippers earlier that year. What two-time All-Star was also traded to Cleveland as part of the deal?

(Answer at the bottom).

Hint: He was drafted third overall by the Charlotte Hornets in 1999.

The clinching bucket in Game 4:

On this day: In 1964, the Celtics defeated the San Francisco Warriors 105-99 in Game 5 of the NBA Finals, completing a 4-1 series victory and clinching the team’s unprecedented sixth straight title.

Though Warriors center Wilt Chamberlain led the game in both points (30) and rebounds (27), he was unable to overcome the combined efforts of seven future Hall of Famers who lifted Boston to yet another championship. Bill Russell finished the game with 16 points, six assists, and 26 rebounds.

Daily highlight: Connecticut native George Springer made a sensational catch against the Red Sox on Monday.