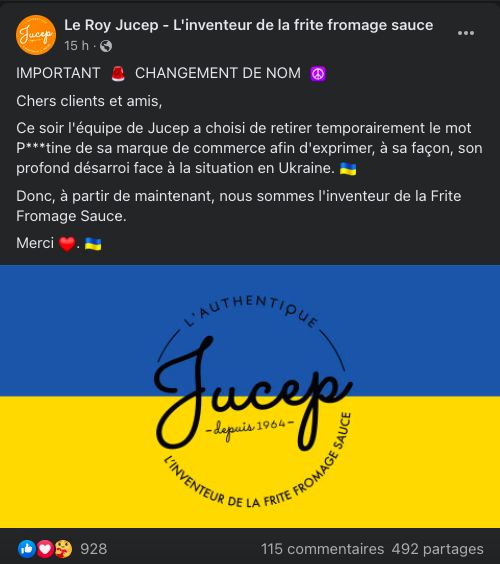 What would anyone in Quebec call the province’s famous dish of French fries and cheese curds topped with gravy?

Don’t call it a poutine if you’re down at Le Roy Jucep in Drummondville – at least not for the next little while.

The self-proclaimed inventor of the poutine, Le Roy Jucep is doing its part to show solidarity with the people of Ukraine.

In a now-deleted Facebook post, the restaurant about 107 km southeast of Montreal decided to remove the word poutine from its name on social media to “express, in its own way, its profound dismay faced with the situation in Ukraine.”

And it’s all because of a phonetic peculiarity regarding Russian President Vladimir Putin’s name when translated into French.

Francophones spell his name as “Poutine,” not Putin, because pronouncing his name as it is commonly spelled sounds very close to a common French curse word.

The restaurant owner says the post was removed because of the negative feedback received.

But the restaurant’s Facebook page still calls itself the inventor of the “fries cheese sauce” – not the poutine. Le Roy Jucep claims to have invented poutine in the 1950s. It is indeed a famous spot that’s seen many politicians stop by, including Justin Trudeau.

CityNews reached out to the restaurant and spoke to management over the phone. They said they were overwhelmed by the situation and attention since the post and couldn’t provide any further comment.

Despite some negative reaction, others on social media were quite supportive of the gesture.

“Bravo! Nice show of support, we love you! Proud to be from Drummondville!” wrote Sébastien Organde on Facebook.

Added Anne-Marie Duquette in a comment: “For all those who say this would have no effect: empathy and solidarity is not noting.”

It seems Le Roy Jucep’s move attracted attention all the way in Ukraine.

On Saturday, the restaurant shared a Radio-Canada interview on its Facebook page in which a Ukrainian woman acknowledges the diner’s actions.

“Very touching to learn that our small message of support travelled all the way from Drummondville to Ukraine,” Le Roy Jucep wrote.

“We managed to make someone smile over there, that’s a small victory.

“Our heart is with you.”

The post What does Quebec’s traditional poutine have to do with denouncing Vladimir Putin? appeared first on CityNews Calgary.