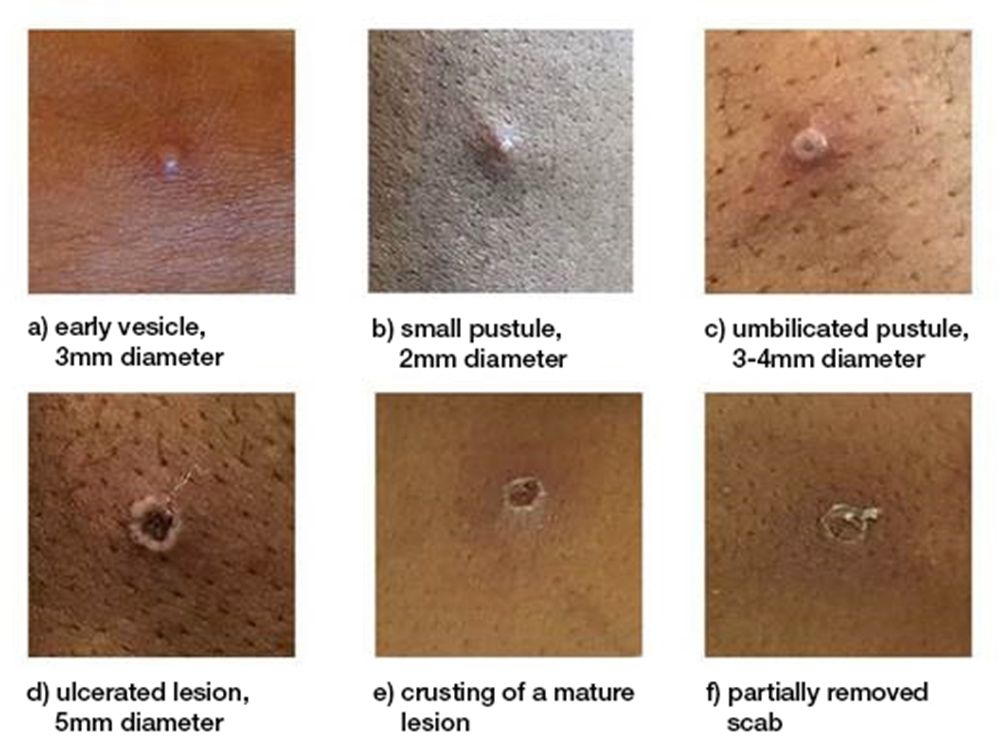 Canada has identified more than 1,000 monkeypox cases, with the majority of them in Ontario and Quebec. As the virus spreads, many are wondering how to identify a suspected case. What are the symptoms and what distinguishes the monkeypox rash from sores caused by chickenpox and acne?

Health officials say that the first thing you should do if you notice something unusual on your body is to contact a health-care provider who will determine if you should be tested for the disease. To avoid contracting the virus, the Public Health Agency of Canada (PHAC) recommends staying home if you have symptoms, practicing safe sex, maintaining good hand hygiene and wearing a well-fitted mask when appropriate.

In Canada and in other countries, most cases have been identified in men who have sex with men, although monkeypox is not a sexually transmitted infection. It spreads through skin-to-skin contact with an infected person. More recently, the U.S. and Germany have identified cases in children and anyone can contract the virus.

If you think you may have a monkeypox rash, here’s how experts say you can identify it.

How does the rash develop?

While the rash is the most identifiable symptom of monkeypox, most cases begin with a fever, which may be accompanied by chills, swollen lymph nodes, headache, muscle pain, joint pain, weakness and fatigue. This first “invasion stage” typically lasts up to five days, according to PHAC. The “skin eruption stage” begins one to three days after the onset of fever. PHAC says the incubation period from the time of exposure is between 5 and 21 days.

The World Health Organization says the rash tends to be more concentrated on the face and extremities rather than on the trunk. It affects the face in 95 per cent of cases, palms of the hands and soles of the feet (75 per cent), genitals (30 per cent) and inside the eye (20 per cent). But PHAC says that the current outbreak is not presenting in the typical fashion, with some people developing exclusively oral, genital or perianal lesions.

What are the stages of the rash?

The rash caused by monkeypox is broken into four stages: macular, papular, vesicular and pustular.

According to the CDC, the rash starts out as macules, when the lesions first appear as flat areas of discoloured skin. Then they become papules, progressing to raised bumps.

When they become vesicles, they resemble a small blister — a raised bump with clear fluid. The first three stages last one to two days each. Then the lesions develop into pustules. This stage typically lasts five to seven days. The lesions become filled with opaque fluid and are round and firm to the touch.

Lastly, they develop a depression in the centre (umbilication) and about a week later they begin to harden and form a crust. In the following week or two, the rash will completely scab over and eventually fall off. Some people will develop pitted scars. According to the CDC, a person is still contagious until a fresh layer of skin has formed.

Dr. Richard Lester, director of Neglected Global Diseases and an associate professor in global health at the University of British Columbia, said that individuals with the following symptoms should contact their doctor for testing and possible treatment.

“The key features to consider monkeypox include skin lesions that may look like pimples but often start as vesicles (clear blisters) before becoming pustules (white pussy head more common with pimples) and they are often painful or itchy even without being squeezed or manipulated,” he said.

How do I know if my rash is monkeypox — and not something else?

The monkeypox virus is a “cousin” of smallpox, which has been eradicated, said Dr. Isaac Bogoch. But monkeypox and chickenpox are “completely unrelated.”

Chickenpox and monkeypox are “viruses and they both impact the skin. Chickenpox is a completely different virus. Sometimes the lesions of chickenpox may resemble those of monkeypox,” said Bogoch, a clinician and researcher focusing on tropical diseases, HIV, and global health issues.

According to PHAC, chickenpox tends to appear on the trunk of the body, while monkeypox is more predominant on the face or extremities. The chickenpox rash is generally throughout the body, with lesions in close proximity.

While monkeypox does appear to look like a pimple at first, if it changes appearance, it may be monkeypox. When distinguishing if a bump is a pimple or monkeypox, the best thing to do if you are feeling discomfort is contact your doctor. A test is the only way to know for sure.

According to PHAC, the monkeypox rash can itch and may be painful in some cases. Nevertheless, most people recover on their own after a few weeks.

Ollie Sinha, a British TikTok influencer with over 400,000 followers, shared his experience with the rash in a recent video.

“My first symptoms were having a very high fever and sweating a lot at night a couple of days before the first lesions had shown up,” he said.

He said that after a couple of days his fever disappeared and he thought he was fine, but then he started to notice small red bumps forming on his skin. He said the bumps got bigger and he was “in more pain than I had ever been in my life.”

“It was excruciating. I was crying,” he said.

Wesley Wallace, a man from Houston who contracted the virus, appeared in a KHOU 11 broadcast with visible symptoms of a rash on his face to describe what monkeypox feels like, so others know they are not alone.

He said he had eight lesions above his chin and one inside his mouth and that he experienced extreme flu-like symptoms, such as chills, body aches and a sore throat.

“If you hear of a friend or loved one that has this, message them, support them, ask them if they need anything, just let them know that they’re not some sort of pariah that they’re not dirty and that it’s going to be okay, it’s not lethal it’s just very temporary and it’s scary for the moment,” Wallace said.

For more health news and content around diseases, conditions, wellness, healthy living, drugs, treatments and more, head to Healthing.ca – a member of the Postmedia Network.