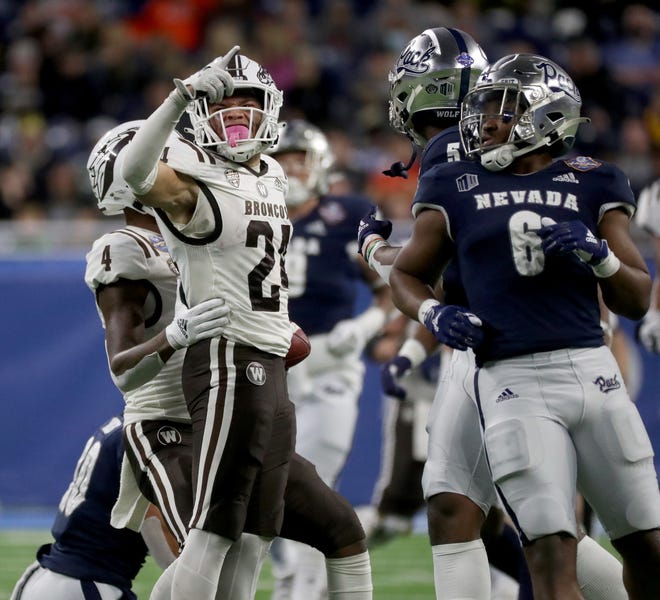 And if the Western Michigan football receiver is being honest, returning to his hometown and playing for his good friend’s father would make for a pretty cool start to his NFL career.

“It’s a storybook ending if I land with the Steelers,” Moore said Wednesday. “But I’m also open to any other team.”

Moore put himself firmly in the Day 2 draft mix with a big junior season for the Broncos and could boost his stock even more with a strong showing at the combine this week, where he is expected to run one of the event’s fastest 40-yard dash times.

Already, Moore has exceeded just about every expectation outsiders had for him when he signed with the Broncos as a late cornerback recruit three years ago.

A quarterback and defensive back at Pittsburgh’s Shady Side Academy, Moore said he never caught a pass until he changed positions at Western Michigan.

He earned all-Mid-American Conference honors as a true freshman in 2019, when he caught 51 passes for 802 yards and three touchdowns, and after a pandemic-shortened 2020, he erupted for 95 catches and 1,292 yards last year.

At 5 feet 10, he projects primarily as a slot receiver in the NFL.

“In a sense (it all) happened like on accident,” Moore said. “I didn’t have a lot of recruitment coming out of high school. I remember (Western assistant coach Bill) Kenny calling me late in the season. He was saying like, ‘Oh, a scholarship got opened up. Would you still like to come to Western Michigan?’ And I accepted it, felt like it was the biggest stage for me and that’s how that happened.”

A quarterback who chucked it deep and took off running quickly in high school, Moore said he spent the past three seasons refining his game at receiver.

He watched cut-ups of NFL players like Stefon Diggs to fine-tune his route running. He adopted receivers coach Greg Harbaugh’s “Alpha receiver” mentality on the field. And he modeled his work ethic after former Steelers receiver Antonio Brown, one of his favorite players growing up.

“No matter what you say about A.B., you can’t take away the work he puts into the game,” Moore said.

MORE FROM THE COMBINE:USC WR Drake London: Amon-Ra St. Brown ‘a big brother’ to me

Moore said playing quarterback in high school helped him understand the urgency he needed to play with at receiver in college, and this week he said he’s “hoping to tear it up in everything” at the combine.

Connor Heyward will take part in tight end drills this week at the combine, but the Michigan State football product said he sees himself as a do-it-all NFL player, much like he was in college.

“A lot of (teams) are asking me where I see myself, as an H-back, fullback, I can be a third-down back, line up in the slot, play tight end,” Hayward said. “Play special teams, as well. I know that’s going to be important in my process. I played special teams at Michigan State. Honestly, I think I can play anywhere on the offensive side of the ball, and I think I’m an offensive weapon.”

A LOOK AHEAD:Ben Johnson has plan to improve Lions offense. Adding a big-play WR would help

The brother of Steelers defensive tackle Cameron Heyward, Connor caught 35 passes for 326 yards last season after switching from running back to tight end in fall camp.

He said he sees himself as a “mismatch” player in the passing game and plans to show why during field drills Thursday at the combine.

“If a linebacker gets on me, I know I can beat him,” Heyward said. “With a safety, I can kind of lean on him. I think a lot of guys think I’m slower than I actually am, and, hopefully, I can show you guys my speed tomorrow.”

Alabama receiver Jameson Williams will not run the 40-yard dash at the combine after tearing his ACL in the Tide’s national championship game loss to Georgia, but Williams said he’d leave no doubt about who the fastest player in the draft was if he did.

“I don’t know no 40 time,” Williams said. “I just know nobody can run with me. Just say whatever the fastest 40 time here, I’m faster.”

Williams, a potential first-round pick in April’s draft, said he was given a five- to seven-month timetable for recovery and expects to take part in training camp for whatever team drafts him.

“I’m ahead of schedule,” he said. “I’m six weeks out of the surgery right now. Like I said, I’ve been walking without the brace for a few weeks. So I hope things keep going on this track and I get back as soon as possible.