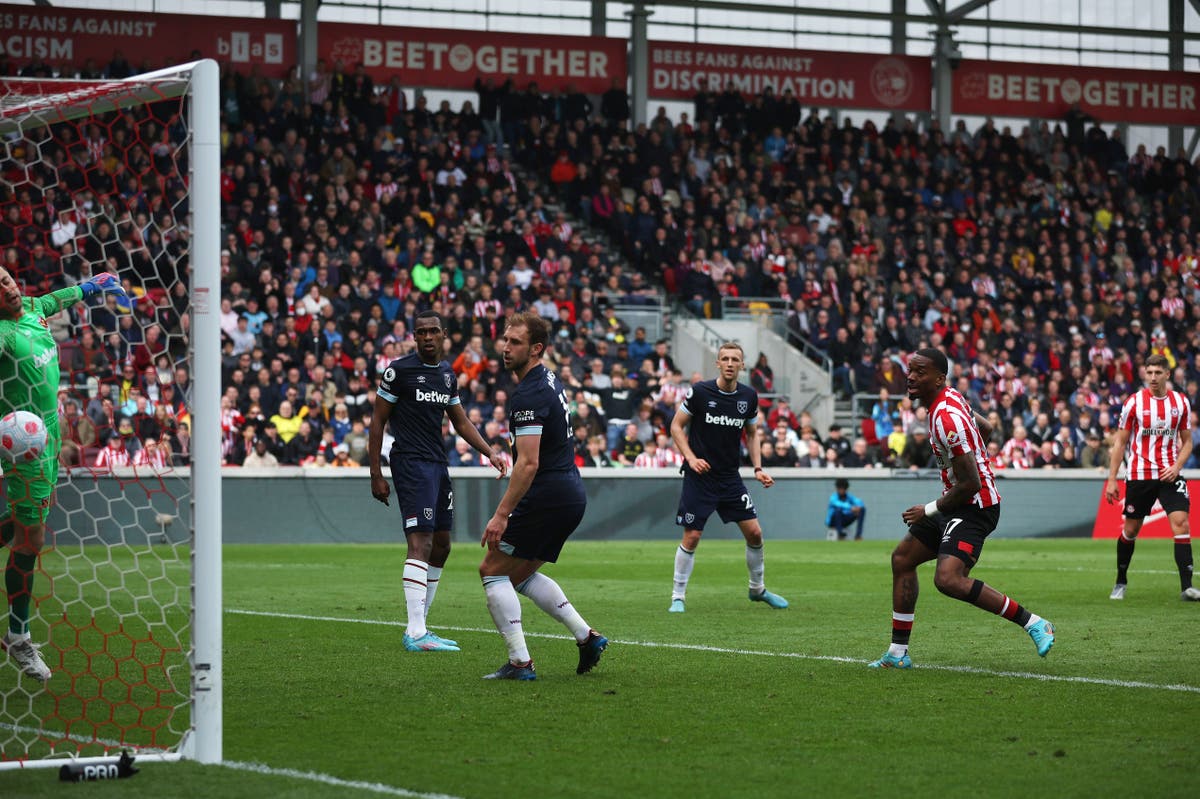 est Ham have already slipped from the top four race this season, and could be in danger of falling further after derby defeat at Brentford.

The top four may be beyond David Moyes’s side but they are still well in the running for another Europa League finish.

If they are to do that, however, they must learn to cope with the rigors of Thursday-Sunday at the business end of the season and punish those who slip up – just as rivals Manchester United and Arsenal did in defeat this weekend.

Instead, West Ham looked a shadow of the side which has got them to within a shot of another remarkable season as Thomas Frank’s buzzing Bees completed a League double over the Hammers thanks to goals from Bryan Mbuemo and Ivan Toney.

Having played 45 minutes with just 10 men on Thursday night, West Ham were sluggish from the off here – the Bees quicker to everything in midfield and more direct going forward.

Lukasz Fabianski twice saved from the energetic Mbuemo, first a header from Rico Henry’s well placed cross before the Pole palmed away a left-footed strike.

West Ham were struggling to make things happen in the Brentford half, only coming close when Tomas Soucek steered a header straight at David Raya from Vladimir Coufal’s cross.

Moyes’ frustration grew when, on the half hour mark, Kurt Zouma fell to the ground in his own box and was forced off having been unable to recover from a challenge by Christian Norgaard five minutes earlier.

The Scot watched on baffled as Brentford found it easy to force openings and would have been ready to explode had Vladimir Coufal’s header over his own bar from Christian Eriksen’s free-kick been an inch or two lower.

Fabianski had to be alive to everything as the Bees continued to push the visitors – the former Arsenal man diving low to stop an Eriksen effort from the edge of the box.

Moyes tried to lift his players at the break but they were just as slack early in the second half, as Toney’s flick from Kristoffer Ajer’s throw-in caught Issa Diop and Aaron Cresswell napping and created the opener.

Having threatened before the break but lacked the cutting edge to take his chances, Mbuemo did not let this one go to waste and fired home at the near post to score his first Premier League goal since December.

Moyes responded quickly, sending Said Benrahma on against his former club, but the Hammers still lacked any cutting edge and they were quickly falling apart at the back too.

Despite having caused so much trouble through the first hour, Mbuemo was left unmarked at the far post as he met another Henry cross, this time turning it back for Toney to head home his eighth Premier League goal since the turn of the year.

It should have been three moments later when, after a chaotic spell of pinball in the West Ham box, Mbuemo could only fire over.

With Thursday’s trip to France in mind and West Ham struggling to lay a glove on their hosts, Moyes withdrew the ineffectual Michail Antonio and seemed resigned to defeat.

The Hammers have largely coped well with their European exertions so far this season, but here they looked cooked from the start.

Having failed to take advantage of their top six rivals slipping up on Saturday, they must ensure they step up the energy on Thursday or they may well have lost the battle on both fronts in the space of five days.