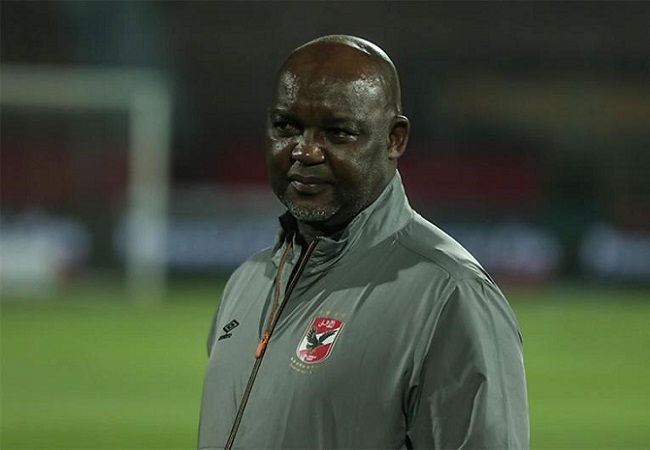 The ongoing CAF Champions League resumes this Saturday with the 1st leg of the semi-finals. Petro Atletico DE luanda are hosting Wydad Casablanca of Morocco at ESTÁDIO 11 DE NOVEMBRO in Angola with a kick-off time at 13:00 GMT. The other semi-final game will see Al Ahly welcome ES Setif of Algeria in WE Al-Ahly Stadium in Cairo to kick off at 19:00 GMT.

Pitso Mosimane might be close to delivering an unprecedented third straight African Champions League title for Ahly. But that has not made him immune from criticism ahead of this semi-final first leg game.

The South African boss, the architect of two back-to-back Champions League crowns for the record 10-time African champions, has been recently under fire after Ahly endured a surprise three-match winless run in the Egyptian Premier League.

Some sluggish displays saw Ahly score just once in three domestic league games, having suffered a 1-0 loss to Masry before being held to a 0-0 stalemate by Talae El-Geish and snatching a last-gasp equaliser in a 1-1 draw with Ceramica Cleopatra.

Their stuttering form is a matter of concern for Ahly’s ever-demanding supporters, who believe the team should be fighting on all fronts with the same intensity.

Last season, Ahly swept to a second successive Champions League crown with a swagger but surrendered a comfortable lead in the Egyptian league to allow perennial Cairo rivals Zamalek to eventually pip them to the title.

But for now, the focus will be on the Champions League as Mosimane, who also won the coveted title with Mamelodi Sundowns in 2016, seeks to equal the record of four-time winner Manuel Jose — Ahly’s iconic Portuguese boss.

Mosimane is known for his shrewd tactics when it comes to high-profile continental games, but Setif are likely to pose a stiff test.

Despite their domestic struggles, as they lie ninth in the Algerian league table, Setif have caused an upset by eliminating Tunisian giants Esperance with a 1-0 aggregate win in the quarters, having secured a stunning away win in the second leg.

“We are back to the big stage of the Champions League. Big game against ES Setif, the team that eliminated Esperance and that shows the kind of opponent that we are playing against.” Mosimane told the pre-match news conference.

“They didn’t defeat Esperance in Algeria but they did it in Tunisia. The team is fearless. They play strong and attack home and away.

“They are a well-coached team. Their goalkeeper is super, in relation to the games we’ve watched.”

The 57-year-old also believes that history does not necessarily count in such games and that Ahly should play to their full strength if they are to reach the final for a record-extending 15th time.

“History sometimes plays a role and other times not. If you see the history of Real Madrid, it plays a role. They are a big club that won the champions league many times. If you go to Bayern when they played Villarreal, history didn’t play a role. I just believe in what is happening on the pitch.” He said.

“Small details matter. Al Ahly have been in the semi-finals many times. We know how to play those kind of games. So, I expect my team to use their experience in tomorrow’s game. We have no excuses.”

Ahly welcome back talented winger Ahmed Abdel-Kader, whose absence in a recent league game deprived the team of much-needed creativity, and burly Malian midfielder Aliou Dieng after both had recovered from injuries.

However, they will have to do without regular central defender Mohamed Abdel-Moneim and central midfielder Amr El-Sulaya, who have failed to shake off knocks in time to feature in the Setif clash.