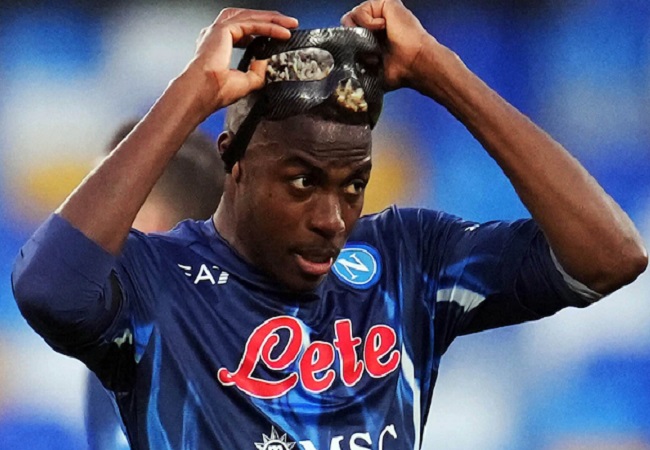 Napoli Victor Osimhen has been slammed with a one-match suspension. And the Nigerian international will not be in Napoli’s matchday squad for the titanic Serie A meeting with Atalanta on Sunday.

Osimhen has received five yellow cards so far this term, making him ineligible to feature in Napoli’s next league fixture.

After receiving a red card in Napoli’s first match of the season in the 2-0 home win over Venezia in August, Osimhen was shown his first yellow card in September against Cagliari. He scored in that encounter to power Luciano Spalletti’s men to a 2-0 triumph at the Diego Maradona Stadium.

The Nigerian star saw two yellow cards in November: the first in the 1-1 draw to Verona and the second against Inter Milan, moments before he suffered multiple facial injuries that required surgery and kept him out of action for almost two months.

Osimhen returned from rehabilitation with a face mask in late January and played without being cautioned through February before he picked up a booking as Napoli fell by the odd goal to visiting AC Milan in March.

The Super Eagles star smashed four goals in two games – against Verona and Udinese. But he was shown a yellow card for a non-existent handball in the match against the Little Zebras for his fifth booking of the campaign.

Osimhen is thus suspended for Napoli’s crucial Serie A clash against Atalanta on Sunday.

Second-place Napoli need all the maximum points to stay in touch with AC Milan, who enjoy a three-point cushion at the top of the league table.

The Neapolitans have not won at the Gewiss Stadium in Bergamo since December 2018. To keep their title hopes alive, Il Partenopei must find a way past Gian Piero Gasperini’s men without their leading goalscorer.