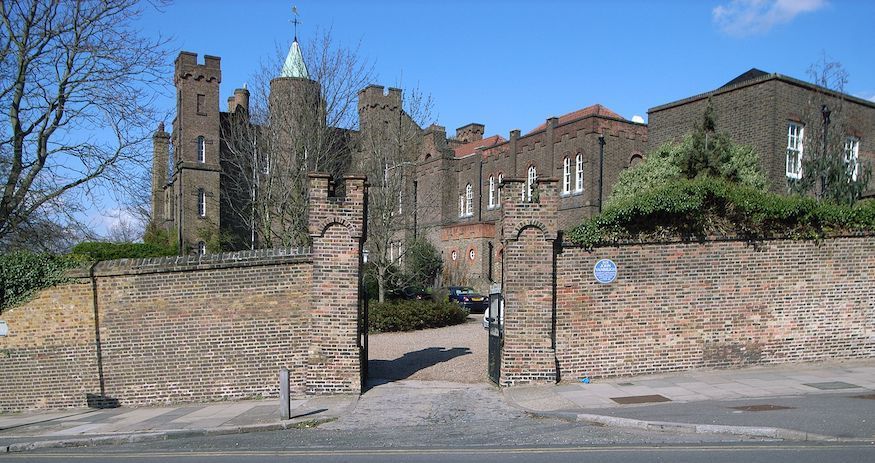 Did you ever notice that castle-like building on the eastern edge of Greenwich Park?

This is Vanbrugh Castle, an imposing red-brick pile designed by John Vanbrugh 300 years ago. Rumour has it that the building was designed to look like the Bastille in Paris. Oh, and there may be a secret tunnel…

First, a bit about the man

Vanbrugh (1664-1726) is well known among architecture fans, but is perhaps not a household name like his colleagues Christopher Wren and Nicholas Hawksmoor (the latter helped along with his modern fame by a certain steak restaurant). That’s unfair, because Vanbrugh gave us such wonders as Blenheim Palace (a World Heritage Site) and Castle Howard (you’ve seen it in Bridgerton and Brideshead).

He created Vanbrugh Castle for himself. It’s built in a light Gothic style and therefore does actually look a bit like a castle unlike, say, Castle Howard. Not many people were building in Gothic at the time, so Vanbrugh was either ahead of the curve, or a few centuries behind it.

What is Vanbrugh Castle?

The Castle was built as a private home, and it serves as such today — albeit four private and very expensive flats. Back in 1993, a five-bedroom apartment in the building could have been yours for a cool £400,000. Today, the price is £2.5 million which, given the location right next to Greenwich Park, sounds like a bit of a bargain — if only we had that kind of money to bargain with.

Besides Vanbrugh, the Castle’s had a number of moderately famous occupants over the years. The novelist Mary Anna Needell (unheard of today, but popular in Victorian times) was born here in 1830. Alexander Duckham, master of lubrication, bought the house in the early 20th century. He eventually donated it to the RAF Benevolent Fund, who used it as a school for boys whose fathers had been killed in service. So it remained until the 1970s when it was briefly abandoned before conversion to flats.

The turrets, towers and crenellations are said to resemble those of the Bastille, the long-vanished Parisian fortress and prison whose notoriety still echoes down the ages from the French Revolution.

It’s an old, old rumour. An Illustrated London News edition from 1906 tells us that the place was once known as The Bastille, and an 1888 profile takes the story back still further. In fact, the connection can be traced back as far as 1792, when “it is said” the castle was built in imitation of the Bastille.

It’s certainly possible. Vanbrugh spent over four years of his 20s imprisoned in France as a possible spy, several months of which were served in the Bastille. He was more than familiar with the fortress and it must have made a lasting impact on his psyche. On the other hand, Vanbrugh Castle is hardly a dead-ringer for the Bastille — more likely its architect channeled a number of influences when putting it together.

Whether true or not, the Bastille connection is now received wisdom, and even celebrated by the local community. The Friends of Greenwich Theatre, for example, held a Bastille party in the grounds of the castle in 1989, to commemorate 200 years since the revolution — complete with faux guillotine and hosted by gameshow presenter Lesley Crowther!

Like any old building in London, Vanbrugh Castle comes with its stories of secret passages. Recent articles advertising an apartment in the building mention “secret tunnels” — though whether they’re genuine, or estate agent fluff is hard to say.

The rumour is again an old one, though. A letter to the Kentish Mercury in 1905 asserts that “There is — or as about 20 years ago — a subterranean passage from the Castle, but where it leads I cannot tell; some say as far as Crooms Hill”.

This seems unlikely. Crooms Hill is the other side of Greenwich Park, which is half a mile away. That said, the whole Greenwich and Blackheath area is riddled with old tunnels and sealed off caverns, so some kind of passage can’t be ruled out.

Besides, if you were a wealthy architect like Vanbrugh, building a castellated house on a hill for yourself, wouldn’t you be just a little tempted to include a secret tunnel or two?