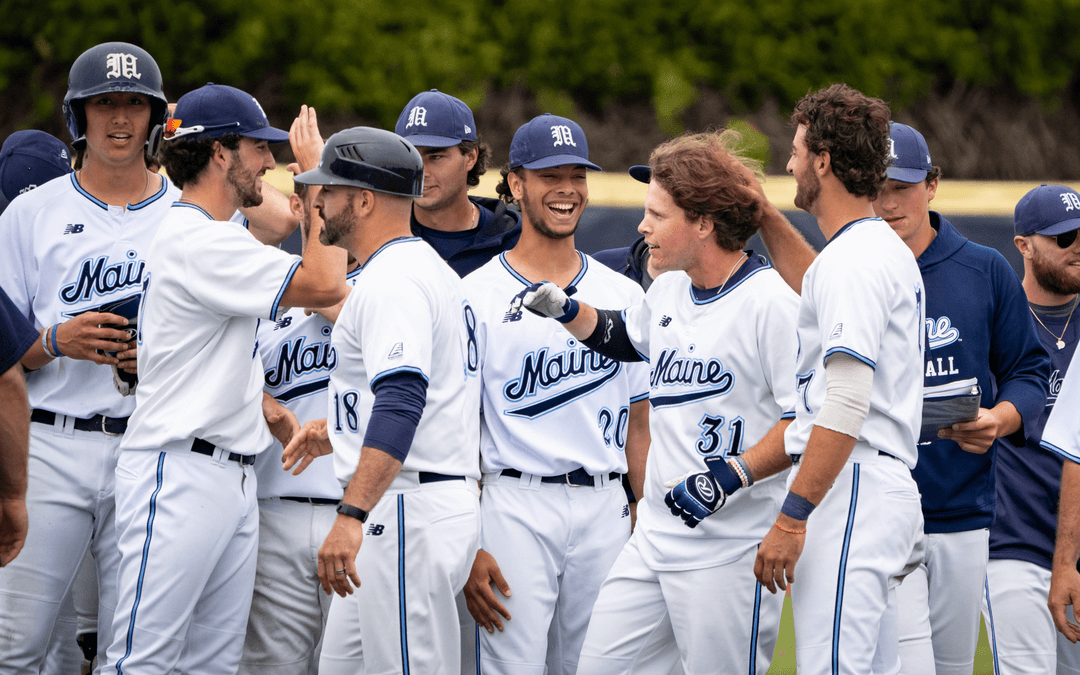 McDaniel made two errors, including a fifth-inning throwing error that helped open the door for a three-run inning by the New Jersey Institute of Technology. The Eliot native later ripped a two-run single to center in the bottom of the ninth inning to give the Black Bears a come-from-behind 7-6 victory at Mahaney Diamond Sunday afternoon.

UMaine trailed 6-2 after the Highlanders’ three-run fifth-inning but the Black Bears scored a run in the sixth and two in the seventh to pull within one before winning it in the ninth.

The teams had split the first two games of the three-game set.

UMaine head coach Nick Derba said that before McDaniel came to bat in the ninth, he thought “here’s his chance to make up for his errors.”

Jake Marquez sacrificed him to second and Myles Sargent came on to pinch-run for Goodman.

Freshman Mike Pratte, playing in place of the injured Jeff Mejia (knee) in center field, was hit by a pitch and both runners eventually moved up on a wild pitch.

Jordan Schulefand walked to load the bases and McDaniel then lined his game-winning single to center.

“This win was significant in all sorts of ways,” Derba said. “We came back to win without our leadoff hitter [Mejia]. We dug ourselves out of a hole we created. And we beat one of the best relievers in the conference [Rappaport] twice this weekend.”

Rappaport wasn’t assessed the loss on Saturday but gave up five runs in two innings of work after UMaine had taken an 8-7 lead.

“We do have a lot to work on but you can’t be upset about anything when you take two out of three,” Derba said.

Derba said the unsung hero of Sunday’s game was sophomore reliever Noah Lewis from South Portland, who threw 4 ⅔ innings of two-hit shutout relief before Schulefand came on to get the final out in the top of the ninth.

“That was a big-time outing by Noah,” Derba said.

Jake Marquez’s RBI single in the sixth pulled UMaine within 6-3 and Jeremiah Jenkins’ single and Joe Bramanti’s double in the seventh set the stage for Scout Knotts’ RBI single and Ryan Turenne’s run-scoring double that sliced the lead to one.

Goodman had his second straight three-hit game. Knotts, Bramanti, Marquez and McDaniel all had two hits with Bramanti and Knotts belting solo homers.

Albert Choi had a homer and three singles for NJIT and Paul Franzoni homered and singled.

On Saturday, the Black Bears squandered a 6-0 lead and fell behind 7-6 in the sixth.

But Bramanti’s two-run homer in the bottom of the sixth restored the lead for good.

Marquez’s RBI single in the seventh extended the lead to 9-7.

Jared Donnelly’s homer in the top of the eighth made it 9-8 but UMaine touched up Rappaport for four more in the bottom of the eighth on Mejia’s RBI single and a three-run double by Goodman, who was starting at third in place of the injured Jake Rainess (broken index finger).

Goodman had three hits and drove in five runs; Knotts also had three including a double and knocked in a pair. Mejia, McDaniel and Schulefand each had two two hits.

On Friday, Ryan Fischer and Evan Gegeckas four-hit the torrid-hitting Black Bears, who had scored 45 runs in a three-game sweep of the University of Maryland Baltimore County the previous weekend.

Fischer earned the win with five innings of four-hit, three-run baseball before Gegeckas hurled four scoreless and hitless innings for the save.

Isaiah Daubon had a two-run triple for NJIT and he also had a single. Luke Longo had three singles and twins David and Julio Marcano had two hits each as did Choi. Choi and David Marcano had doubles.