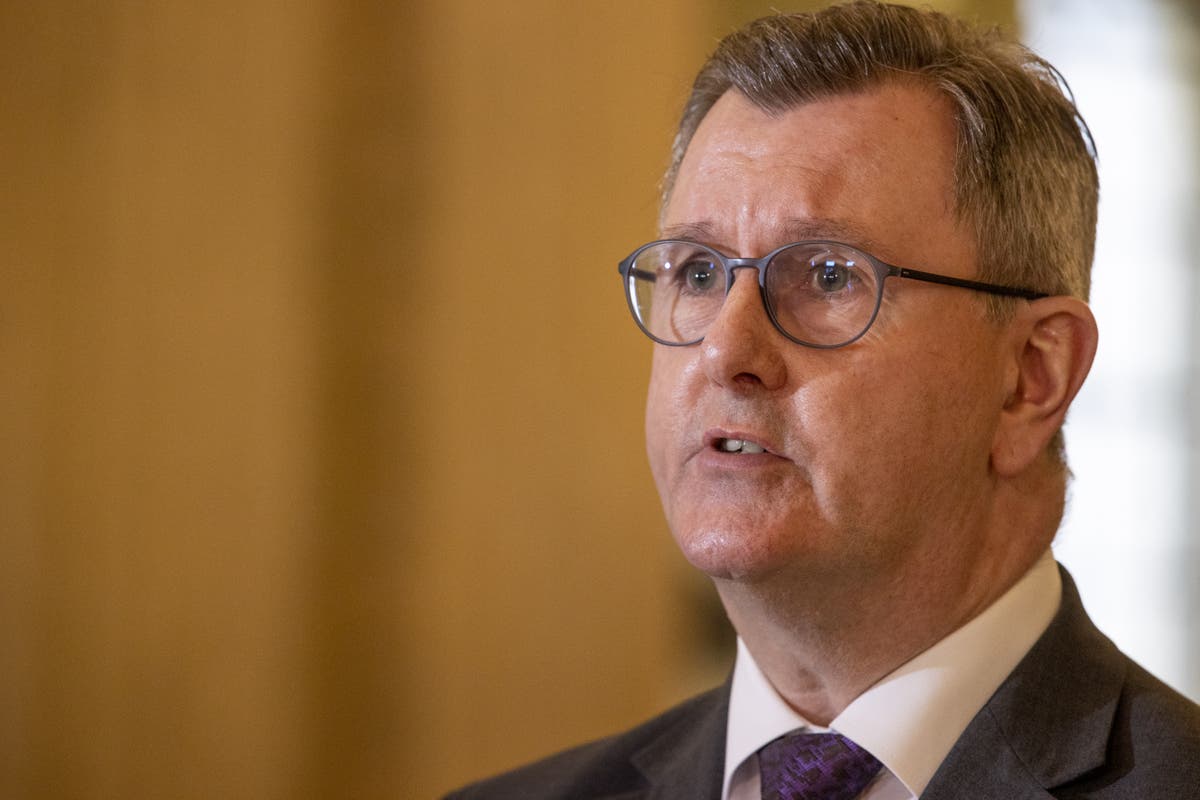 Sir Jeffrey Donaldson was commenting amid suggestions the Government may be reluctant to deepen the dispute with the EU over the contentious Irish Sea trade barriers due to the situation in Ukraine.

Sir Jeffrey also insisted the DUP would continue to attend anti-protocol rallies organised by loyalists in Northern Ireland despite senior MP Sammy Wilson being booed at an event in Co Armagh last month.

Ongoing talks between the UK and EU on ways to reduce the red tape created by the protocol are continuing, albeit the engagements are set to be more low key in the coming months with both London and Brussels mindful of a potentially fractious election campaign in Northern Ireland ahead of May’s Assembly poll.

Sir Jeffrey was asked whether he expects to see Government focus on the protocol diverted due to the conflict in eastern Europe.

“I hope to meet the Deputy Prime Minister (Dominic Raab) early next week, who has asked for a meeting to discuss these matters, and I will be putting the case to him that, of course we must do all we can to support Ukraine, to support the people of Ukraine, but we also have a duty to support our own people and in Northern Ireland the protocol remains a problem and it needs to be addressed.”

The protocol has created new economic barriers on trade between Northern Ireland and the rest of the UK.

Agreed by the UK and EU to ensure no hardening of the Irish land border post-Brexit, it has instead moved regulatory and customs checks to the Irish Sea, with Northern Ireland remaining in the EU single market for goods. The region also applies the EU customs code at its ports.

Unionists and loyalists claim the arrangements have undermined the sovereignty of the UK and have demanded the UK triggers the protocol’s Article 16 mechanism to suspend its trading provisions.

Speaking to the media in Bessbrook, Co Armagh, on Friday, the DUP leader was asked about the abuse directed at party colleague Mr Wilson at an anti-protocol rally in Markethill, Co Armagh, last month.

The episode unfolded as the DUP continues to face criticism from other unionists for its handling of the protocol issue.

Sir Jeffrey said the incident in Markethill was “orchestrated” and had damaged the campaign against the post-Brexit trading arrangements.

He insisted he is not afraid to attend future rallies.

“I will be in Crossgar next Friday evening,” he said. “I have invitations to attend rallies in Ballymoney, in Castlederg and in Lurgan and other invitations are coming in.

“I want to see unity at these rallies. I want to see unionism standing together united in its opposition to the protocol. I think that’s the best message that can be sent out.

“I think that when you consider what happened at Markethill, it damaged the unionist cause, it damaged and harmed our campaign against the protocol and I hope that the people who did that now realise the harm they did in splintering the united opposition of unionists to the protocol, and I hope that they will reflect on that and that those responsible for orchestrating what we saw in Markethill will recognise that it was counterproductive.

“It backfired on them, it harmed unionism, it harmed our cause of opposing the protocol, and I certainly hope we won’t see a repetition of that going forward.

“Unionism needs to stand together on this.”