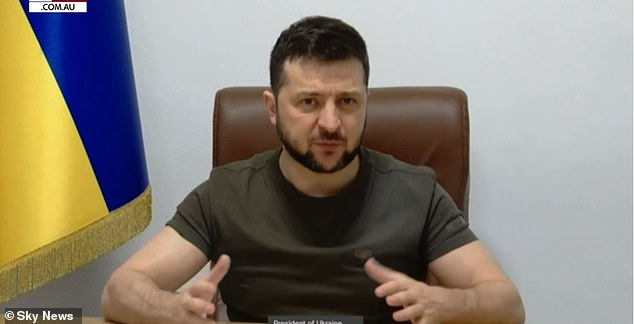 President Volodymyr Zelenskyy has called on Australia to fortify its support to the Ukraine and provide more weapons as Russia continues to wage war on the sovereign nation.

President Zelenskyy received a standing ovation as he addressed Federal Parliament on Thursday afternoon, with the Ukraine leader putting his hand to his heart as both sides of the aisle applauded him as he appeared via video link.

He thanked Prime Minister Scott Morrison for his ongoing support, but said his country still needs more international aid as they hold back Vladimir Putin‘s invasion.

In return, Mr Morrison confirmed Australia will send an extra $25million worth of military aid to Ukraine, including tactical decoys, unmanned aerial and unmanned ground systems, rations and medical supplies.

‘We need your help not in the next couple of months, we need it now. The people of Australia, the distance between our countries is big, we’re separated by oceans and seas, but there is no such thing as distance from the brutality and chaos Russia has brought to the Ukraine,’ President Zelenskyy told Parliament.

‘Whatever is happening in our region has become a real threat to your country and your people, because this is the nature of the evil. It can instantly cross any distance and destroy lives.’

President Zelenskyy received a standing ovation as he addressed Federal Parliament on Thursday afternoon, with the Ukraine leader putting his hand to his heart

President Zelenskyy accused Russia of ‘blackmailing’ the world through nuclear threats and called on Australia to continue to condemn its actions through definitive action.

‘The bipartisan support from Australia, we are extremely grateful. This is only the beginning, we should and can do more. We need powerful sanctions before they stop blackmailing other countries with nuclear missiles,’ he said in his parliamentary address.

He said all Russian ships should be banned from entering international waters and barred from docking in the ports of other countries as the world attempts to stem the country’s financial resources.

‘No Russian vessels should be allowed in other seas. We should stop all business activities of Russia,’ President Zelenskyy told Parliament.

He noted the hundreds of Australians that travelled to the country in 2016 to celebrate the manufacture of the world’s largest plane – the Antonov AN-225, with its nickname translating to ‘Dream’ in English.

Russia destroyed the aircraft on February 22, but the Ukraine president said it would not crush their spirit.

‘We can say that Russia destroyed our ‘Dream’, but no, they just burned down a plane,’ President Zelenskyy said.

‘But not the essence, not the dignity, not our independence.’

The Ukraine leader received another standing ovation from Parliament as he repeatedly thanked Australia for its support at the conclusion of his address.

Since Russia invaded Ukraine on 24 February, Australia has pledged $116million worth of military assistance, $65million of humanitarian assistance and 70,000 tonnes of thermal coal to meet Ukraine’s energy needs.

‘Australia stands with Ukraine. You have our prayers, but you also have our weapons, and there will be more,’ Mr Morrison said in an opening speech to President Zelenskyy.

‘We stand with you Mr President, and we do not stand with the war criminal of Moscow.’

Labor leader Anthony Albanese compared Putin to Adolf Hitler, saying the world needs to stop the Russian dictator before he is responsible for more deaths.

Since Russia invaded Ukraine on 24 February, Australia has pledged $116million worth of military assistance, $65million of humanitarian assistance and 70,000 tonnes of thermal coal

Mr Morrison’s office announced new tariffs on Russia and Belarus in response to their continued efforts to invade Ukraine.

From April 1, Australia will withdraw its Most-Favoured-Nation tariff and apply additional 35 per cent fees on all Russian and Belarusian imports.

The timing of Mr Zelenskyy’s speech has been widely questioned in Canberra, with Labor leader Anthony Albanese’s response to Tuesday’s Budget announcement overshadowed by the presence of the Ukraine president.

President Zelensky has addressed several parliaments including in the UK, US, Canada and EU to thank allies for help to defend his nation.