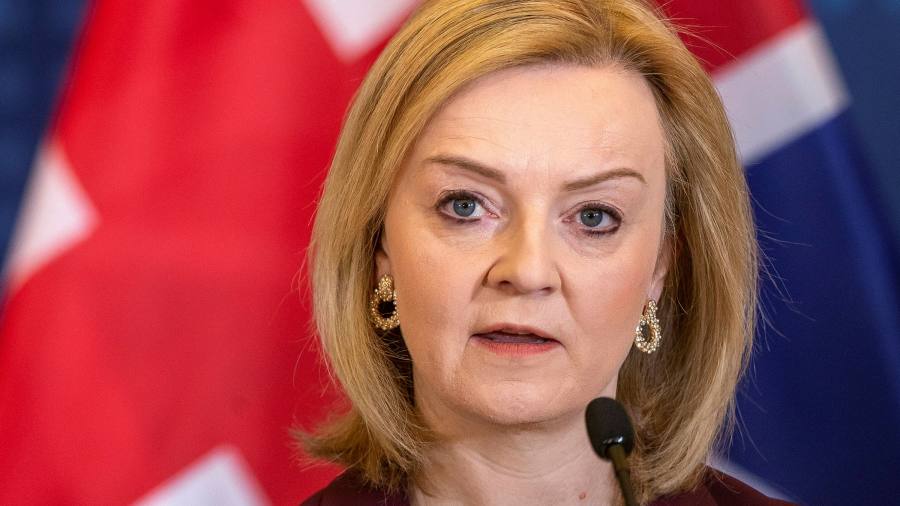 Liz Truss, UK foreign secretary, warned on Thursday that Britain would have “no choice but to act” after talks with Brussels on post-Brexit trade checks in Northern Ireland ended in deadlock.

Truss “noted with regret” that Maroš Šefčovič, European Commission vice-president, had indicated in the talks that the EU’s position on the Northern Ireland protocol, which governs post-Brexit trade in the region, would not significantly change.

The lack of progress was widely expected, but it clears the way for UK prime minister Boris Johnson to announce legislation, possibly as early as next week, that would allow Britain to unilaterally override parts of the protocol.

The UK government has received legal advice that it would be justified in overriding parts of the protocol, in order to support the 1998 Good Friday Agreement that brought peace to the region.

But Šefčovič warned that the EU could end Northern Ireland’s access to the bloc’s single market if the UK went ahead.

“Unilateral action will also undermine the conditions which are essential for Northern Ireland to continue to have access to the EU single market for goods,” he said in a statement after the talks.

Under the terms of the protocol, which was agreed to ensure there was no border on the island of Ireland, goods produced in Northern Ireland can enter the EU without checks, which has helped the region’s economy outperform much of the rest of the UK.

Johnson was warned when he negotiated the arrangements that they would create political problems in Northern Ireland as the protocol creates a trade border in the Irish Sea and leaves the region in the EU’s single market for goods. It also provides for an open land border on the island of Ireland.

Truss told Šefčovič that fundamental changes were needed to the trading rules, which are opposed by Northern Ireland’s pro-UK unionist parties.

She argued that unless checks on trade from Great Britain to Northern Ireland were greatly reduced, there was no prospect of the main unionist party, the Democratic Unionist party, rejoining the region’s power-sharing executive at Stormont.

London believes that reforms to the agreement suggested by the EU in October do not go far enough, and Truss told Šefčovič that Brussels “bore a responsibility to show more pragmatism” in their negotiations.

But EU member states have insisted they are not prepared to renegotiate an international treaty that only came into effect at the start of last year. Their priority is to protect the EU single market, which allows goods to circulate freely within 27 countries once they have crossed the union’s external border.

“The EU simply expects that international agreement to be honoured and is willing to be extremely flexible in terms of how it is honoured to try to accommodate what are genuine concerns in Northern Ireland from business people and from the unionist community in particular,” Simon Coveney, Ireland’s minister of foreign affairs, told RTE radio on Thursday.

Legislation to override the protocol is expected to receive a rough passage through Britain’s parliament. Some Conservative MPs are likely to resist any move that would rip up parts of Britain’s Brexit treaty with the EU, and the House of Lords is also expected to be hostile.

Šefčovič said the UK’s threats to override the protocol would “undermine trust between the EU and UK as well as compromise our ultimate objective — to protect the Good Friday (Belfast) Agreement in all its dimensions”.

He also suggested that the move would empower rogue states such as Russia. “The EU and the UK are partners facing the same global challenges where upholding the rule of law and living up to international obligations is a necessity.”