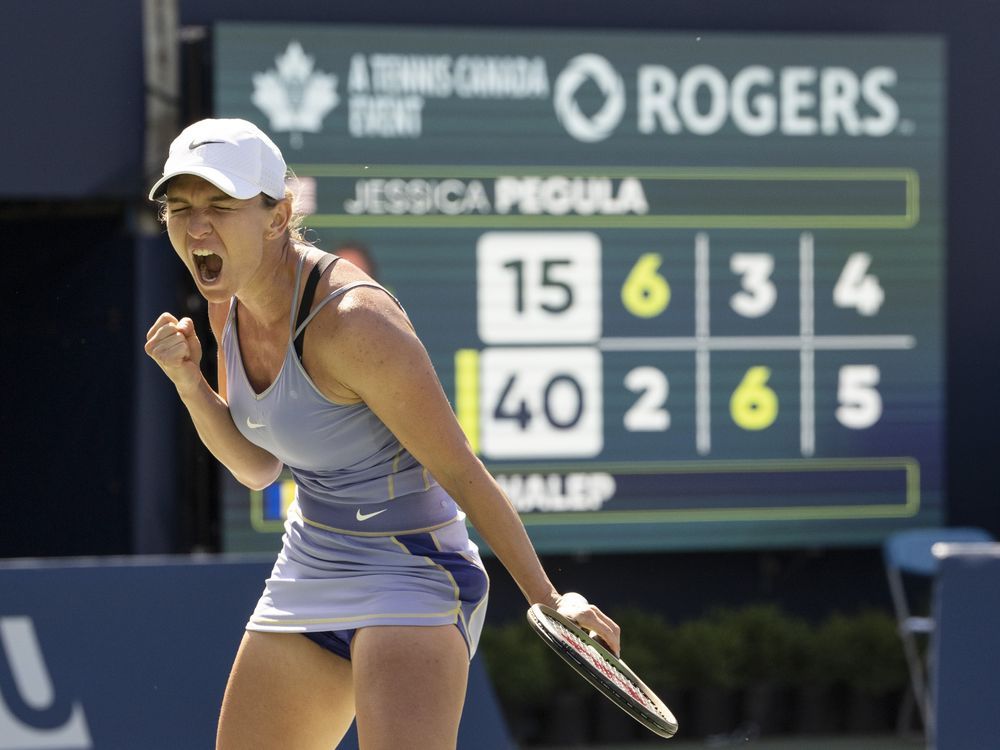 The Romanian beat Jessica Pegula of the United States 2-6, 6-3, 6-4 in the WTA event’s first semifinal on Saturday.

The 15th-seeded Halep will face the winner of the late semi between Brazil’s Beatriz Haddad Maia and Karolina Pliskova of the Czech Republic.

Pegula was the highest rated player left in the tournament as the seventh seed.

The 14th-seeded Pliskova is now the highest rated player after a series of upsets on the women’s side of Canada’s professional tennis championship.

Pegula teamed with fellow American Coco Gauff later Saturday in the semifinal of the doubles tournament against Madison Keys of the U.S. and India’s Sania Mirza.

Trailing 5-1 in the first set, Halep started to show signs of life, taking a 40-0 lead in the seventh game. But Pegula fought back, including a neatly placed volley when Halep lost her footing trying to get back to centre. Although Pegula tied the point at deuces Halep won advantage and the game.

Pegula was sharp in the next game, quickly getting to set point while holding serve and winning it with an ace.

The 30-year-old Halep briefly left the court between the first and second sets and the break seemed to help her. She quickly took a 2-0 lead in the second set although Pegula continued to challenge her.

With Halep leading 4-2, the seventh game of the set lasted more than eight minutes, with four break points before Pegula put a return long as the Romanian took a 5-2 lead. A backhand winner from Halep then clinched the second set.

Halep won break point in the first game of the decisive third set when Pegula’s forehand was long. Pegula broke right back, however, to tie the set 1-1.

Both players were visibly frustrated with their own play in the third set with several unforced errors or double faults. Halep finished the match with 10 double faults to Pegula’s one, but the American struggled with the placement of her returns.

Halep fended off four break points as they played to deuces in the set’s fourth game. Pegula put her backhand into the net to tie it 2-2, with the American angrily swinging her racket between her legs as the crowd at Sobeys Stadium chanted “Si-mo-na!”

Romanian flags dotted the stands at the tennis-specific venue on York University’s campus as Halep continued to pull away thanks to Pegula’s errors.

Charging the net, Halep smashed a forehand past Pegula for a 40-15 advantage in the set’s ninth game. Pegula responded by saving two match points to bring the score to deuces.

Pegula smashed her racket on the ground repeatedly after her shot went wide to give Pegula advantage, but the American put a shot into the net to bring it back to deuces.

Halep kept hammering the ball to Pegula’s backhand but the American fended off two match points to stay alive at 5-4.

Holding serve on match point, Halep forced Pegula to put her forehand into the net to complete the comeback and reach the tournament’s final.

This report by The Canadian Press was first published Aug. 13, 2022.