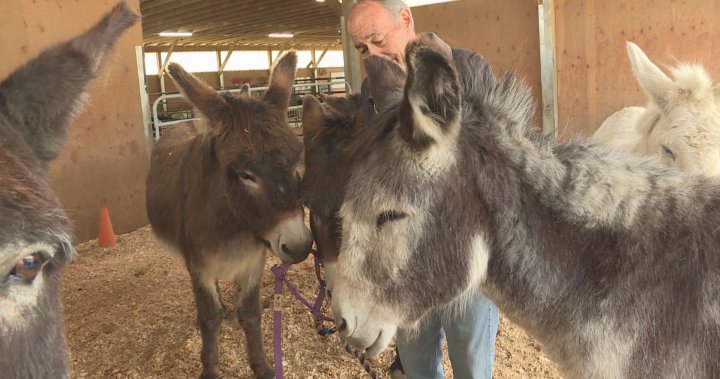 The hooved residents at the Turtle Valley Donkey Refuge Society have not been petted by the public in more than two years.

Now the Chase, B.C. Society is reopening to the public.

“We’ve got some really good programs in place this year because all of us are still thinking about COVID,” said Shirley Mainprize, Turtle Valley Donkey Refuge Society co-founder.

The refuge is open to the public on weekends, has private bookings on Tuesdays, is offering seniors programs, guided tours and more. To meet people in their comfort zone while learning about and bond with the 105 donkeys in it’s care. The founders of the rescue say donkeys are misunderstood animals.

“When you have donkeys that are in their senior years they are just like us. We hunch over in our old years and [donkeys] get swayback,” said Mainprize.

Swayback is a common term for Lordosis, which is the weakening of donkeys supporting ligaments along the spine.

“Donkeys also don’t shed out like horses. Where horses are dropping their hair like crazy, these ones hold on until June then falls out with grooming, then it’s growing again in July,” said Mainprize.

Donations from the public are crucial to continued caring for the abused, abandoned and surrendered donkeys like the standard-sized donkey Siska, who was at a kill shelter in Saskatchewan, before being taken to the refuge.

She had a wound on her forehead that wouldn’t heal, an x-ray found that she had blunt force trauma and a bone fragment was causing her distress. Once it was removed, Robert Miller, co-founder of the Turtle Valley Donkey Refuge Society says she has recovered mentally and physically from the abuse.

“The abuse she got didn’t stop her from trusting humans, which is very odd. After an impact like that you would think she wouldn’t trust them again,” said

To donate to the Turtle Valley Donkey Refuge Society and to learn more about their programs, visit their website www.turtlevalleydonkeyrefuge.com