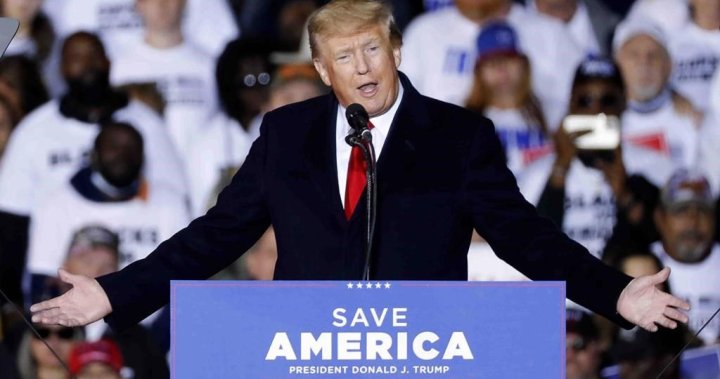 Lawmakers are working furiously to update the 135-year-old law that was put in place in the aftermath of the Civil War and came perilously close to unraveling on Jan. 6, 2021. At that time, the defeated president urged his followers to “fight like hell” over the election and pressured Vice President Mike Pence to ditch his ceremonial role presiding over the session and reject the results.

While Pence ignored the president’s demands that day, Trump continues to insist the vice president “could have overturned the election” — a deeply troubling development as the former president considers another White House run.

Trump says pardons for Jan. 6 rioters on table if re-elected

“President Trump’s comments underscored the need for us to revise the Electoral Count Act, because they demonstrated the confusion in the law and the fact that it is ambiguous,” Sen. Susan Collins, R-Maine, told reporters at the Capitol.

The outcome of the bipartisan effort in Congress remains highly fluid, and could easily collapse, especially as Republicans are wary of crossing Trump and Democrats seek broader changes after their own sweeping elections and voting legislation fell apart last month. Any update to the 19th century law would likely face the filibuster’s 60-vote threshold in the Senate, meaning the legislation would need bipartisan support in the evenly split chamber to advance.

Yet the effort to change the Electoral Count Act has been gaining political currency, especially with Trump edging toward another run. The urgency has continued to rise over the past year as the former president and his allies have led a steady drumbeat in state legislatures, working to install sympathetic leaders in local election posts and, in some cases, backing political candidates who participated in the riot at the Capitol.

1:41
Trump pushes for multiple Jan. 6 lawsuits to be thrown out

Senate Republican leader Mitch McConnell said Tuesday he’s open to the effort, as he also rejected the idea Trump floated at a weekend rally of pardoning people who have been criminally charged in the deadly riot at the Capitol.

”What we saw here on January the 6th was an effort to prevent the peaceful transfer of power from one administration to another,“ McConnell said.

The Kentucky Republican went on to say the Electoral Count Act “is flawed and it needs to be fixed.” He also said of those charged criminally in the riot, ”I would not be in favor of shortening any of the sentences for any of the people who pleaded guilty.”

A bipartisan group led by Collins, the rare and frequent Republican Trump critic, has been meeting behind closed doors and hopes to present a draft as soon as this week.

Senators are delving into potential changes to Electoral Count Act with ideas that would make it more difficult to challenge results. They are also considering ways to protect election workers, who are being harassed at alarming rates nationwide, and funding for election assistance and voting equipment. Some 16 senators, Republicans and Democrats, are working swiftly, with the blessing of party leaders, much the way they did last year to produce the $1 trillion bipartisan infrastructure bill President Joe Biden signed into law.

Sen. Tim Kaine, D-Va., told The Associated Press that after Trump used the word “overturn” in describing his effort to challenge the election, “This does create a sense of urgency to get this done.”

And while for many Democrats, including Kaine, the effort to change the Electoral Count Act is not a substitute for their own failed voting rights package, it does represent the opportunity for a potential legislative success, if not the starting point of further discussions.

“Reforming the Electoral College is a good thing to do, but it sure doesn’t replace the need to deal with voting rights, dark money and reapportionment,” said Senate Majority Leader Chuck Schumer, D-N.Y.

2:52
‘I will stand in this breach’: Biden warns Trump’s threat to democracy continues on U.S. Capitol riot anniversary

‘I will stand in this breach’: Biden warns Trump’s threat to democracy continues on U.S. Capitol riot anniversary – Jan 6, 2022

Civil rights and voting rights advocacy groups are pushing Democrats to broaden their scope and include some elements of their failed voting legislation, particularly the John R. Lewis Voting Advancement Act, which would reinstate Justice Department’s role in monitoring elections in states with repeated violations of voting laws.

The growing sense of urgency for electoral count changes boiled over this past weekend when Trump made arguably his most clear admission that he wanted Pence to overturn the election results when he presided over the joint session of Congress.

Republicans who rejected the Democrats’ broader Freedom to Vote: John R. Lewis Act as too broad see value in shoring up the more distinct Electoral Count Act system to prevent Trump or any other person who may seek to challenge it.

“I don’t agree that Vice President Pence had that authority, but if that’s an argument that some people find convincing, then I think that it’s appropriate that Congress clarify the law,” said Sen. John Cornyn, R-Texas.

The bipartisan group is not operating in a vacuum.

Democracy groups for years have warned that the Electoral Count Act, which emerged after the disputed 1876 election that resulted in the withdrawal of troops stationed in the South to uphold laws ending slavery, needs an update.

Sen. Angus King, I-Maine, has been working on changes to the Electoral Count Act since last spring, in the aftermath of the Capitol riot, assembling experts and sharing ideas with senators of both parties.

On Tuesday, King, along with Rules Committee Chairman Sen. Amy Klobuchar, D-Minn., and Sen. Dick Durbin, D-Ill., the Judiciary Committee chairman, unveiled their draft proposal and shared it with the bipartisan group headed by Collins. Their proposal includes clarifying that the vice president has “no role” in counting the votes and shifting from the vice president to a senior senator the ceremonial role of presiding over the tally.

King said he hopes the groups can merge their work. Of Trump’s comment, he said, “It underlines why we have to get this done.”