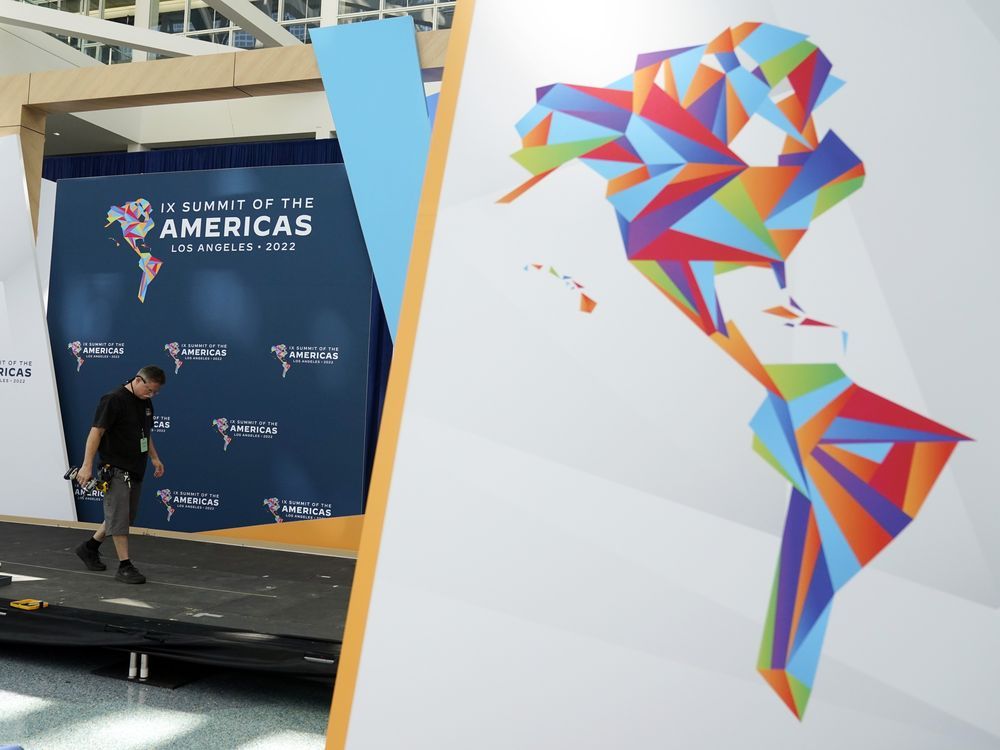 In The News is a roundup of stories from The Canadian Press designed to kickstart your day. Here is what’s on the radar of our editors for the morning of June 7 …

What we are watching in Canada …

Prime Minister Justin Trudeau isn’t saying whether he supports President Joe Biden’s decision to exclude Venezuela, Nicaragua and Cuba from this week’s Summit of the Americas.

Trudeau acknowledges that some of the countries in the Western Hemisphere are “less like-minded” than others.

But he says they all share a number of urgent issues, such as migration pressures, climate change and recovering fully from the COVID-19 pandemic.

All three are expected to be on the agenda at the weeklong summit as the prime minister departs for Los Angeles later today.

On the way, he and Defence Minister Anita Anand are stopping in Colorado Springs, Colo., for meetings with commanders and officials from Norad, the joint-command continental defence system slated for upgrade.

“It’s extremely important that we have an opportunity to engage with our fellow hemispheric partners — some like-minded, some less like-minded,” Trudeau told a news conference Monday in Ottawa with his Chilean counterpart Gabriel Boric at his side.

Shopify Inc. shareholders will vote on whether the company should adopt a new corporate governance structure that would give its chief executive a non-transferable founder share.

If passed at Shopify’s annual general meeting today, the move stands to solidify founder Tobi Lutke’s voting power for as long as he is at the Ottawa e-commerce software company.

The arrangement would see Lutke, his family and affiliates hold 40 per cent of the company’s voting power.

Shareholders will also vote on whether the company should carry out a 10-for-one split of the company’s class A and class B shares, which Shopify has positioned as a way to make voting shares more affordable to a boarder segment of the population and diversify its ownership base.

The vote comes after Shopify shares plunged in value in recent months and a month after company executives, including Lutke, tweeted that they were purchasing shares as a sign of their confidence in the business.

What we are watching in the U.S. …

WASHINGTON — A documentary filmmaker who recorded members of the far-right Proud Boys extremist group as they stormed the U.S. Capitol on Jan. 6, 2021, says he will testify during the first hearing of the House panel investigating the insurrection.

Nick Quested, a British filmmaker who also witnessed some of the group’s planning before the attack on the Capitol, confirmed he will be among the witnesses in Thursday night’s prime-time hearing. The panel has not yet announced a full list of those who will testify.

Quested was a witness to some of the most extraordinary eventsthat took place that day, accompanying members of the extremist group as they walked to the Capitol from President Donald Trump’s speech in front of the White House, as they broke through police barriers and eventually into the building, and as hundreds of Trump’s supporters moved through the Capitol to protest his defeat.

Quested was also with the man then leading the group, Henry “Enrique” Tarrio, the night before when Tarrio met in an underground Washington garage with Elmer “Stewart” Rhodes, the founder and leader of the Oath Keepers, another extremist group present at the riot.

Tarrio and other members of the group were charged on Monday with seditious conspiracy for what federal prosecutors say was a coordinated attack on the Capitol to stop Congress from certifying President Joe Biden’s 2020 electoral victory. Rhodes was indicted on similar charges earlier this year.

Quested says he was interviewed by the Justice Department as it prosecuted hundreds of cases related to the insurrection. He says he was filming the group as part of a documentary about extremism in America.

Quested is expected to describe his experiences and potentially what he witnessed behind closed doors, as the Jan. 6 panel begins a month of hearings to explain to the American public what happened that day and how it occurred. The committee has conducted more than 1,000 interviews since last summer as it has attempted to create the most comprehensive record yet of the insurrection.

Thursday’s hearing is expected to be an overview of the committee’s findings, with other hearings in the coming weeks diving into more specifics of the planning behind the attack. The panel has been especially focused not only on the extremist groups that were among the rioters but also on what Trump was doing at the White House while the violence unfolded.

What we are watching in the rest of the world …

KYIV, Ukraine — Dozens of Ukrainian fighters killed at the Azovstal steelworks have been returned to Ukraine by the Russian occupiers of the fortress-like plant in the destroyed city of Mariupol, where their last-ditch stand became a symbol of resistance against Moscow’s invasion.

The dead taken from the ruins of the bombed-out mill were transferred to the Ukrainian capital, Kyiv, where DNA testing is underway to identify the remains, according to both a military leader and a spokeswoman for the Azov Regiment.

The Azov Regiment was among the Ukrainian units that defended the steelworks for nearly three months before surrendering in May under relentless Russian attacks from the ground, sea and air.

It was unclear how many bodies might remain at the plant.

Meanwhile, Russian forces continued to fight for control of Sievierodonetsk, an eastern Ukrainian city that is key to Moscow’s goal of completing the capture of the industrial Donbas region.

President Volodymyr Zelenskyy said Ukrainian forces were holding their positions in the city amid fierce fighting in the streets as Russia tries to deploy more forces.

“But it is the 103rd day, and the Ukrainian Donbas stands. It stands firmly,” he said in his nightly address to the nation. Zelenskyy also said Moscow’s forces intend to take the southeastern city of Zaporizhzhia, home to more than 700,000 people, a move that could severely weaken Ukraine’s standing and allow the Russian military to advance closer to the center of the country.

The defenders’ fate in Russian hands is shrouded in uncertainty. Zelenskyy said more than than 2,500 fighters from the plant are being held prisoner, and Ukraine is working to win their release.

Allied engineers, many of them Canadians, won their greatest victory of the First World War at Messines, Belgium. They used underground explosives to destroy the German trench system, allowing infantry to capture a ridge overlooking the town of Ypres in about three hours.

“Tiger King” star Bhagavan “Doc” Antle has been charged with laundering more than half a million dollars, money federal prosecutors said Monday that he believed to be the proceeds of an operation to smuggle people across the Mexican border into the United States.

Charges against Antle and Andrew Jon Sawyer, one of Antle’s employees at Myrtle Beach Safari, were revealed during a federal court hearing in Florence, South Carolina.

According to federal prosecutors, Antle and Sawyer laundered $505,000 over a four-month period by doling out checks from businesses they controlled, receiving a 15% fee of the money that passed through their hands.

The checks, prosecutors allege, falsely purported to be payment for construction work at Myrtle Beach Safari but were in reality intended to serve as evidence that the recipients had legitimate income.

According to the complaint unsealed in court Monday, Antle discussed his plan to conceal the cash he received by inflating tourist numbers at his 20-hectare wildlife tropical preserve. Prosecutors also said he had previously used bulk cash receipts to purchase animals for which he could not use checks.

According to authorities, Antle and Sawyer each face a maximum of 20 years in federal prison if convicted.

Antle is featured prominently in “Tiger King: Murder, Mayhem and Madness,” a 2020 Netflix documentary miniseries that focused on tiger breeders and private zoo operators in the U.S. The series focused heavily on Oklahoma zoo operator Joe Exotic, who also was targeted for animal mistreatment and was convicted in a plot to kill a rival, Carole Baskin.

Animal rights advocates have accused Antle of mistreating lions and other wildlife. He was indicted in Virginia in 2020 on animal cruelty and wildlife trafficking charges.

Did you see this?

OTTAWA — The online streaming bill will generate at least $1 billion a year for Canada’s creative sector, including Indigenous programs, Heritage Minister Pablo Rodriguez told a committee of MPs on Monday.

Rodriguez disclosed the figure before the House of Commons heritage committee, which is studying a bill updating broadcasting laws and applying them to streaming services such as Netflix and Disney Plus.

Rodriguez said some of the money would go toward supporting productions by Indigenous and minority communities, as well as French productions from Quebec.

Rodriguez said the sum would exceed $1 billion because — since his department made its original calculation — more people have subscribed to streaming platforms, such as Netflix.

More platforms, including Disney Plus, have also come to Canada and they have become more and more popular during the COVID-19 pandemic.

He said some of the funds would support diverse programming, including in French.

“We will want to be able to hear more diverse voices. We want to hear Indigenous voices more. Maybe we can do it with a mandatory provision. Maybe we can find other ways to do so — and looking at official languages as well, and perhaps other languages,” he said.

This report by The Canadian Press was first published June 7, 2022.