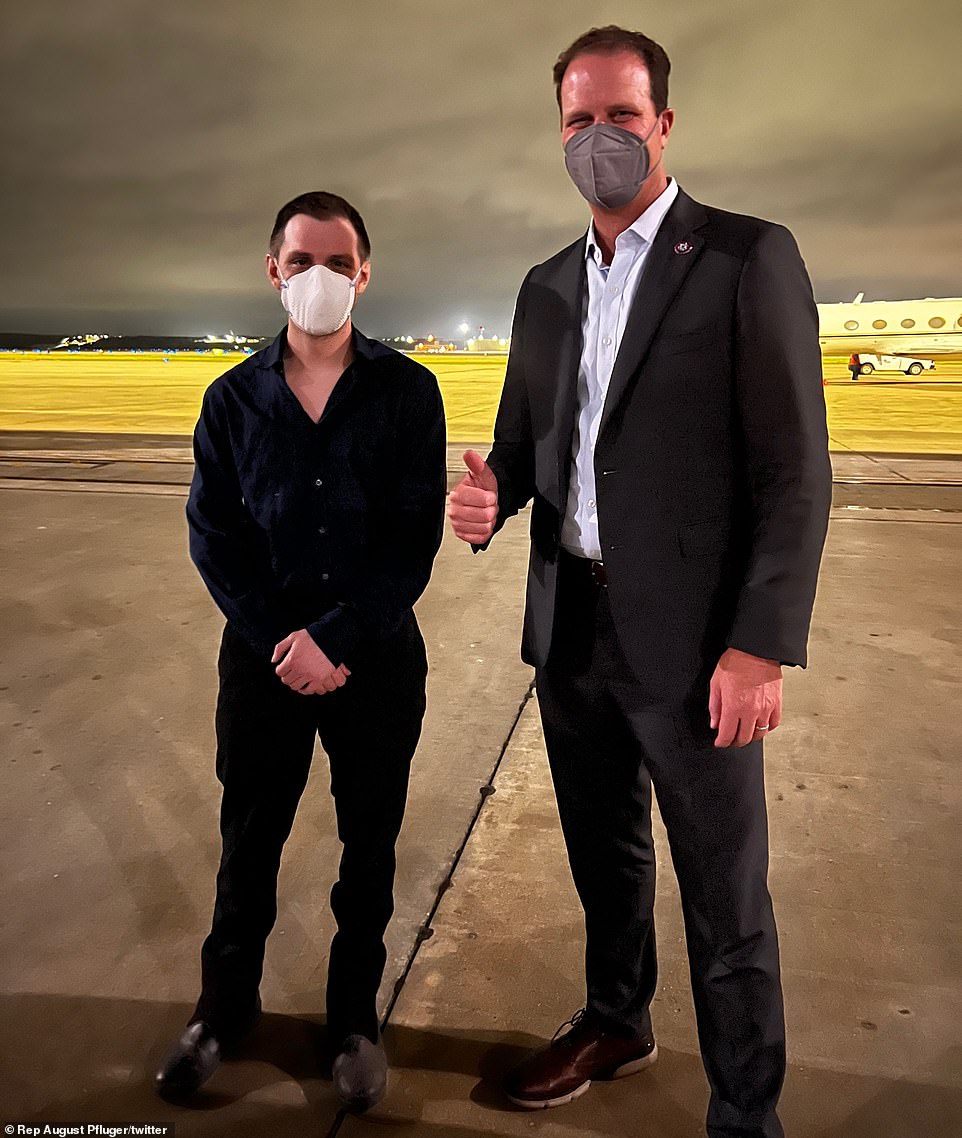 Former U.S. Marine Trevor Reed has landed back in the U.S., in Texas, after being freed in a surprise prisoner swap with Russia.

Reed was detained in Russia in 2019. He was accused of assaulting a police officer while visiting his girlfriend in the country – something he has always denied.

After he arrived back on Thursday, his mother Paula tweeted: ‘It’s been very exciting day for the Reed family. Trevor is back in the USA.’

They had been pleading with President Biden to bring their son home for years. In return for Reed’s freedom, the U.S. agreed to return Konstantin Yaroshenko, a Russian pilot serving a 20-year federal prison sentence in Connecticut for smuggling drugs.

Reed’s parents say they are grateful to President Biden for saving their son’s life.

Reed was on a hunger strike in Russian prison and his family say they believe his declining health was one of the reasons he was let out.

Scroll down for video

Trevor Reed arrives back in Texas on Thursday morning. He is shown with Rep. August Pfluger, who helped secure his release

Trevor Reed (center in navy shirt) with his mother and father, Texas Rep. August Pfluger and others this morning after arriving back in Texas

Trevor reed (left) is shown arriving back in Texas at dawn this morning. He was freed in a dramatic prisoner swap. The Marine was jailed in Russia in 2019 while visiting a girlfriend. He was accused of assaulting a police officer but has always denied it

Dramatic video footage from Wednesday showed the moment the U.S. swapped Reed for Yaroshenko, which has been likened to a famed Cold War prisoner exchange on the so-called Bridge of Spies.

The clip was shot at a Turkish airport and saw Yaroshenko disembark an American private jet, accompanied by security personnel whose faces were pixelated.

He walked toward Russian officials waiting nearby with Reed.

Financial Times reporter Max Seddon, who was one of the people who shared the clip, said: ‘Real bridge of spies Cold War vibes.’

Bridge of Spies was a 2015 movie starring Tom Hanks and Mark Rylance and tells the story of US officials’ efforts to free Francis Gary Powers, a spy plane pilot shot down over the Soviet Union in 1960.

He was successfully-exchanged for KGB spy Rudolf Abel on the Glienecke Bridge, which connects Potsdam to Berlin in Germany.

Reed, of North Texas, was arrested in the summer of 2019 after Russian authorities said he assaulted an officer while being driven to a police station following a night of heavy drinking.

He was later sentenced to nine years in prison, though his family maintained his innocence – and the U.S. government has described him as being unjustly detained.

Reed was finally released on Wednesday as part of a prisoner exchange, in which US officials agreed to return Yaroshenko, pilot serving at a Connecticut prison for conspiracy to smuggle cocaine into the U.S. after he was arrested in Liberia in 2010 and extradited to the U.S.

The tense scene was reminiscent of the Steven Speilberg 2015 thriller Bridge of Spies, which depicted the Cold War prisoner exchange of U.S. Air Force pilot Francis Gary Powers and KGB spy Rudolf Abel in Germany in 1962.

In exchange for his release, the United States released Konstantin Yaroshenko (above), a smuggler serving 20-years in prison in Connecticut

Trevor was celebrating with his girlfriend, Alina Tsybulnik, and some of her co-workers the night he was arrested. He was accused of assaulting a police officer – a claim he denies

Paula and Joey Reed are shown on Wednesday outside their home in Granbury, Texas, after receiving the news that their son would be freed

WHAT ABOUT US? JAILED AMERICANS PAUL WHELAN AND BRITTNEY GRINER ASK WHY THEY HAVEN’T BEEN FREED

Paul Whelan has been in jail in Russia since 2018

After Reed’s release was announced yesterday, jailed Americans in Russia asked why they were being left behind and not rescued too.

Paul Whelan was convicted of espionage charges in Russia in 2020 after an arrest in 2018. He too is a former Marine and he denies the charges. He has been in jail for 40 months.

He told his parents in a statement obtained by CNN: ‘Why was I left behind? While I am pleased Trevor is home with his family, I have been held on a fictitious charge of espionage for 40 months.

‘The world knows this charge was fabricated. Why hasn’t more been done to secure my release?’

Fans of Brittney Griner, the WNBA star who was jailed in February after being caught with a marijuana pen at the airport, also demanded her release.

The State Department says it is a ‘top priority’ to bring her home.

She was detained at the outbreak of the war in Ukraine.

Questions have already arisen about Trevor Reed’s health after footage taken by Russian state media of a historic prisoner exchange showed Russian forces in camouflage and neck garters escorting the 30-year-old out of a dark-colored van Wednesday morning.

They then led Reed by his arms to a private plane nearby as he held a large, dark duffel bag.

In the video, Reed appeared to be much thinner in the video than he was in photos taken before his arrest, with family members reporting that he recently underwent a hunger strike to protest being put in solitary confinement.

Finally, on Wednesday, the president announced that Reed was free from Russian detention – something he vowed to do for other Americans being held in Russian captivity.

‘Today, we welcome home Trevor Reed, and celebrate his return to the family that missed him dearly,’ the president announced.

‘Trevor, a former U.S. Marine, is free from Russian detention.

‘I heard in the voices of Trevor’s parents how much they’ve worried about his health and missed his presence.

‘And I was delighted to be able to share with them the good news about Trevor’s freedom.

‘I’m grateful for the tireless and dedicated work of Special Presidential Envoy for Hostage Affairs Roger Carstens, U.S. Ambassador to the Russian Federation John Sullivan, and many others across our government to ensure that Trevor came home safely.

‘The negotiations that allowed us to bring Trevor home required difficult decisions that I do not take lightly.

‘His safe return is a testament to the priority my Administration places on bringing home Americans held hostage and wrongfully detained abroad.

‘We won’t stop until Paul Whelan and others join Trevor in the loving arms of family and friends,’ the president said, referring to a Canadian-born American resident who was arrested in Russia in 2018 and was accused of spying.

Secretary of State Antony Blinken also tweeted on Wednesday morning: ‘I am pleased that after years of wrongful detention by the Russian government, Trevor Reed has finally been freed and reunited with his family.

‘We thank our partners for their cooperation and help to free Trevor.’

As Reed was freed on Wednesday, State Department spokesman Ned Price said the cases of Brittney Griner and Paul Whelan remain a priority for the government.

‘The case of Paul Whelan is one we continue to work day in, day out.

‘Paul Whelan is wrongfully detained in Russia. When it comes to Brittney Griner, we are working very closely with her team.

‘Her case is a top priority for us.  We’re in regular contact with her team.’