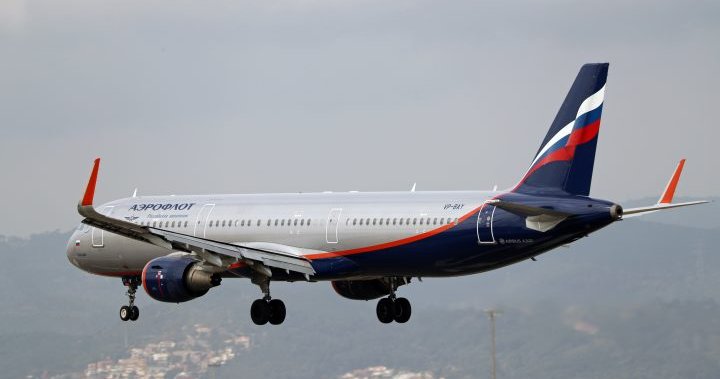 Transport Canada is looking into how a Russian airline broke a ban on that country’s planes in Canadian airspace after a pilot declared a “humanitarian flight.”

In a Twitter post Sunday night, the department said Aeroflot Flight 111 violated the prohibition that was imposed earlier in the day in response to Russia’s invasion of Ukraine.

According to flight-tracking website FlightRadar24, the flight by Russia’s flagship carrier took off for Moscow from Miami International Airport shortly after 3 p.m. ET on Sunday, about six hours after Transport Minister Omar Alghabra announced the airspace ban.

The European Union also implemented a ban on Russian commercial aircraft and private planes Sunday, a move that added to sanctions against major Russian banks and members of the country’s monied elite.

Until Sunday, Aeroflot operated multiple flights per day through Canadian airspace en route to the U.S. and beyond, but had no routes that landed in Canada.

Effective immediately, Canada’s airspace is closed to all Russian aircraft operators. We will hold Russia accountable for its unprovoked attacks against Ukraine.

Transport Canada said it will launch a review of the conduct of both Aeroflot and Nav Canada, the non-profit body that runs the country’s civil air navigation service.

“We will not hesitate to take appropriate enforcement action and other measures to prevent future violations,” the department stated.

As the plane approached Canadian skies, Nav Canada informed the flight it was not to enter the airspace due to the newly issued “notice to airmen” — also known as a NOTAM — that banned “all aircraft owned, chartered or operated … by a person connected with Russia.”

“The pilot indicated he was aware of the NOTAM but declared the flight a humanitarian flight and would enter Canadian airspace,” Nav Canada said in a statement Monday.

The organization said it accepted the declaration at face value, in line with civil aviation protocols.