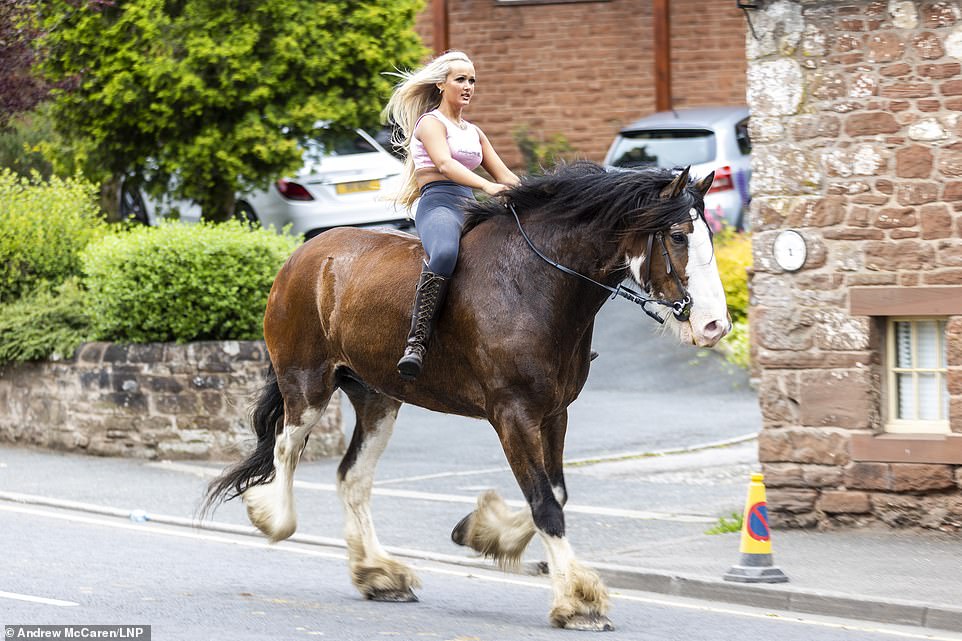 Thousands of travellers from across Europe have begun to arrive in Cumbria as the Appleby Horse Fair gets underway, with locals closing a school and shutting pubs as the festival starts.

A total of 30,000 visitors are expected to congregate in the small town of Appleby-in-Westmorland and neighbouring Kirkby Stephen for the annual four-day event.

Around 10,000 of these will be members of the gypsy, Roma and traveller community, with the 250-year-old fair billed as the largest traditional gathering of the community in Europe.

Travellers have already begun to arrive in the town, with many bringing horses, ponies and carriages with them to ‘the New Fair’.

Organisers for the fair have said at least 11 pubs in Appleby and Kirkby Stephen have confirmed they will not open while the event takes place.

In the run up to the fair, Cumbria Police is urging motorists to drive cautiously in the area and told the public to report any concerns they might have.

The force said it has made arrests for theft and drug driving and been called to the scene of a crash where a horse died and three people were injured before the fair started.

A woman rides her horse through the streets of Appleby-in-Westmorland today, as the first day of the Appleby Horse Fair gets underway

Travellers arriving in Appleby this morning with horses pulling along their carriage. The event is expected to attract 10,000 members of the travelling community

A man attends to his horse and carriage at the side of the road in Appleby this morning. The fair is the largest gathering of its type in Europe

People arriving for the Appleby Horse Fair set up camp on fields in the Appleby area. They are expected to stay for at least the next four days

Appleby Horse Fair: Historic event tracing its roots back to 1685

The fair is held outside the town of Appleby, at the point where the old Roman Road crosses Long Marton Road, on Gallows Hill, which was named after the public hangings that were once carried out there.

It was once thought the fair originated from a royal charter to the borough of Appleby from King James II of England in 1685, although more recent research has found the charter was cancelled before it was ever enacted.

The gathering is sometimes known as ‘the New Fair’ because Appleby’s medieval borough fair, held at Whitsuntide, ceased in 1885.

The ‘New Fair’ began in 1775 for sheep and cattle drovers and horse dealers to sell their stock.

By the 1900s it had evolved into a major Gypsy/Traveller event which brought families from across the UK and Europe.

The Appleby Horse Fair takes place every year at the beginning of June, with year’s edition being held a week later than planned after organisers delayed it to make way for the Queen’s Platinum Jubilee celebrations.

It comes after the Covid pandemic impacted on the previous two years, with the fair being cancelled in 2020 and postponed in 2021.

Les Clark, Chair of the Appleby Horse Fair Multi-Agency Strategic Coordinating Group (MASCG) said: ‘All the agencies involved in responding to the fair were keen to reach a compromise that enabled both the settled communities of Appleby and the surrounding areas and the Gypsy and Traveller communities to arrange and enjoy both celebrations.

‘We’re grateful to the Gypsy and Traveller representatives in the Multi-Agency Strategic Coordinating Group for being flexible on moving the date of next year’s fair to accommodate the celebrations of the Queen’s Jubilee.

‘As part of this mutually agreed compromise, a delegation of representatives from the Gypsy and Traveller Community will gather in the Fair field on Wednesday 8 June, to reinforce the traditional dates of the Fair.

‘The MASCG will also engage with those communities that normally accommodate people travelling to the fair in the days before to ensure that the impact on their Jubilee celebrations is minimalised as well as reinforcing a strong, ‘Do not come early’ message to those wishing to attend the Fair.’

Billy Welch, a member of the Multi Agency Co-ordinating Group, and representative for gypsy and travellers, said: ‘In the spirit of compromise and mutual respect that led to the cancellation of the Fair in 2020 and its postponement in 2021, due to the COVID-19 pandemic, I’m pleased that we have been able to reach agreement on the dates for next year’s fair.

‘This decision will enable the settled communities in and around Appleby to mark the Queen’s Jubilee, while preserving the Fair’s historic association with the town at a time that’s as close to the traditional dates, as is possible.’

Shane Curtin takes his horse for a dip in the River Eden on Wednesday, June 8, the day before the Appleby Horse Fair gets underway

Early arrivals for the  annual Appleby Horse Fair take their horses for a dip in the river Eden in the town on Wednesday, June 8