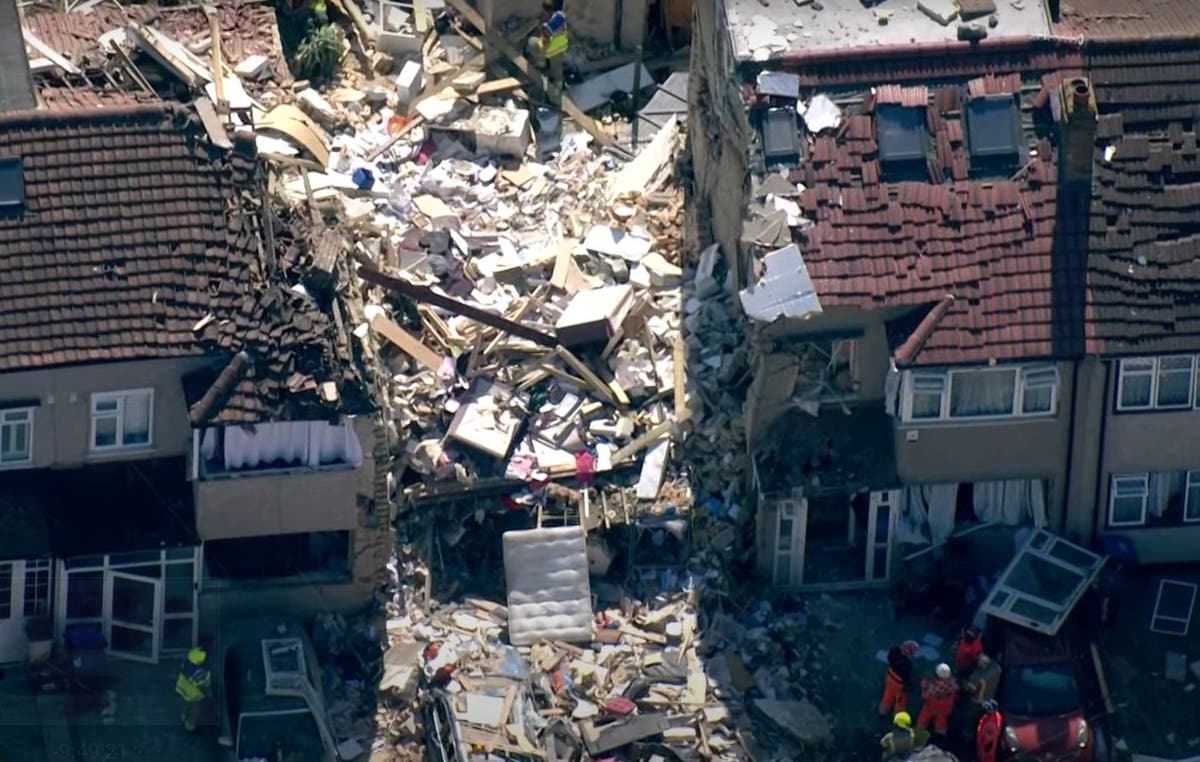 child has died after a house collapsed in an explosion in Thornton Heath.

The child was pronounced dead at the scene, the London Ambulance Service said in an update, while three people were taken to hospital after an explosion in a property on Galpin’s Road on Monday morning.

The London Fire Brigade said a terraced house had collapsed and neighbouring properties had been damaged.

In a statement, paramedics said: “We treated four people. One was discharged and three others were taken to hospital. Sadly, a child was also pronounced dead at the scene.

“All LAS crews have now been stood down.”

Speaking at the scene, the Brigade’s Deputy Assistant Commissioner Richard Welch said: “Firefighters carried out a substantial search of the property and sadly the child was pronounced dead at the scene.

“Our thoughts are with their family, friends and the local community at this time. The welfare of all involved in this incident is very important to us, and our staff will be offered counselling as a matter of priority.”

Mr Welch said there were no further searches being carried out for anyone else, and that the incident would now become a police investigation, with the cause still unknown.

40 properties have been evacuated, Mr Welch added, because of the “substantial” blast area, and crews would remain on scene throughout the night for public safety.

Residents at the scene had previously voiced concerns about a missing child.

Dozens of residents gathered beside a police cordon on the end of the street hours later said they believed a woman and four children had lived in the collapsed house.

Many also said they reported a strong gas smell in the area which had persisted for around two weeks.

Residents said gas engineers had been working on the street but had not been seen for a few days.

Galpin’s Road residents Delroy Simms, 62, and Kutoya Kukanda, 50, were branded “heroes” after they rescued three children from the house moments after the blast.

Mr Simms, dressed in his pyjamas by the cordon, said: “I was getting ready to go to work when I heard the explosion.

“I already knew what it was because that gas was smelling all week, really strong. It was giving me a headache yesterday.

“My neighbour has been calling them (gas engineers) all week.”

“When I heard the explosion it was like an earthquake. It shook me up, and my house. The shutters on our windows blew off their hinges.

“I went to the window and saw the devastation.”

Mr Simms said that Mr Kukanda passed children out to him as bricks were still falling from the structure.

Mr Kukanda, who had a bruise on his shin from a falling brick, told PA: “I heard boom, then I opened the door.

“I saw smoke, the house had collapsed, and people were screaming inside. I went inside and took the first baby – there were three children.

“I took one of the children, gave it to him (Mr Simms). The mother was screaming and saying: ‘One of my daughters is still inside’. Everything was falling.”

Firefighters were called at 7.08am, with crews from Norbury, Mitcham, West Norwood, Woodside and surrounding fire stations at the scene.

The Brigade’s 999 Control Officers have taken 14 calls to the incident, it said. The cause of the fire and explosion is currently unknown.

Police were also called to the explosion.

One resident said on social media: “I heard it whilst getting ready for work and thought it sounded like an explosion but was hoping I was wrong and that it was at a building site or something.”

Another added: “That was one loud bang thought a bomb had gone off”.

A Merton Council spokesperson said earlier Monday: “Emergency services are on site following a gas explosion at a residential property, at least one property has been destroyed. We are urging people to avoid the area.

“Firefighters are currently carrying out systematic searches and working to make the scene safe.”

An evacuation centre has been established at the nearby New Horizons community centre.