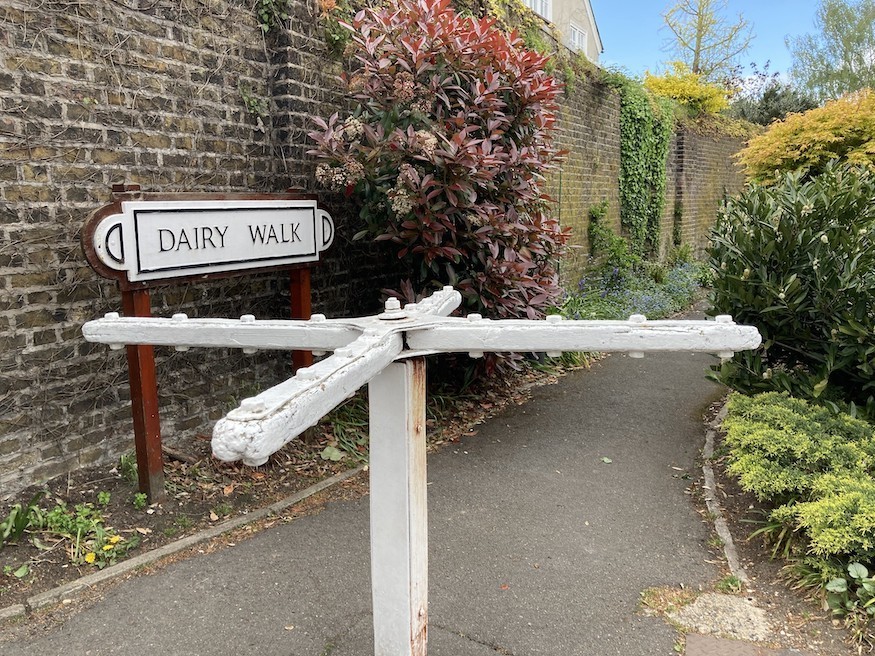 This Beautiful Alley Comes With Its Own Turnstile

What might just be London’s daintiest passage can be found at the tennis-ing end of Wimbledon.

Dairy Walk is an attractive cutting connecting Church Road and Marryat Road. Devoid of litter, graffiti or the waft of urine, this is a uniquely well-kept alley. Much of its gently sloping length is lined with flowers and shrubs — tokens of guerrilla gardeners —and it even contains a shrine to St Francis.

The most peculiar feature of this charmed snickelway is, however, the turnstile that guards its southern end. It’s a simple affair — a white horizontal cross stands upon an upright. But it’s not the kind of thing one sees in London anymore.

It works, too. The cross still turns — though you can easily squeeze past if you’re on foot without a buggy or wheelchair.

At one time, turnstiles were common sights around London. Those who know the Holborn area may have wandered down the alleys known as Little Turnstile, New Turnstile and Great Turnstile. Each once accommodated a similar rotary post. The idea was to keep large livestock out, in an era when animals were still driven along the streets.

Dairy Walk in Wimbledon was once a rural track; milkmaids would use it to carry fresh milk up to the posh houses on the hill (including the Old Rectory — an early Tudor building that’s hidden from public view). The turnstile would have dissuaded their animals from following (while presumably still permitting Wombles to come and go).

It might no longer serve its original purpose, but the turnstile enjoys plenty of attention in its retirement, attracting passers-by (and their cameras) with its unique olde-worlde charm.

If you’re in the area, be sure to check out the church yard of nearby St Mary’s, which contains the tomb of sewer king Joseph Bazelgette. And not far away, Sunnyside Passage has another alleyway oddity in the shape of this old electricity transformer (photo above).

Check out our map of hundreds of London oddities.