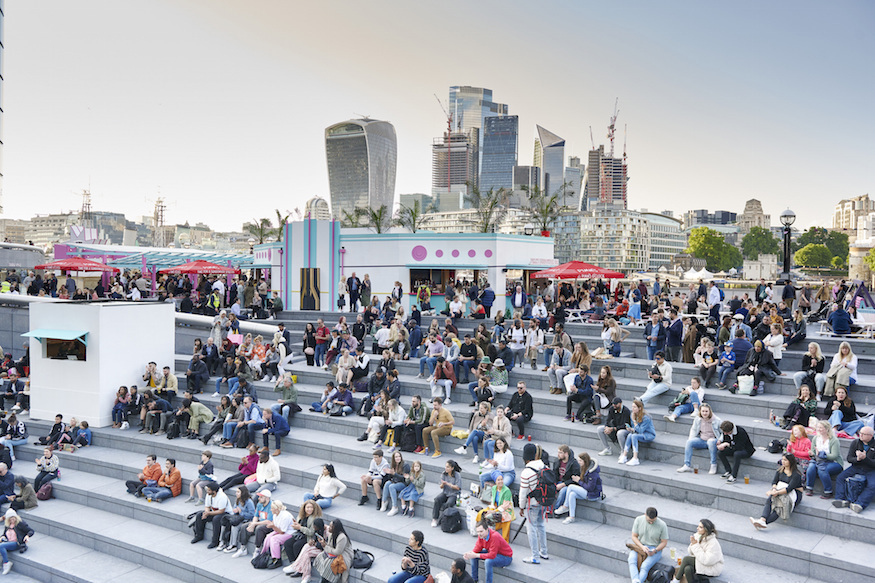 ROYAL ACADEMY SUMMER EXHIBITION: A highlight of the London art calendar, the Royal Academy Summer Exhibition brings together established and emerging artists to display their work — and this is its final weekend. Prints, painting, film, photography, architectural works and sculpture all feature, and the theme this year is ‘Climate’, with Grayson Perry among those taking part. Until 21 August

THIS BRIGHT LAND: Been past Somerset House recently? A large ferris wheel has taken over the external courtyard for This Bright Land, a month-long summer festival with various events going on throughout. As well as riding that wheel, look out for family-friendly film screenings, a global food market, beauty and wellness pop-ups and other activities. Until 29 August

GREEN CITY: Another outing for City of London Corporation’s free roaming exhibition Green City. This time, it can be seen on Hampstead Heath, displaying images of London’s heaths, parks, commons and gardens from the London Metropolitan Archives collection. FREE, 15-31 August

HITHER GREEN CINEMA: Manor House Gardens in Hither Green is this weekend’s Pop Up Screens location. Kick back in the open-air and watch The Greatest Showman on Saturday, or Ghostbuster Afterlife on Sunday. 19-21 August

ALL POINTS EAST: Disclosure, Gorillaz, Tame Impala, The Chemical Brothers, Charli XCX, Kraftwerk 3D, Nick Cave and the Bad Seeds… just some of the impressive line-up at this year’s All Points East Festival in Victoria Park, which also incorporates Field Day. Plus from Sunday-Wednesday (21-23), In The Neighbourhood is a free programme of summer events and activities open to all. 19-28 August

SUMMER BY THE RIVER: You’ve only got a couple more weeks to catch this year’s Summer by the River, the open-air festival near Tower Bridge. Head there this weekend for entertainment including a Cuban dance party, a live Samba band, and community choir performances. FREE, until 2 September

SUMMER LIGHTS: Last chance to head to Canary Wharf for the daylight version of a lights festival. Summer Lights consists of sculptures and artworks and installations designed to look their best in sunlight. It’s free, and there’s plenty else going on in the area, including a mini golf course. FREE, until 20 August

SKATE SCHOOL: Head to House of Vans in Waterloo for a Skate School session for kids aged 5+. Skilled instructors are on hand to show them how it’s done, with all equipment provided. Parents are welcome to watch from the cafe. FREE, 10am-1pm

CLASSICAL FOR KIDS: Introduce 4-11 year olds to the joy of classical music at the Royal Albert Hall’s Classical for Kids session. The music is performed in a relaxed setting, so kids are free to wriggle, move around and make noise, as tunes by the likes of Bruch and Mozart are played. 11am/1.30pm

ENCANTO: The excellent Prince Charles Cinema in Leicester Square has a sing-along screening of 2021 Disney animated film Encanto. It’s the story of the Madrigal family, living in the mountains of Colombia, with lyrics shown on screen for everyone to join in. All together now… we don’t talk about Bruno-no-no-no… 12pm

POPLAR PICNIC: Head down to Poplar Union for the Poplar Picnic, a free, family-friendly festival in Bartlett Park, alongside the arts centre. Expect live music, stalls, wellbeing activities, food and drink — take along a picnic rug and soak in the atmosphere. FREE, 12pm-4pm

THAMESMEAD FESTIVAL: Southmere Park hosts Thamesmead Festival, a celebration of the local area. Highlights this year include Fields of EveryWhen: a hot air balloon ‘tapestried’ with stories from the area, which will hover above the festival site, and act as a floating gallery — plus performances from Thamesmead-based street dance group Dynamix, local singer Samm Henshaw and Britain’s Got Talent champions Twist and Pulse. FREE, 12pm-7pm

KIDS’ COMEDY: Take the whole family along to Hawley Wharf in Camden Market for Comedy Club 4 Kids — it’s just like normal comedy show stand-ups, sketch acts and cabaret stars, but the jokes are tailored for those age 6+ and their families. 12.30pm-1.30pm

ELEPHANT TOURS: See the history and story of the Elephant & Castle area portrayed by actors on a free animated walking tour of SE17 and surrounds. Local characters and stories are brought to life through music, performers and a dance workshop. FREE, 1pm-3pm

BUTTERFLY BALL: Part of This Bright Land (see above), Somerset House hosts Vogue Rites for The Butterfly Ball, a night honouring transformation and joy within the Voguing community. See members of the community walk the runway, competing in categories across fashion, beauty, realness and performance. 6pm-10.30pm

LORD OF THE RINGS: Strap in for an epic trip to Middle-earth, as Leicester Square’s Prince Charles Cinema screens the full Lord of the Rings trilogy (extended editions) back-to-back. The Fellowship of the Ring, The Two Towers and The Return of the King are shown in sequence, with a 10-minute break between. 10am-10.43pm

BABY BROADWAY: A cast of West End actors performs Baby Broadway, a show of songs from the musicals (think Mary Poppins, Mamma Mia!, Grease, Disney…) suitable for all ages. It’s a relaxed performance, so little ones are free to move around, and join in with singing, dancing and clapping. Takes place at Hawley Wharf in Camden Market. 12pm-12.45pm

CREATE AND PLAY: As part of the Young V&A Museum (previously known as the Museum of Childhood) Reinvent Festival, there’s a Create & Play session at All Points East festival in Victoria Park. Take 3-11 year olds along today or tomorrow to make the most of an outdoor play pop-up, with large-scale play kits to creatE a huge tower, a boat to sail away on, or a den to hide in. No festival ticket necessary. FREE, 12pm-4pm (repeated on Monday)

JERK COOKOUT: Forest Hill’s Horniman Museum Gardens hosts The Original Jerk Cookout, a celebration of the 60th anniversary of Jamaican independence. Live music is spread across the stage and the bandstand, with a Cookout Village serving up dishes from all over the world. Kids are kept occupied with storytelling, bubbles, bouncy castles and other activities. 12pm-7pm

PAINTING & PROSECCO: Try your hand at creating your own version of artist Annie Dalton’s Art Deco Summer Seascape. At this Painting & Prosecco event, all art supplies are supplied, as is a glass of prosecco to get you started, and a practicing artist is on hand to offer advice and guidance. Takes place at London Art Bar in Holborn. 3pm-5.30pm