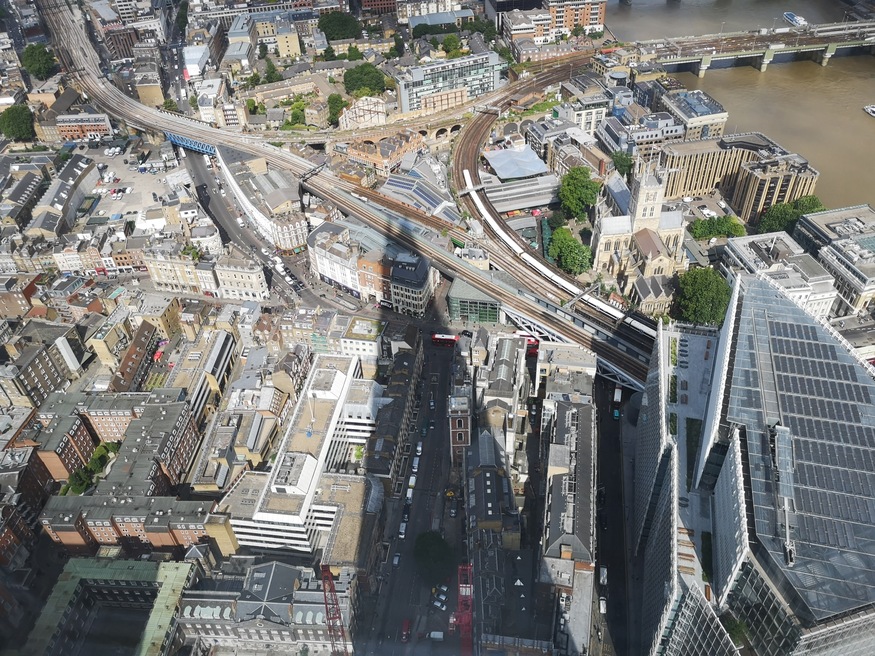 They say the greatest trick the Devil ever pulled was convincing the world he didn’t exist. If that’s true, the second greatest was convincing it London’s highest structure is The Shard.

It has long been accepted that The Shard, the polyhedron beloved by all as London’s tallest, is not the highest point in the country. Emley Moor transmitting station — 322 metres base to tip since its height was reduced in 2021 — is the tallest free-standing structure in the United Kingdom, and Ben Nevis – 1,345 metres – the highest point above sea level.

But we have been conditioned never to question the ever-present assumption that, surely, The Shard is still the highest point in London.

Cui bono? Who benefits? That is the question each journalist is supposed to ask about the way things are. Yet an omertá surrounds The Shard: for some reason, no mainstream publication has ever contradicted the sleek, pyramid-shaped official line.

The world’s most popular source for general trivia, Wikipedia, puts that official line as follows:

“[London’s] highest point of land, the 245 metre Westerham Heights, was higher than any man-made structure in London until 2012, when the 309 metre tall Shard London Bridge was completed.”

That is a lie.

The 309 metre figure alone is misleading: most sources put the building’s tallness – that is, its length base-to-tip – at about 306 metres. The last three metres come from the height of the ground on which The Shard is built. So while its height is indeed 309 metres above sea level, The Shard is only 306 metres tall.

It is in this respect that the wool has been well and truly bolted over our collective eyes.

The real highest point in London is also man-made. But it was constructed long before The Shard was.

Just across the road from The Shard’s home borough of Southwark stands the true highest structure in London: the Crystal Palace transmitter.

I once lived in the shadow of the transmitter, and it was in that home that I began to see what was in front of our eyes all along.

“I am up a big hill,” I came to realise. “And so is this tall tall transmitting tower.”

Preliminary checks put the mast’s height at 222 metres and the plot it stands on at about 109 metres – 331 metres total.

But as a professional journalist with a background in fact-checking it was incumbent on me to verify these figures, so I reached out to the UK’s telecoms regulator, Ofcom, for authoritative information.

Ofcom, understandably cagey about breaking the silence, redirected me to Arqiva, the company which runs much of the UK’s broadcast infrastructure. While Arqiva was “unable to confirm the height above sea level” of the Crystal Palace mast, they provided the first key to unlocking the puzzle: their official factsheet for the structure put the transmitter at 219 metres base-to-tip.

Next I turned to the Ordnance Survey, the agency set up to help bomb Scotland which is now also in charge of our maps. The OS told me they didn’t keep information on non-habitable structures’ heights – but they had everything else I needed.

“An internet search reveals the Crystal Palace transmitter at 219 metres or 222 metres (depending on which site you look at)”, wrote Matt from the Ordnance Survey, who was not yet privy to the official stats from Arqiva.

“We have the absolute height above sea level for the top of the what [sic] we have captured as The Shard building as 308.9m.”

There it was, straight from the closest thing a geographer has to a god: The Shard is not the highest thing in London.

But this bred only more questions. Why was such a simple fact not available anywhere? How many pub quizzes have crowned illegitimate winners on the basis of this lie? And once again — cui bono?

Going straight to the top for an answer

One thing you must admit, upon stepping off the elevator at The View from The Shard, is it is quite high up.

Though I deny it the mantle of London’s highest point, one must accept The Shard has the highest public viewing deck. From up there the city’s glory, splayed out as though it were the miniature village at Legoland, is unrestrained.

But I did not visit The Shard in person to ogle our fair city or to snap selfies in the viewing deck’s fake red phone box. I visited for the truth.

A prominent legal notice, a relic of anarchist Ian Bone’s campaign against Shard ownership some years before, is displayed on a door to The Shard’s top viewing deck. It warns:

“AN ORDER WAS MADE IN THE HIGH COURT OF JUSTICE PROHIBITING ANYONE FROM ENTERING IN OR REMAINING AT THE SHARD OR SHARD PLACE WITHOUT PERMISSION.

ANYONE IN BREACH OF THIS INJUNCTION WILL BE IN CONTEMPT OF COURT AND MAY BE IMPRISONED, FINED OR HAVE THEIR ASSETS SEIZED.”

This set me on alert, but it needn’t have. The staff paid me little attention despite my being up a tall building exhibiting unusual behaviour on what was, unquestionably, 9/11.

Unfolding the complimentary map to the skyline given to visitors, I was immediately met with conspiracy: among the notable sites highlighted, the Crystal Palace transmitter was not only ignored but missing. It had been chopped out of the map altogether.

The sky-piercing Eiffel Tower lookalike to London’s south goes unacknowledged by The Shard estate. Webcams on The Shard’s website offer three views: North, West and East. A tour guide explaining the view to visitors skipped over the south, glossing over such treasures as Greenwich, the Horniman Museum and the brutalist masterpiece Aylesbury Estate.

The people hear the truth

Explaining I was a journalist, I introduced myself to fellow spectators on the viewing deck — each of whom had paid at least £32 for the privilege to be there.

I spoke first to an uncle visiting from New York, identifying himself as George.

Was this his first time at The Shard?

How was he enjoying it so far?

How would George feel if I told him The Shard was not actually the highest place in London?

“That’s possible,” George said, “Not [open] for the general public, though.”

A fair rejoinder. But it wouldn’t affect his visit at all? He was okay with that?

For all his efforts, George’s words could not mask the wounded look in his eyes.

I next spoke with a couple visiting from The Netherlands.

What were their thoughts on The Shard?

“What if I told you there is a taller — well, a higher-up place, and it’s that big old tower over there, the Crystal Palace transmitter?”

“Hadn’t seen it before,” the girlfriend responded.

Did it change their feelings about The Shard?

“No. That’s way farther out of the centre. We’re not really out for the tallest building, we’re just out for a good view.”

Both parties I had spoken with so far were tourists from abroad. Would the sense of betrayal be greater for a Londoner?

John, who is from Yorkshire but now lives in Wandsworth, was up The Shard on 9/11 to show Simon, his visiting father, the view.

Dad Simon was thrilled with his experience: “Fantastic, yeah, absolutely brilliant. Just — hard to express when you first walk out and do the circle and just get a complete, circular view of everything.”

I tore off the plaster. “See over there, the Crystal Palace transmitter, the high mast-y thing over there? How would you feel if I told you that was taller than this – well, not taller, that it was higher up. It’s like 20 metres higher up, the top of it.”

“Okay, I didn’t know that,” the elder Yorkshireman said.

“How do you feel about that?”

“A little bit shocked, because I thought — I was saying to you [Simon, the patriarch] the whole time, ‘This is the biggest in the UK, there’s nothing bigger.’ And then you said that, and I’m like… Okay.”

At a feedback terminal on the way out of The Shard, I took the opportunity to let building ownership know I was onto them.

Ignore its thrusting isosceles shape. The Shard should be seen as a giant cash cow.

The building says its viewing deck pulled in more than two million visitors in 2016, netting revenue presumably in the neighbourhood of £60 million. Its mysterious luxury flats are said to cost £50 million a pop. If Knight Frank is to be believed, office rents midway up the building start at £85 a square foot. There are 26 rentable floors, most of which have above 10,000 square feet available: conservatively, at full occupancy the building should pull in more than £20 million a month in office rents.

Building ownership is registered in the Channel Islands, so it’s difficult to know specifics. But one has to ask: how would these prices tumble if The Shard were to lose its august reputation as London’s highest thing? Enough, I think, that it would be in the interest of Big Shard to prevent contradictory information getting out.

Besides Londonist, I pitched this story to three major outlets. None responded — attesting perhaps to just how dangerous this story was. So often, it falls to small independent media to tell the stories the establishment can’t touch.

Having found a home for the story, the final step was to seek comment from involved parties.

I heard nothing back from the Mayor of London’s office, from Boris Johnson — the mayor who oversaw the tower’s opening — or from Antonio Gutierrez, the Secretary-General of the United Nations.

Unsurprisingly, there was no response either from the most directly interested groups. Sellars, the property developers who own 5% of The Shard, did not return my emails. Neither did the government of the State of Qatar, which owns the other 95%.

But I did get one reaction.

An email to the 10 Downing Street press office, asking whether the Prime Minister had any knowledge of the profitable lie looming over London’s core, returned a phone call within minutes.

“It’s probably not for us,” said a government spokesperson, referring my enquiries back to the silent Mayor’s office.

Perhaps that was fair: perhaps it’s absurd to think such a thing as covering up the true height ranking of The Shard goes as high as the Prime Minister’s office. But I can’t help but think the response came with suspicious speed, considering it was just two days after the Queen had died.

Bron Maher is a media reporter for Press Gazette.