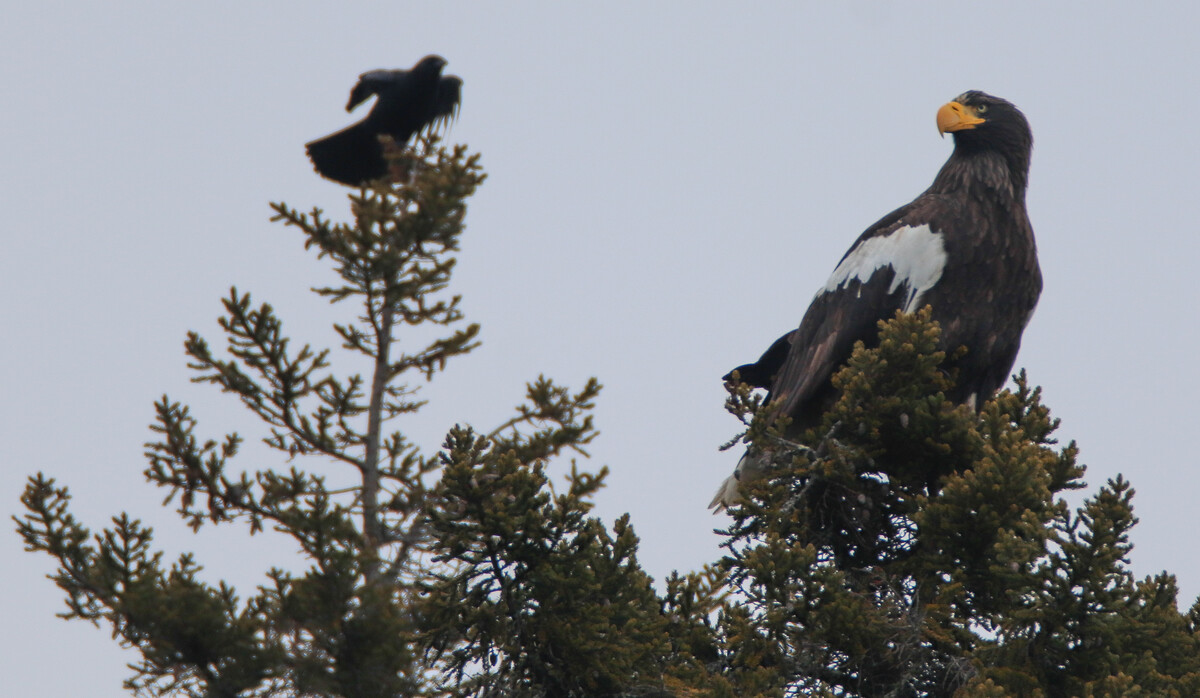 The BDN Editorial Board operates independently from the newsroom, and does not set policies or contribute to reporting or editing aticles elsewhere in the newspaper or on bangordailynews.com.

A massive example swooped into Maine at the end of 2021 in the form of a Steller’s sea eagle. One of only a few thousand in the entire world, thousands of miles from its usual habitat in eastern Russia, this impressive bird of prey sports an 8-foot wingspan and “honking” yellow bill. It has the rare avian ability to make a bald eagle look small. And it received a big reception when it popped up along the Maine coast.

Birders from around Maine and the Northeast flocked to the Georgetown area to see the sea eagle. It made for a wonderful, if unusual celebration to close out 2021 and start the new year.

“I don’t even know what to compare it to. We often say these [rarities] shouldn’t be here. This bird should not even be on this continent,” Maine Audubon naturalist Hitchcox told the Portland Press Herald. “But because there are only about 4,000 in the world, you could travel the world birding and never see one. And it’s an hour from my home.”

One of those people, Matthew Gilbert of Cumberland, was the first birder to spot the eagle in Georgetown on the morning of Dec. 31.

“I saw eagles in a tree and looked through my scope and saw bald eagle, bald eagle, and then the big white patches on the wings of the next bird, and that big, honking, yellow bill – it was unmistakable,” Gilbert told the Press Herald. “I said, ‘Guys, guys, guys, I got it, I got it.’ It was super exciting.”

Hundreds of people converging on a small town’s working waterfront to see a single bird wasn’t likely to be a recipe for order and niceties. As visitor Erika Zambello wrote for BirdWatching, the atmosphere that took flight in Georgetown was not a given.

“Now, during a rare sighting, birders can be, well, unpleasant. I have read stories of jostling for prime viewing placement, stepping in front of scopes, and harsh words,” Zambello wrote. “But not today, not in the face of this incredible species. People who had already seen the bird helpfully pointed out its relative location to the new arrivals.”

Hitchcox and Maine Audubon encouraged people to be respectful of private property and to remember that fishermen were working in the area. An update noted they had heard “that there was increased frustration from lobstermen on Saturday” and implored birders “to do better to keep this a friendly place for visitors.”

Even with frustrations, it seems that a spirit of respect and sharing won out in Georgetown.

“Five Islands is a working waterfront, and yesterday was a busy day for local lobstermen pulling their traps for the season,” bird and nature writer Nick Lund said on Twitter on New Year’s Day. They weren’t expecting hundreds of birders crowding the wharf, and it could have been an ugly scene. Instead, the mood was bemused, pleasant, and happy.”

“Today a lobsterman is taking passengers out for rides to see the bird — the only way to get a look as its [sic] been perched on the backside of an island for several hours,” Lund added. “So cool.”

It says a lot about Maine lobstermen that they would not only tolerate a hectic wharf full of birders — after a hectic year, while they’re already dealing with a host of other challenges — but also embrace the moment by helping people catch a glimpse of the sea eagle. It was an exciting welcome for an awe-inspiring bird, and was also an inspiring welcome for the birders themselves.

“A wave of emotion flooded my entire body, and for just a moment I thought I would cry in front of all those people,” Zambello wrote of her experience seeing the eagle. “2021 had been difficult, and here, on the very last day of the year, a majestic, feathered being had brought people together in community, in common cause, to be in the presence of something wonderful.”

This Steller’s sea eagle, though perhaps not a stellar navigator, has clearly found a place in people’s hearts. And it has in ours as well.