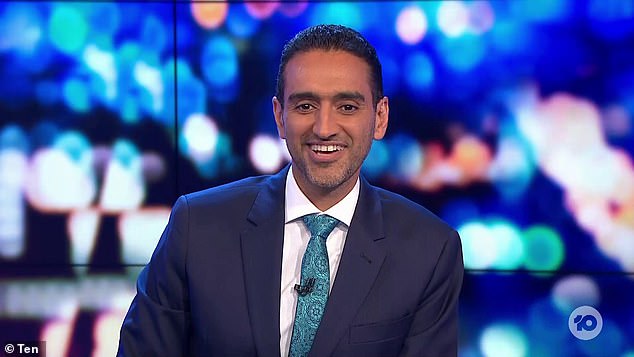 Former Liberal spin doctor Grahame Morris has been mocked by hosts of The Project for suggesting China and Russia would use transgender atheletes to ‘take down Australia’.

Mr Morris was asked to comment on allowing trans children to play women’s sport, before he suggested China and Russia would use the legislation to their advantage.

‘Some of the things she said were beyond the pale and she has apologised but if you come back to what she’s really on about, it is saving women’s sport and that is really important,’ he said.

‘We have feeder clubs for Aussie Rules clubs in Sydney where you’ve got big, muscly, fast, strong women who used to be blokes up against 16-year-old girls – is that fair?

‘And just imagine what the Russians or the Chinese will do if that little chink opens up.’

Host Waleed Aly laughed at the suggestion a local politician’s beliefs were a broader comment on international relations.

‘Are you really running this argument on the basis of a comment that a candidate on Warringah is making? That if she doesn’t run this, the Chinese and the Russians are coming for us and they’re going to take our medals?’ The Project anchor joked.

‘Look at what they’re doing now when there are different rules. We have seen what they will do,’ Mr Morris replied.

The co-hosts again laughed at the comment, with Aly mocking the former Liberal adviser’s comments.

‘Congratulations, Grahame, you have successfully made this a national security story and I didn’t think that was possible, but you’ve carried it off very, very impressively,’ he replied.

Ms Deves’ comments have been the topic of heated conversation as Labor and Liberal MPs alike call for Prime Minister Scott Morrison to disendorse the Warringah hopeful.

She has been forced to apologise over a series of comments that include calling Wear It Purple Day a ‘grooming tactic’ and that trans gender rights promoted ‘extreme body modification’.

On Tuesday, Mr Morrison said he won’t allow her to be ‘silenced’, drawing further criticism from even large sections of his own party.

‘I’ll stand up with her. My team is standing up with her, and we will make sure that she won’t be silenced. I know there are plenty of people who would like to do that.’

‘The Liberal candidate in Warringah was a captain’s pick by Scott Morrison and the NSW Premier Dominic Perrottet. They put her in there and immediately she’s exposed for making terrible comments about transgender children and mutilation,’ he told The Project.

‘She hasn’t just united the Labor Party around that issue, she has united half the Liberal Party.

Ms Deves was supposed to appear opposite current Warringah MP Zali Steggall at a community event on Tuesday night but withdrew.