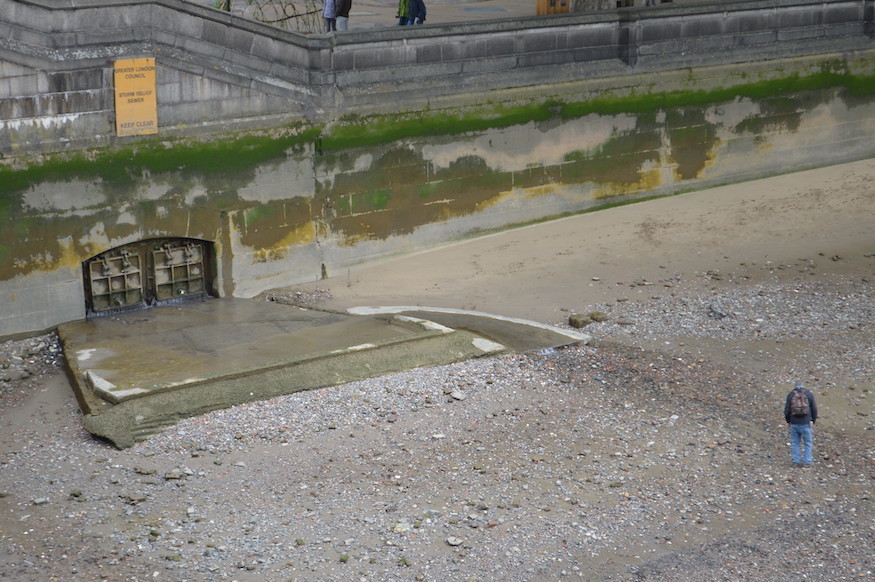 There’s treasure to be found for those who dare probe the dirty bottom of Old Father Thames.

London’s river has given up many secrets over the centuries. From mesolithic bridges to stolen watches, it’s all down there, just waiting to be discovered. Mudlarkers routinely find treasure on the foreshore, but the river sometimes yields its deeper mysteries. Here, we fish out the most intriguing. Wellies on…

What’s the oldest bit of London? We usually think of the Roman city (now the Square Mile) when talking about London’s origins, but people were living in the region for thousands of years before the Italians came over. They even left us some of their infrastructure.

Timbers from a jetty have been discovered in Vauxhall — right next to the MI6 building — that have been carbon dated to 4,500 BCE . Further wooden supports are preserved in the mud a few hundred metres upstream, and are thought to be from a bridge structure on 1,500 BCE.

Various human remains have also been found in the Thames from this distant era. Most recently, a 5,000-year-old thigh bone was recovered.

The Battersea shield and Waterloo helmet

The British Museum looks after these two magnificent objects. Both date from the Celtic period (the years before the Roman invasion), though a precise date is as slippery as the Thames mud from which they were plucked.

The Battersea Shield is perhaps the older of the two, and could have been crafted any time between 350 and 50 BCE. It was dredged from the Thames in 1857 during preparatory works for Chelsea Bridge. No one knows why it ended up in the Thames, though the leading theory is that this was a votive offering.

The double-horned helmet is of similar vintage, and was found near Waterloo Bridge in 1868. It is too flimsy to have offered any protection, so was probably a ceremonial piece. This is the only horned helmet from the Iron Age found anywhere in Europe.

Chucking statues into rivers isn’t just a modern phenomenon. This bronze head is confidently identified as the Emperor Hadrian. It was found in the Thames near London Bridge in 1848, and comes from a one-and-a-half-times life-size statue of the big man that would have once been a familiar landmark in Londinium.

The Thames, like any river, has always served as a dumping ground for ill-gotten gains. In 1865, a gang of thieves — who revelled in sobriquets like “Carroty Fred” and “Velvet Ned” — raided a jewellery shop on Cornhill. For one reason or another, they abandoned some of their swag in the Thames near the under-construction Blackfriars Bridge. Police divers managed to recover 12 watches from the haul — perhaps further Victorian timepieces remain there to this day.

Perhaps the most curious recovery from the Thames concerns a long-lost typeface. The Doves Press was an esteemed publishing operation formed in the early 20th century by TJ Cobden-Sanderson and Emery Walker. All their books were printed in a house typeface known as Doves Type. By 1909, the two men were in bitter disagreement about the rights to the typeface. The sorry affair ended with Cobden-Sanderson throwing the metal moulds and types into the river at Hammersmith Bridge (it took 170 trips).

The fly-tipped type languished on the bottom of the Thames for over a century. Then, in 2015, designer Robert Green managed to salvage 150 of the pieces from the bed of the Thames, which helped him to refine a digital version of the font. Remarkable.

It’s not only inanimate objects that are pulled from the Thames. In 1962, six workmen were rescued from the riverbed when the waters inundated a caisson in which they were working. The six were winched out by crane just in time, though one was treated in hospital for pneumonia. It’s not clear from press reports what exactly they were working on — the dig was in the Thames by Nine Elms Lane.

Mudlarkers are people who sift through the Thames mud looking for treasure. That might be literal treasure, like old coins, or simply a clay pipe from the Georgian era (a very common find — we’ve even found a few ourselves).

People have been combing the foreshore for centuries, but the practice has got particularly popular in recent years thanks to high profile ‘larkers like Lara Maiklem. Her many finds include a 400-year-old sword, a number of pilgrim badges and a Tudor tile with a dog’s paw print. If you’re tempted to follow in her squelchy footsteps, note that a permit is needed from the Port of London Authority to dig in the London foreshore.

A secret tunnel to St Paul’s

Only joking. We’re not sure exactly what was the purpose of this leftover infrastructure of industrial London. But you can kind of imagine one of those hatch-like structures leading to a tunnel.

And finally, a trove that we know is on the bed of the Thames but has yet to be rediscovered. In 1929, a cache of 60,000 badges was tipped into the Black Deep channel at the mouth of the river, while a police constable saluted. These were the identity badges worn by the drivers and conductors of horse-drawn buses, no longer needed in the age of the motor bus. Read the full story here.

All images by the author.