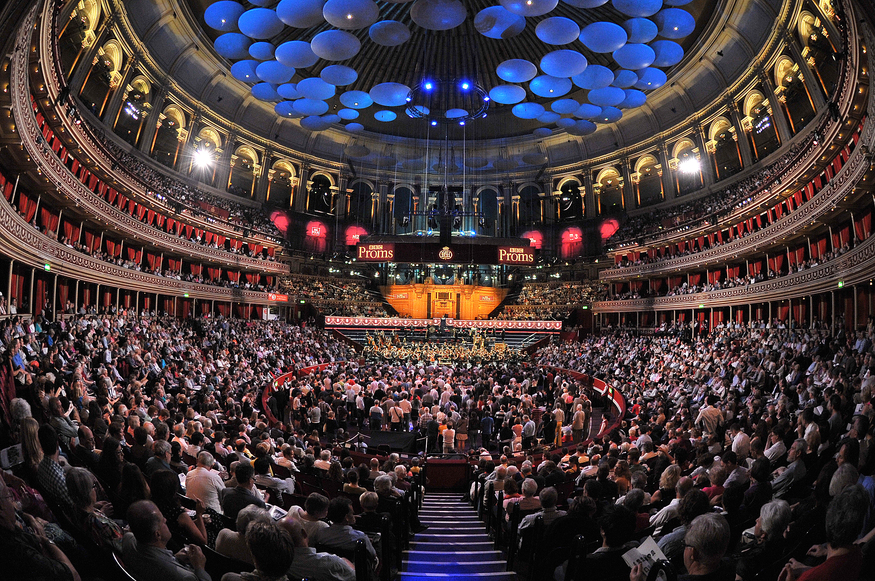 Never done the Proms before? You’re missing out. This eight-week festival of live classical music — and plenty more besides — is in London from 15 July-10 September 2022. Here’s what you need to know.

What are these Proms you speak of?

The first Prom was in 1895, established by the conductor Henry Wood who wanted “to bring the best in classical music to the widest possible audience” (no sniffiness from the outset, then). Over the decades, it’s burgeoned into an eight-week jamboree of concerts, workshops, talks and family events. This year, there are over 84 shows.

Where do the Proms take place?

The majority of concerts (73 of them to be exact) take place at the flagship venue, South Kensington’s Royal Albert Hall. This dazzling bowl of Victorian splendour, holds an audience of over 5.5k. To paraphrase the Beatles, now you know how many folks it takes to fill the Albert Hall.

Satellite venues include Cadogan Hall near Sloane Square and (new for 2022) Printworks London in Surrey Quays. Nearly all of the concerts are broadcast live on Radio 3, and many are shown on TV/BBC iPlayer too.

What are the highlights of the 2022 Proms?

That very much depends what you’re into. There’s a slew of peerless classical classics from the ilk of Haydn, Beethoven and Tchaikovsky — performed by some of the greatest living musicians and conductors (think Yuja Wang, the National Youth Orchestra of Great Britain, Christiane Karg, Kazuki Yamada and Robert Ames). These days it’s not just traditional classical music that gets a look-in though.

But here are some shows on the programme that’ve caught our attention:

How do I get tickets for the Proms?

Tickets for most performances are on sale now via the Proms website — though some of the performances which are likely to be more popular, such as the Chris Packham Prom mentioned above, don’t go on sale until 20 May. If you’re hoping to go to a number of shows, there’s also a handy Proms Planner (though you’ll need to register for this by 20 May). Or you can buy a physical paper (remember that?) Proms guide for £8.99.

If you want to be a proper ‘prommer’, read onto the next section…

What are the cheapest tickets at the Proms?

That’d be the ‘promming’ tickets. Around 1,000 are available for every single Proms performance, and cost just £7.12 each. The catch is that you’ll need to queue up on the night, and buy them from the box office — they now take contactless as well as cash. (A limited number of promming tickets also go on sale between 9am and noon on the day of each performance.)

The more popular the performance, the earlier you should show up. It’s not an exact science, but the Albert Hall reckons if you can get out of work on time and head straight over, you should be OK. We’ve had personal disappointments of not quite making it in. If that happens, drown your sorrows in nearby mews pub The Queen’s Arms.

What exactly is promming anyway?

It’s short for promenade, and in this case means you don’t get a seat. You choose whether to head up into the gallery (spectacular views, and you can indeed stroll around a bit), or into the arena (tends to be more cramped, but you can see the performers up close). You can take a picnic in with you but any booze may be confiscated. Boo.

Are the Proms just for adults?

Absolutely not. Well behaved children over the age of five are welcome, and there’s a prom aimed squarely at kids, CBeebies Prom – A Journey into the Ocean (happening twice on 23 July), which under fives can attend.

Children aged 5-18 also get half-price tickets to all shows.

Do I need to dress up posh?

Top hats and tailcoats please. Only joshing. Wear what you like, within reason. We’ve even seen some prommers stalk about barefoot in the gallery (arguably a bit pretentious, but maybe it helps them contemplate Shostakovich or something).

When is the last night of the Proms?

This year’s flag-waving finale is on 14 September. It’s wildly popular, and ticketing for it is different (and more complicated) than other Proms. Check out the details here.

Your flag needn’t be a Union Flag. There was a myth started a few years back that EU flags are banned — it’s not true.