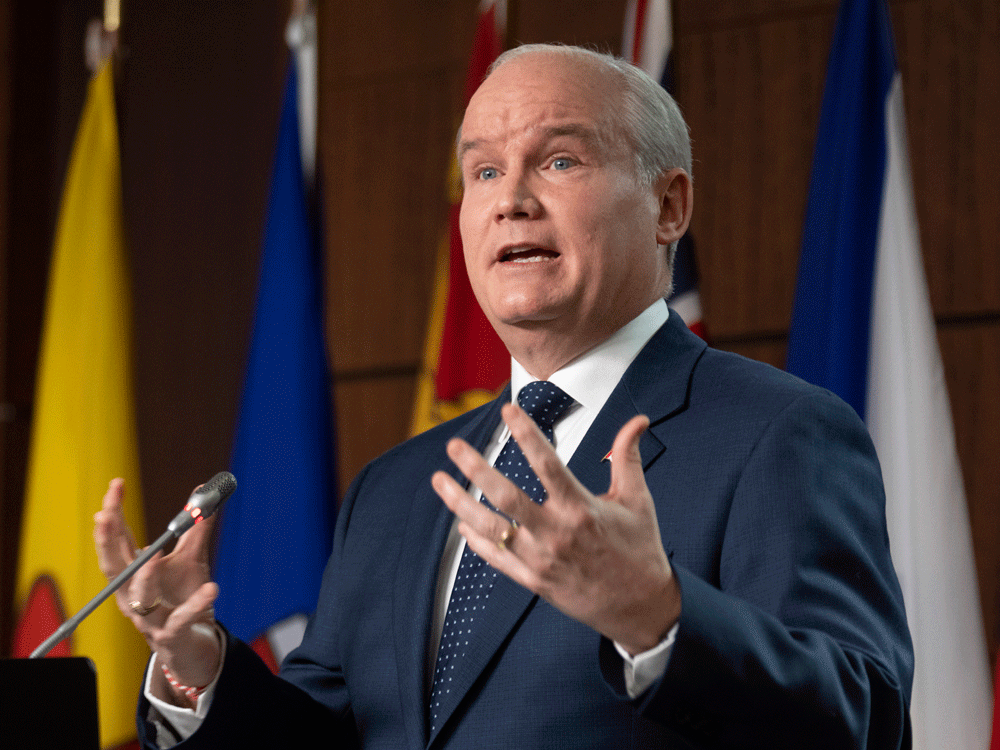 It’s official: Conservative leader Erin O’Toole is a dead man walking. At publication time, thirty-five MPs have signed a letter asking for a caucus leadership review vote, possibly as soon as this Wednesday’s caucus meeting. According to the Globe and Mail, sources claim that they have at least 63 of 119 Conservative members who will vote O’Toole out. That is, if he doesn’t pull the trigger himself, and call a vote, or just call it quits.

After this weekend’s protests in Ottawa, one can’t say it’s a surprise. Conservative MPs Pierre Poilievre and Leslyn Lewis were working the crowd all weekend, giving coffee and sympathy to protesters and yammering about “freedom” until their vocal cords gave out. They were basically kickstarting their respective leadership campaigns, sticking the knives in O’Toole so fast it’s a wonder he hasn’t bled out on the floor.

On Sunday, the two even got an endorsement. Organizers of the protest said O’Toole should quit and be replaced by Poilievre or Lewis. “If they were smart, they would pull Erin now. Right now. Get him out of there,” said spokesman Benjamin Dichter. “We all think that Pierre resonates with the vast majority of Canadians in his opposition to Justin Trudeau.”

Talk about a poisoned chalice. Dichter is a former Conservative candidate who in 2019 spoke at the first People’s Party of Canada conference where he declared that “political Islam is rotting away at our society like syphilis.” One of the other organizers, Patrick King, has ranted about a conspiracy “to depopulate the Anglo-Saxon race because they are the ones with the strongest bloodlines” and thinks that COVID is “a man-made bioweapon that was put out to make people sick.”

Many other images from this protest are equally disturbing. Shots of people hoisting confederate flags, “Trump 2024” signs, and Canadian flags adorned with swastikas. Reports of hooligans taking food from the homeless, videos of protesters dancing on the Tomb of the Unknown Soldier and swarming the Rideau Centre.

It’s true that this narrative obscured the stories of people who joined this convoy because they lost their business, or because their kids missed months of school, or because they were just fed up and felt they “had to do something.” But before you blame the media for this “selective” portrayal (I hear the emails firing already), let me say this.

Everyone in that crowd, including Poilievre, Lewis, and O’Toole had the chance — nay, the obligation — to call out the intolerance. Not after the images hit Twitter, but immediately. On the spot.

In supporting the protest, the Tories are making the same Faustian bargain the Republican party made with Angry America and its champion, Donald Trump. The Republicans thought they could tap into working class anxiety and channel it at the ballot box. Too late, they realized they had tapped into far more, including xenophobia, misogyny and white supremacy. And if they disagree with Trump, they are now vilified and excommunicated.

Conservatives need to take a long hard look at themselves, what they stand for, who’s leading their parade, and whose company they keep. Because if they don’t, they will wake up one day and they won’t recognize the face in the mirror.

But Canadians will. And guess what? It’s the Liberals who will be free — to govern the country for the next 100 years.