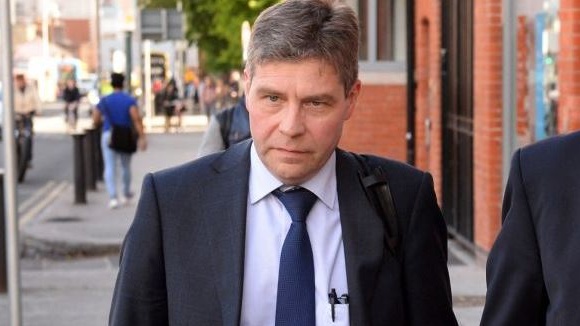 The father of a man convicted of assaulting Kevin Lunney has been found guilty of the harassment and intimidation of the director at Mannok, the group of companies formerly owned by Sean Quinn.

Sean McGovern, of Springtown Road, Kinawley, Co. Fermanagh pleaded not guilty to charges of relating to the harassment and intimidation of four people; Mr Lunney, his wife Bronagh and fellow Mannok directors Liam McCaffrey and Tony Lunney, a brother of Kevin Lunney, when he appeared at Enniskillen Magistrates Court on Monday.

In February 2019, Sean McGovern’s son, Bernard, was filmed on CCTV attacking Kevin Lunney and another Mannok director, Dara O’Reilly, as the pair ate a meal at an Applegreen Service Station in County Cavan.

The amateur boxer was given credit for the six-and-a-half-months he had already spent in jail before his case came to trial.

During his hearing at Enniskillen Magistrates Court on Monday, Bernard’s father Sean, admitted he had erected several posters in and around his local area in an attempt “to highlight my son’s case”.

When asked by Mannok’s barrister who owned the posters with the pictures of his son on, Sean McGovern answered: “I got the posters made. I owned them.”

The 63-year-old was found not guilty of harassing Bronagh Lunney and the company directors but, for his part in erecting posters with a picture of his son, Bernard, and the word “victimised” printed on them, he was found guilty of the harassment and intimidation of Kevin Lunney and sentenced to four months imprisonment suspended for three years.