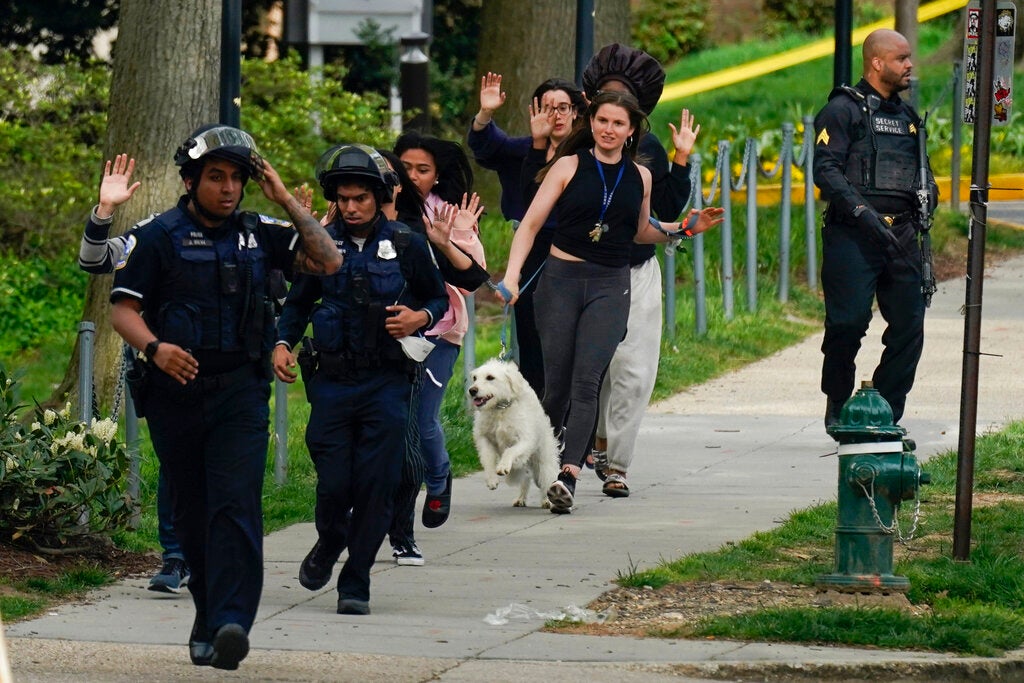 WASHINGTON (AP) — At least four people, including a 12-year-old girl, were shot when a gunman unleashed a flurry of bullets in the nation’s capital Friday, leading to lockdowns at several schools and leaving a community on edge before the suspect was found dead hours later.

The suspected gunman was found dead Friday night inside an apartment at the scene as Metropolitan Police Department officers conducted door-to-door searches of buildings in the area.

Hours earlier, police believe the man had erected a “sniper-type setup” with a tripod and rifle in his apartment and began firing indiscriminately at people walking below, Metropolitan Police Chief Robert Contee said. The shooting was recorded and posted online on 4chan, an online message board.

The four victims — a 54-year-old man who is a retired police officer, a woman in her 30s, a woman in her mid-60s who was grazed by a bullet, and a 12-year-old girl who was shot in the arm — were all expected to recover, police said. For hours, authorities had warned worried residents to stay inside their homes while they conducted a massive manhunt for the shooter.

Police did not release the suspect’s name, pending notification to his family, but earlier had said they were seeking a 23-year-old Virginia man as a person of interest in the shooting. The man had been “linked to social media postings” that emerged as part of the investigation, Assistant Police Chief Stuart Emerman said.

The gunfire erupted shortly before 3:30 p.m. near the corner of Connecticut Avenue and Van Ness St. in the Van Ness neighborhood of Washington, just as parents were picking up their children from the Edmund Burke School, a private college preparatory school.

The echoing bursts of rapid gunfire rocked the normally quiet neighborhood that’s home to several schools and colleges and dozens of embassies. It sent frantic parents running from the scene and put Burke and other nearby schools on immediate lockdown.

Bibi Stewart of Anne Arundel, Maryland, was approaching the line to pick up her 12-year-old twins when she heard the gunfire ring out. She said it sounded like the shots were coming from above and at a distance.

“They did it right at dismissal,” she said.

Stewart said she saw glass shattering in a bridge connecting different wings of the school and she saw the tires of cars in the pickup line shot out.

“They’re just saying they’re OK” and hiding in the school with their friends and adults, she said of her children.

Police suspect some of the bullets fired from the high-powered rifle may have traveled several blocks. At least two businesses nearby reported bullet holes in their windows.

Police in tactical gear were seen escorting people — including college students from nearby campuses — out of apartment buildings in the area. Officers pointed their rifles upward toward other buildings and windows as the people moved quickly down the street with their hands raised above their heads.

“I had to look in parents’ eyes tonight who are terrified … thinking of what might happen to their children,” District of Columbia Mayor Muriel Bowser said at a news conference. “And we have experienced this too much in our country. The epidemic of gun violence, the easy access to weapons, has got to stop. People should not be scared taking their children to school.”

Police went door-to-door in area buildings as they searched for the shooter for several hours. As officers were approaching the fifth-floor apartment where the gunman was holed up, they believe he took his own life.

“We will get to the bottom of this. We will find what the motive is,” Contee said. “His intent was to kill and hurt members of our community.”

The gunman had posted a video of the shooting on 4chan, though police are still working to determine whether it was streamed live or recorded and then uploaded online, Contee said. The video shows people running frantically as rapid gunfire rains from above and the gunman seemingly following them through a sight as they flee for cover.

The University of the District of Columbia, which is located nearby, went into lockdown, telling students and staff to shelter and stay in place. In a tweet Friday, the college said there was an “active shooting incident near student housing.”

Eduardo Bugay, a student at the college, said he was in his first-floor apartment in the AVA building — the building where the gunman was eventually found — when he heard the shots.

“At first I was confused,” he said, not sure what he was hearing. Then, he said, he got scared.

Bugay said the university sent emails telling students to stay in place. About 30 to 40 minutes after he first heard the gunshots, police came knocking on his door to escort him and others from the building.

A slew of law enforcement officials and emergency crews were sent to the scene. Agents from the FBI arrived in an armored vehicle and the U.S. Secret Service said its officers were aiding police in the search and at the scene. The Bureau of Alcohol, Tobacco, Firearms, and Explosives said its agents were also assisting in the investigation.

Separately on Friday, emergency medical crews were called to the U.S. Supreme Court around 6:30 p.m. after a man attempted to set himself on fire outside the building. The man was rushed by police helicopter to a local hospital and his condition wasn’t immediately known.