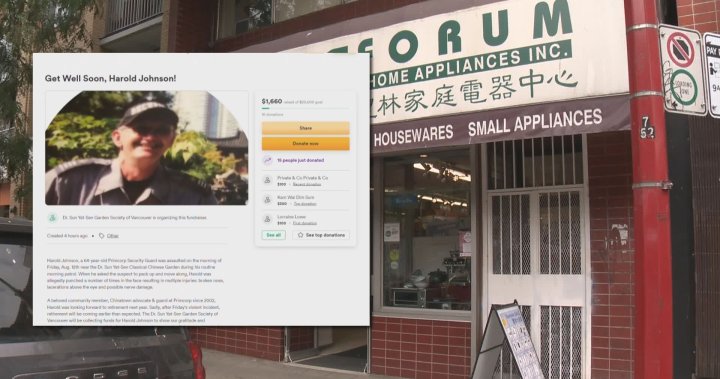 A group of merchants met in Vancouver’s Chinatown Saturday morning to discuss how they can support the recovery of the neighbourhood’s longtime and much-beloved security guard after he was injured in an apparent random attack Friday.

“Harold is like family to us here in Chinatown,” said Tracy To of Forum Home Appliances.

Harold Johnson, 64, a well-known security guard who’s helped keep Chinatown safe for two decades, was noticeably absent from the corner of East Pender and Main Streets, where he’s often seen on patrol near the TD branch.

“It’s not an easy job to be a security guard in Chinatown, and he does it fearlessly every single day,” To told Global News in an emotional interview.

Johnson was attacked around 11 a.m. on Aug. 12 as he made his regular morning rounds at the Chinese Cultural Centre near East Pender and Columbia Streets.

Vancouver police said the guard was taking pictures in a laneway when he was repeatedly punched by a stranger.

Bystanders intervened to stop the attack and witnesses called 911, said Sgt. Steve Addison, but the suspect fled before police arrived.

Johnson, who was conscious and talking at the scene despite being left beaten and bloodied on the street, was taken to hospital with head injuries and possible broken bones.

“As appalling as it is, an attack on Harold is like an attack on Chinatown,” said Deputy Chief Const. Howard Chow of the VPD.

The incident happened about a block away from where an 87-year-old man was bear-sprayed in the face on May 20.

Police said the suspect in that unprovoked attack, who has yet to be identified, also hurled racial slurs at the Asian senior.

Chow said making the neighbourhood safe will take a co-ordinated effort from law enforcement, businesses, residents and all levels of government.

“It’s not just those that frequent Chinatown, those that live in Chinatown that it matters to,” said Chow.

“People who live in different jurisdictions, different cities on the outskirts of Chinatown, they will say this is heartbreaking what’s taking place down here. Everybody needs to pitch in if we’re going to get this problem fixed.”

Chow said police need witnesses and victims to do exactly what happened Friday, and step forward to report crimes.

“And if it’s safe, step in and intervene.”

Officers were able to locate and arrest a suspect in Gastown hours later.

Kevin Aaron Hibbard, 44, has since been charged with one count of assault.

Hibbard appeared before a Justice of the Peace Saturday and was released from custody on an order with no financial obligation.

According to court records, this is Hibbard’s first criminal charge in B.C., although a history of traffic violations suggests he may have once been employed as a professional driver.

His next court date is scheduled for Sept. 8.

Businesses are rallying to help Johnson recover and a GoFundMe campaign has been set up by the Dr. Sun Yat-Sen Classical Chinese Garden.

“Our sense of community is so strong, we’re all fighting for our own survival, for the survival of our own community,” said To.

“I hope that people can support Harold, support Chinatown.”

Johnson had recently told members of the community that he planned to retire next year.

“He was proudly saying, ‘I’m getting ready to retire,’ and I was so happy for him. So I hope that this doesn’t ruin any of his plans,” To said.

Emotionally beat, shaken and scared, Johnson visited Chinatown briefly Saturday and had a conversation with Chow.

Johnson told Global News he wants to return to work and hopes he won’t have to walk away from the job he loves.

“I’m just hopeful that he heals and mends well and is able to get back down to his beat in Chinatown,” Chow told Global News.

“Chinatown is being attacked, so his job is becoming so much harder every day and I don’t know how we move forward from here,” added To.

“He is making a difference, we need him.”