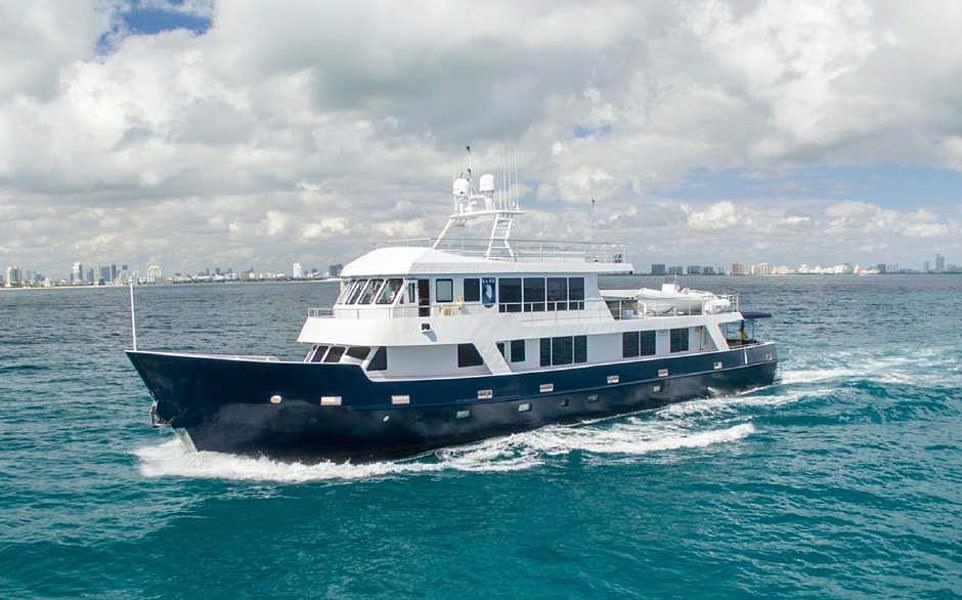 A luxury yacht seized while trying to smuggle cocaine worth £160 million into the UK will be auctioned at the end of the month.

The MY Kahu was intercepted in international waters heading to the UK in September 2021 following a tip off she was carrying two tonnes of cocaine.

The 120ft yacht is currently moored in Torquay and will be sold between April 27 and April 28 on an online auction with no reserve.

The MY Kahu, pictured, which was seized while smuggling two tonnes of cocaine into the UK is being sold off in a No Reserve auction at the end of the month

The National Crime Agency, who received a tip off from the Australian Federal Police who cracked an encrypted messaging network, found this cocaine on board the 120ft yacht

The vessel, which was built for the Royal New Zealand Navy in 1979 has a fabulous living area with panoramic sea views

In theory, someone could take home the 40-year-old yacht for as little as £1 but a previous report in Super Yacht News valued the vessel at around £1.25 million.

The vessel was commissioned in 1979 for the Royal New Zealand Navy as a dive tender but was converted in 2010 into a luxury yacht.

Potential buyers can travel to Torquay on April 20 to view the vessel ahead of the online sale.

Anyone hoping to bid for the boat must lodge a £1,000 deposit with Belfast auctioneers Wilsons ahead of the sale. Unlucky bidders will be refunded their cash.

The 43-year-old vessel is capable of trans-Atlantic and round-the-world trips.

It was en-route from the Caribbean to the UK in September 2021 when it was intercepted by the National Crime Agency, UK Border Force and Australian Federal Police some 80 miles off the coast of Plymouth.

A deep rummage search of the vessel found two tonnes of cocaine hidden inside the boat.

The boat has five luxurious staterooms and accommodation for four crew members.

It is powered by a pair of six-cylinder Cummins diesel engines capable of 13 knots or seven knots when cruising.

At cruising speed she is capable of travelling approximately 8,000 miles when her 32,000-litre tanks are full of diesel.

The boat has an aluminium hull and superstructure.

Government contracts manager for Wilsons Auctions told the Belfast Telegraph: ‘We are delighted to manage the sale of this high-profile asset. It is reported that around £160m worth of cocaine was found on board MY Kahu and that is why the vessel is now being offered for sale by auction.

‘We are proud to facilitate auctions on behalf of our government and law enforcement agency clients. We play an important role in realising a large quantity of assets on behalf of these clients and in recent years, these auctions have seen us responsible in returning £130 million back into the public purse.

‘The online element of the auction is extremely convenient for bidders around the world to register and get involved. This will be an exciting one to watch.’

The boat was intercepted after the Australian Federal Police cracked an encrypted phone system the smugglers were using.

If staring out over the blue ocean gets boring, the new owner can put on the television, pictured right

The vessel also provides quarters for a crew of four, but at 120ft, it would be possible for a family to operate the boat

As part of their Operation Ironside, Australian officials were able to read messages sent over the AnOm network, enabling them to pass on information to colleagues in the UK.

Speaking in September 2011, Matt Horne, NCA deputy director, said: ‘This is a massive haul of cocaine with an estimated street value of around £160m.

‘There’s no doubt these drugs would have been sold on into communities across the UK in such ways as County Lines fuelling more crime and misery.

‘Organised crime groups are motivated by money. The deprivation of these drugs will smash a hole in the OCG’s plans and ability to operate.

‘Also, the arrests of the men transporting the drugs means the crime group has lost trusted offenders who would have been key to their operation.

‘We continue to work with partners at home such as Border Force and those abroad such as the AFP to protect the public from the Class A drugs threat.’

On the bridge, the vessel is equipped with a range of modern communication technology and stern and bow thrusters – enabling it to manoeuver it in port

With the diesel tanks fully topped up the MY Kahu, pictured, is able to cover 8,000 miles

The 120ft yacht can cruise comfortably at eight knots and has a maximum range of 8,000 miles at a cost  of £6.

‘Operation Ironside has opened the door to unprecedented collaboration across law enforcement agencies around the globe.

‘This result highlights the importance of the AFP’s partnership with the NCA to combat offshore transnational organised crime that impacts both of our countries.

‘The AFP and NCA have a strong, historic relationship and both agencies recognise the significant threat to national security posed by transnational organised crime.’

Anyone seeking to buy a luxury yacht for the fraction of the price of an Oligarch can register for the auction here.