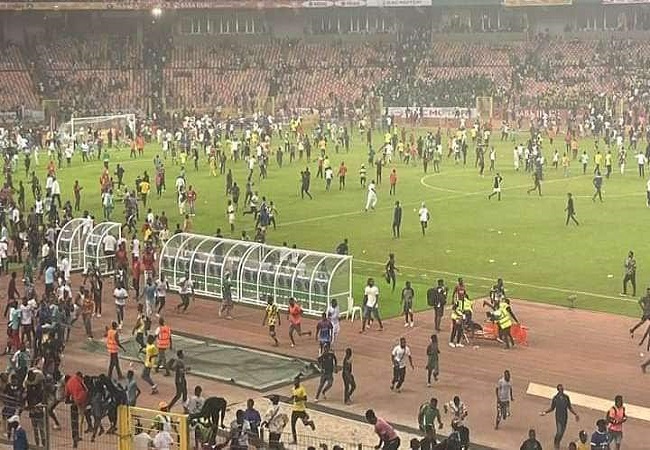 Nigerian fans went bananas and ransacked their own stadium after the Super Eagles were eliminated from the World Cup by their West African archi-rivals the Black Stars Of Ghana on Tuesday night (March 29). And this was too much for some of their fans to bear.

After being knocked out by the Black Stars via the away goals rule, fans started  throwing objects at both the small group of visiting fans in the Moshood Abiola National Stadium and the Ghana players.

According to reports from Reuters, local security was slow to react to the violence, which included a pitch invasion on the final whistle. And the Ghana players were left to battle their own way towards the tunnel in scenes that will no doubt draw the ire of the Confederation of African Football and FIFA.

Some of fans smashed benches while others chanted “Pinnick must go! Pinnick must go!!”, referring to the president of the Nigeria Football Federation (NFF), Amaju Pinnick.

The disturbances come just months after eight people were killed and dozens others injured in a reported crush outside the Paul Biya Stadium in Olembe which was hosting an Africa Cup of Nations match in Cameroon.

The post-match stampede in MKO Abiola stadium caused the death of Joseph Kabungo who was Confederation of African Football (CAF) and FIFA doping doctor.

It was the first time that the Super Eagles had failed to qualify for the global football show case in 16 years.