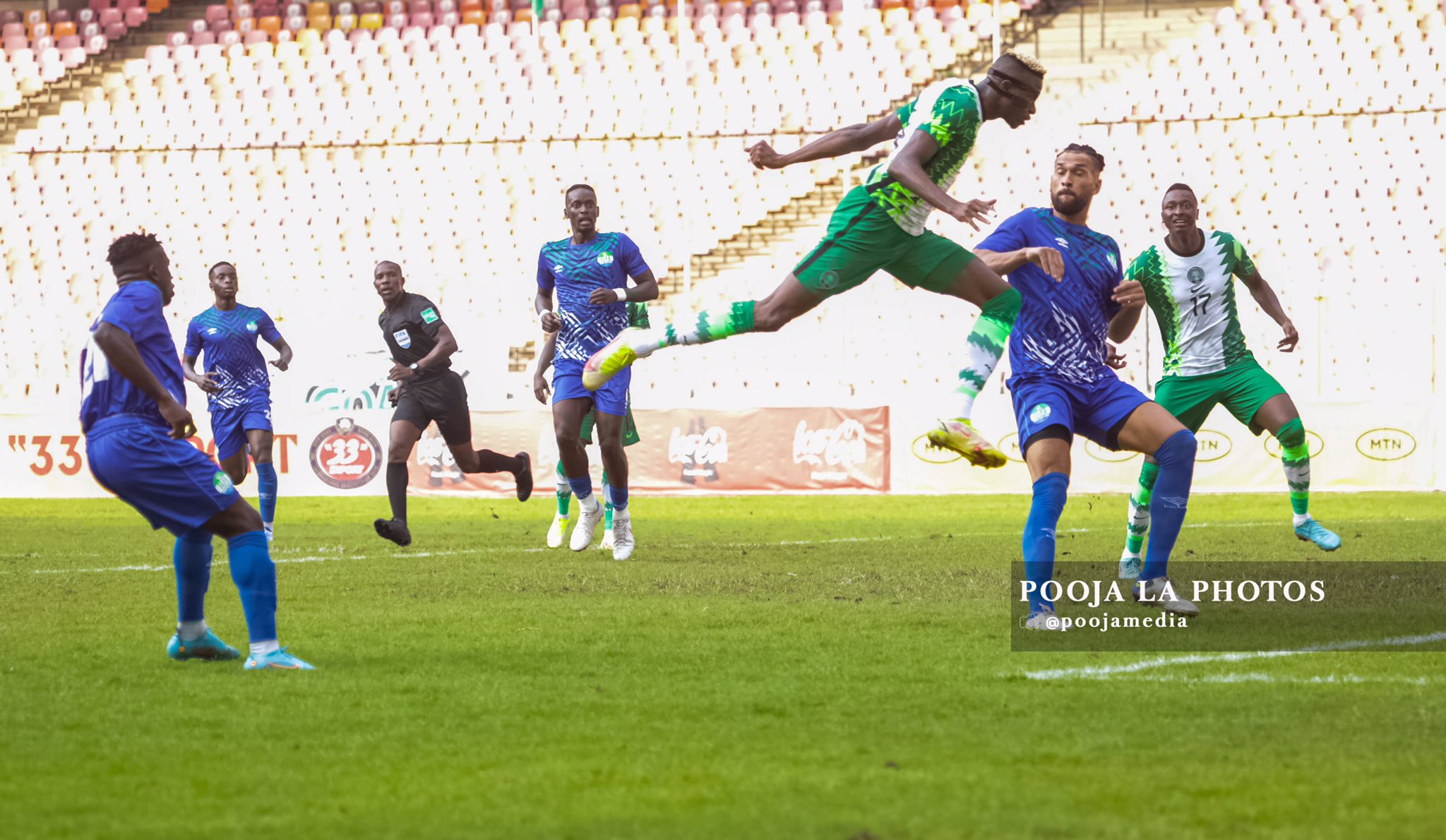 Following his team’s hard-fought 2-1 triumph over Sierra Leone in their inaugural Group A game of the 2023 AFCON qualifiers in Abuja, Jose Peseiro earned his first competitive win as Super Eagles coach.

The Eagles had lost three of their previous five games and drew two going into Thursday’s matchup.

The Eagles overcame the Leone Stars with to goals from Alex Iwobi and Victor Osimhen, with Moses Simon assisting on both goals.

Sierra Leone got the first effort on goal in the fourth minute, but Francis Uzoho deflected Mohamed Turay’s shot over the bar.

Osimhen almost broke the deadlock in the sixth minute, but his header from Calvin Bassey’s cross was inches wide of the target.

On ten minutes, Osimhen went close with an instinctive strike from the edge of the box after receiving a feed from Alex Iwobi that went just wide.

Morsay headed in a left side cross to give Sierra Leone the lead after 11 minutes.

The Leone Stars almost extended their advantage in the 15th minute, but Uzoho got down well to palm the effort against the post.

In the 16th minute, Iwobi equalised for the Eagles after receiving a feed from Simon on the edge of the box and shooting into the far corner with the goalkeeper stranded.

On 20 minutes, Samuel Chukwueze and Simon both came close to scoring, with the former’s shot being blocked inside the area and the latter’s header being saved by the Leone Stars goalkeeper.

Osimhen made a headed knockdown in the 34th minute, but the Sierra Leone goalkeeper got to the ball before Sadiq, averting the danger.

Osimhen made it 2-1 on 41 minutes, stretching to slide in Simon’s headed cross.

After a ball into the box from Sadiq was not effectively cleared, Simon had the chance to extend the Super Eagles’ lead, but his strike was blocked by the Sierra Leone goalkeeper.

The Eagles made their first change before the start of the second half, with Oghenekaro Etebo replacing Sadiq.

Chukwueze had an opportunity to score six minutes into the second half after receiving the ball on the edge of the box, but his shot went wide.

On 55 minutes, Chukwueze had a great chance to make it 3-1 after being set up by Osimhen, but his effort went inches wide.

Sierra Leone almost equalised on the hour mark when replacement Amadou Bakayoko’s poked attempt from a cross struck the side netting with Uzoho well beaten.

The Eagles had a chance to expand their advantage from a corner a few minutes later, but a Sierra Leonean player knocked the ball off the line.

On 68 minutes, the Eagles went near again, but Bassey’s dangerous low cross evaded every man inside the box.

With 20 minutes remaining, Osimhen leapt to his highest point to head Bassey’s cross just wide of the target.

Chukwueze raced past his man on the right on 74 minutes, but his cross was too high for Osimhen to head.

William Troost-Ekong, the Eagles’ assistant captain, was stretchered off with 10 minutes remaining and replaced by Kenneth Omeruo.

Ademola Lookman and Shehu Abdullahi were also in the running for Chukwueze and Ola Aina, respectively.

On 84 minutes, Lookman almost scored after latching onto a headed pass from Osimhen, but his shot was deflected for a corner.

Bakayoko came close to making it 2-2 in added time, but the ball was snatched off his legs by Aribo, who he fouled.

The Eagles’ next match is on Monday, June 13th, in Agadir, Morocco, versus So Tomé and Principe.