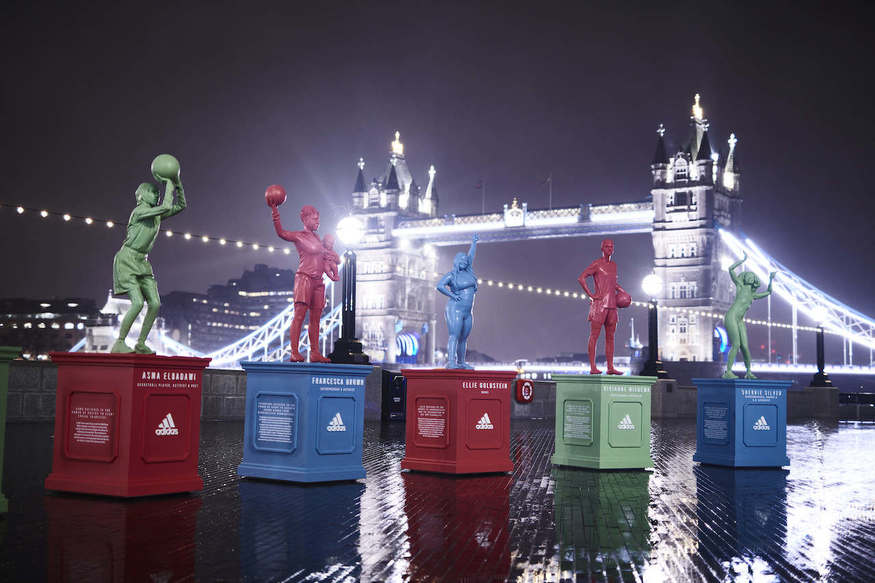 The colourful statues — installed by sports brand Adidas, and appearing in red, blue and green — are of:

Adidas says it hope that the figures — which are crafted from a 3D scan of each person, and made from sustainably-recycled marine farmed waste plastics — will help push for greater representation of women in London, and “inspire the next generation of changemakers.”

Although gradually improving, London’s recognition of women — and especially BAME women — through statues and plaques remains poor. Adidas says that 21% of the city’s statues are of men, and a further 8% of animals. Women, it claims, are the subject of just 4% of London’s public statues.

Adidas is also using the statues to promote its new sports bra collection, which has been released following research that over 90% of women could be wearing the wrong size.

Among the permanent statues of inspiring women you can see elsewhere in London are those of activist Millicent Fawcett, nurse Mary Seacole and spy Noor Inayat Khan (although this one’s a bust).

English Heritage has previously admitted that representation of women in the city could be much better, and is encouraging public proposals for more blue plaques for female figures.

The Adidas statues will remain on the South Bank for around two weeks (from 18 February), before moving on to take up longer-term placements elsewhere in the UK.