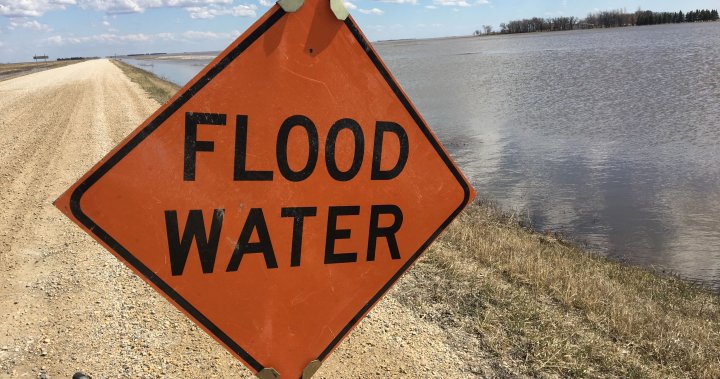 The province says there is a high risk of moderate to major flooding along the Red River and its tributaries this spring while most Southern Manitoba basins are at risk of moderate flooding.

This information was part of the Manitoba’s first spring flood outlook released Friday.

But the province warns this all depends on the conditions from now until the spring melt. The outlook will be impacted by the amount of snow and spring rains in the months ahead, frost depth at the time of runoff and the timing and the rate of spring thaw.

A climate outlook cited by the province shows normal to above normal precipitation for most Manitoba basins from March-May.

Western Manitoba, including the Assiniboine River, Shellmouth and Dauphin Lake basins has received 60-80 mm of precipitation since November 1, while Eastern and Northern Manitoba have accumulated 80-140 mm in that time frame.

The Roseau and Rat River basins could see a high risk of moderate to significant flooding, while the Assiniboine and Souris rivers and the Whiteshell lakes area all face a moderate flooding risk.

The risk of flooding is low for the Interlake region and Northern Manitoba.

The Red River Floodway is expected to be operated while minimal operation of the Portage Diversion is anticipated.

When it comes to most Manitoba lakes, the risk of flooding is low, and most of Manitoba’s major lakes are expected to be within their desirable range after spring runoff.

“The province completed a flood access route last fall and they also upgraded Highway 75 coming from the south so there is a route around the flood area,” Groening said.

While flood forecasters are hoping for nothing substantial in terms of precipitation, farmers could certainly use a little more.

In terms of mitigating the drought, Agriculture and Agri-Food Canada Climate Specialist Trevor Hadwen says a best-case scenario would be an early spring and a slow melt.

‘We’re still way off normal in terms of moisture levels over the course of the last six months and the last year,” Hadwen said. “We need more moisture in some form, preferably spring rain.”

The province will update its flood outlook next in late March.