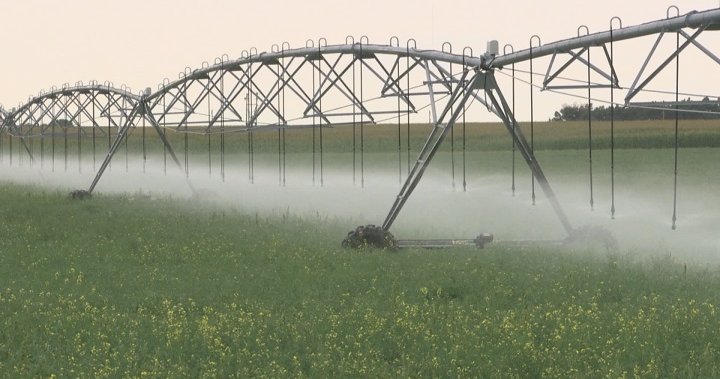 Water issues continue to plague southern Alberta farmers as few details remain available as to why or what is happening.

Those who rely on the Lethbridge Northern Irrigation District to water their crops and animals are worried this blockage, and standoff between the government and the Piikani Nation, could cause detrimental results.

“Is it an issue on the reserve or is it a government issue? We don’t know. So when is it going to be resolved? That’s the scary thing; we don’t know what the issue is and we don’t know when it’s going to get resolved. So where do we go and what do we do?” Troy Bischler, a cattle producer, said.

“We maybe have a week left of water in the dugout… after that, there’s really no Plan B.

“The producers in this area, we’re talking a quarter million head of cattle that need water every day.”

In a statement to Global News on Friday, Stan Grier, chief of the Piikani First Nation, said the nation is not blocking major water infrastructure, but acknowledged there was an issue to be resolved.

In turn, the government also acknowledged there are outstanding issues that need to be resolved.

However, so far, neither party has confirmed exactly what the “issue” is.

The lack of information around the topic is making farmers worried, especially Bischler who said his cattle usually consume upwards of 20 gallons of water a day, meaning his small reserve won’t last long.

“To feed these animals, it is a non-profit right now. The feed costs are so astronomically high, and now throw a water issue on top of that, I don’t know where we’re at,” he said.

“If it gets settled, that’s great, but for that water to get into the canal, into the system, and get here to our delivery point so we can fill the dugout — that’s going to take upwards of a week. So really, we’re in trouble.

In a joint statement to Global News on Tuesday evening, Minister’s Jason Nixon and Rick Wilson, said “productive meetings” had been held to help resolve the issue.

“We want to thank Chief Grier and Council for their hard work and partnership in this process.”