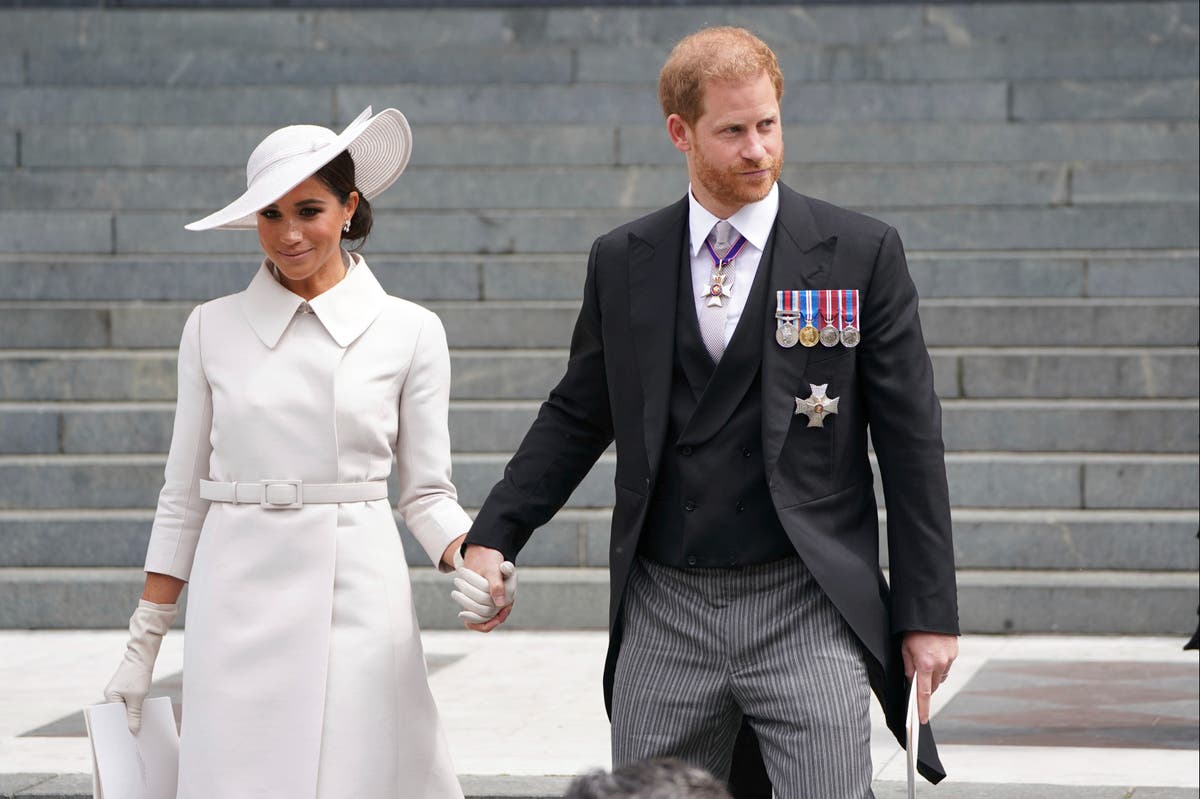 Whenever the Duke and Duchess of Sussex encounter the Queen, Prince Charles and the Duke and Duchess of Cambridge, it is always about who comes out on top. And in the days after the Queen’s platinum jubilee celebrations, a battle royale is still raging for the upper hand in a very personal PR war. It is being fought across the Atlantic and the weapons range from photography to social media and behind-the-scenes briefings.

The consequences for the monarchy and the Queen’s heirs reach far beyond the restrained hoopla of the jubilee weekend.

Harry and Meghan’s presence at the event, according to one member of the extended family, was a “testbed of future dealings” — an attempt to find more stable ground between the Sussexes and the core royals and to move beyond the cantankerous dealings of the past 18 months.

As such, the couple’s comeback was deemed a partial success, as both sides strove to avoid the stiff images of William and Harry failing to engage at Prince Philip’s funeral and the unveiling of the Diana statue at Kensington Palace. According to a friend of Prince Charles, “this was a day when everyone wanted to be positive — who sulks, loses”. Even Harry, often tense around his family, looked calm.

Given the Queen’s advanced age and mobility issues, the jubilee also provided an insight into how the brothers and their respective spouses might cope after her reign. And, this being a dynastic business, the presentation of the next generation as a continuation was highly salient. The Cambridges, with their artful images of their three children, subtly introduced the idea of the eldest George as the next-but-two heir to the throne, reminding us of the tri-hierarchy. But the Sussexes, too, are visually savvy and their statement accepting the invitation emphasised that Harry and Meghan were “excited and honoured to attend The Queen’s platinum jubilee… with their children”.

As such, the Sussexes focused on the first birthday party of daughter Lilibet, who was named in honour of the Queen’s nickname as a child. Though, according to US media, even that ended up in a publicity tussle when it was made clear that the Queen’s encounter with her latest great-grandchild would not be photographed. Instead, the Sussexes arranged to have a charming shot of “Lili”, with Harry’s red curly hair, taken by Misan Harriman — the photographer who chronicles the couple’s family occasions — at Frogmore Cottage on the Windsor estate where they lived after their marriage.

Behind the scenes, the children — Archie, three, and Lillibet — were introduced to the Queen as well as grandpa Prince Charles and Camilla (who has emerged as the peacemaker in a fraught relationship between father and youngest son). A reported invite to the

Cambridges and their three children to attend the first birthday bash as “an olive branch” sounds more like spin than substance — communications between the brothers remain sticky and formal.

The New York Post’s Page Six gossip column claims the brothers “spent no time together” and the decision by the Sussexes to spend as little time on the ground in the UK as possible could look, to cite the veteran journalist and royal biographer Tina Brown, like “leveraging the Queen” to their advantage. But the Cambridges’ schedule too was arranged to minimise embarrassing contact. The couple were at Cardiff Castle on the day of Lillibet’s birthday party, well away from the visitors.

For the Sussexes then, the weekend was a partial success. There were some uplifting pictures, but none with the Queen herself, allegedly to the frustration of their communications gurus and Netflix bosses. Certainly, the couple need to keep the sense of regular royal oxygen around their “brand” in the US. The viral image of Lillibet’s first birthday was tagged along with Meghan’s advocacy work for World Central Kitchen, which supplies meals for those displaced by conflict. In truth, they are in a world in which their business success is closely related to their ability to “leverage” the very Firm they departed from on poor terms. The couple’s heavy reliance on a lucrative Netflix deal for their main income has failed to live up to early promise. When I interviewed the Netflix boss Reed Hastings a couple of years ago, his excitement at clinching the couple’s exclusive rights was palpable. It would, he promised, create “very widely viewed, exclusive content with exclusive access”. Since then the streaming company has lost subscribers and made cutbacks — including a series “Pearl”, a story of “a 12-year-old girl who finds inspiration in a variety of influential women throughout history” co-produced by Meghan and David Furnish, Elton John’s husband.

It’s hardly a secret in LA that the appetite from studio executives for “worthy” didactic projects by Meghan has waned and the couple has reportedly succumbed to inducements to make a “juicier”, “at-home with the Duke and Duchess of Sussex-style” docuseries for Netflix about their life in Montecito.

While, for the most part, the couple receive snarky press coverage in the UK, the images of Meghan in a Dior “greige” coat and Grace Kelly diamond earrings at the jubilee were widely viewed. As one glossy-magazine photographer in New York puts it, “Kate and William are great for the European market and that has boosted their international appeal. Here [in the US], there is still a fascination with the actress -and-prince romance and a lot of sympathy for them.”

To that end, the relentless subplot of Meghan’s “sad dad” Thomas Markle surfaced once again over the weekend when he was photographed being transported across the border from his Mexican home to a hospital in California after an apparent stroke. That also places pressure on Meghan to “reach out” to a father and family who, whatever the health complications, have been unforgiving in blaming her for a rift reaching back before her wedding to Harry.

But in this long-runnning family drama, it is the episode featuring the Windsors which makes the plot turn. And, in a good way, the jubilee proved an anti-climax, demonstrating that, with heroic amounts of pre-organisation and no small degree of avoidance footwork by the main royals, the glamorous but troublesome duo can return for royal events “without world war three starting”, as one acquaintance of the Cambridges puts it wearily. Still, from the “photo wars” to the military timetabling, it remains a right royal minefield. The Sussexes have left the royal family but do not really wish to escape it. They depend, for fame and prosperity, on a connection with the “firm”. It’s a dutiful pause in hostilities, in honour of a beloved Queen and (great) grandmother, but it surely isn’t the end of them.