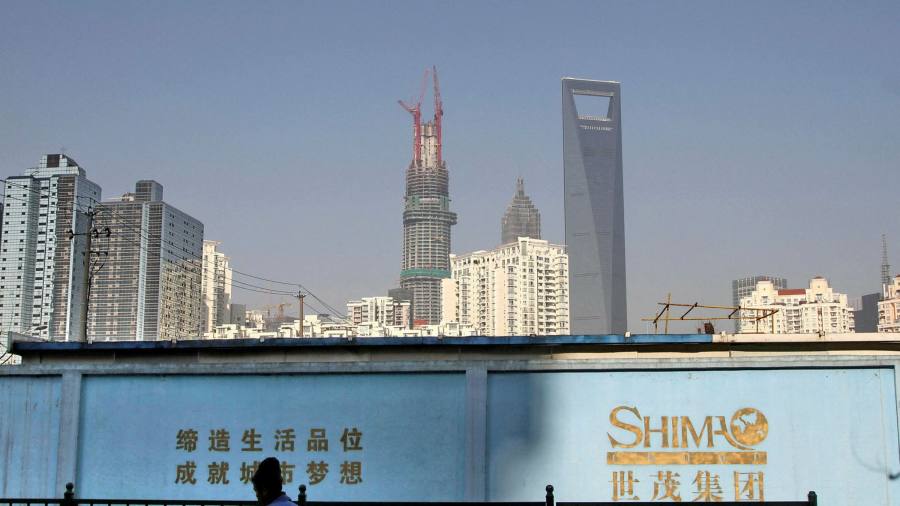 The Shanghai Stock Exchange suspended trading in several bonds of Chinese property developer Shimao, a day after the company’s failure to make a loan payment increased fears that a cash crunch will spread more widely across the country’s embattled real estate industry.

Trading in three renminbi-denominated bonds from the residential developer, which unlike many of its struggling peers recently held an investment-grade credit rating, was temporarily suspended after sharp falls followed reports on Thursday of the missed payment.

The problems at Shimao suggested that China’s real estate sector woes, which have mainly affected companies with riskier credit ratings such as Evergrande and Kaisa Group, could spread to more highly rated developers as they grapple with a slump in housing sales and a loss of investor confidence.

The country’s economically important property sector has slowed markedly over recent months after construction delays and default fears at heavily indebted Evergrande starved it of financing and fuelled a wider cash crunch. Evergrande and several of its peers have already defaulted on international markets.

Chinese authorities have responded by installing government figures in a risk committee to manage Evergrande’s restructuring and announcing stimulus measures to support the economy. But Shimao’s problems suggested those developments had not resolved the liquidity issues afflicting the sector.

A Shimao unit said in a statement on Friday that while it faced liquidity pressures, it has not defaulted on any of its public debt and it was taking measures to increase property and asset sales. But its bonds came under immediate focus on offshore bond markets, where it has borrowed $7bn, compared with $19bn at Evergrande.

One investor in Hong Kong suggested that other “double B names”, referring to the credit rating just below investment grade, would also experience strains. “People thought Shimao should be relatively safe before,” the person said.

The trading halt came after China Credit Trust, a company that raised trust financing on behalf of the group, said in a letter to investors that one of Shimao’s units had defaulted after missing a Rmb645m ($103m) payment. On Friday, Shimao said it was in talks over the payment and that the matter would not affect its other debts.

To counter concerns over asset bubbles, Beijing imposed rules last year on real estate developers that limit their borrowing. Unlike many of its peers, Shimao did not breach any of the “three red lines”, highlighting the vulnerability of safer businesses to market volatility.

Big developers in China are experiencing slowing apartment sales, exacerbating a cash shortage at a time when their refinancing options are already constrained. Shimao, which is based in Shanghai, had sales of Rmb270bn in 2021, down 10 per cent on a year earlier. In December, its sales were down 68 per cent, according to estimates from analysts at Citi.

The company burst into the market spotlight in November on concerns related to its mainland trust products, and it was downgraded by international rating agencies despite stating in December that its operations were “normal”. Fitch noted last month that the company faced “diminished investor confidence”, which could affect its ability to refinance.

“Some strong property developers in China have resumed issuing domestic debt securities, but that avenue may not be available for Shimao if investor confidence is not restored,” the rating agency said.