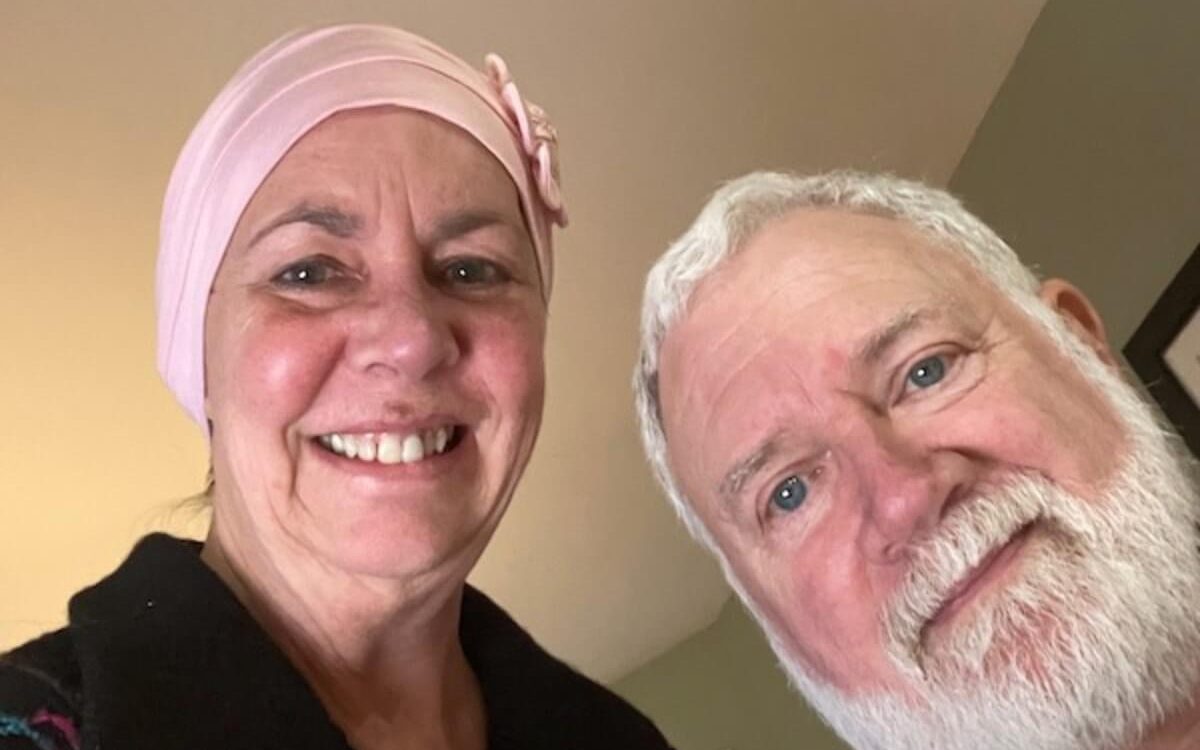 Kim Laramy set an ambitious goal for herself at the beginning of 2021 — to do some form of workout every single day.

Come September she was feeling good about what she had accomplished so far. In other words, Laramy, who lives in Durham, was kicking butt. On Thursday, Sept. 22, she had just finished her usual warm-up session with her personal trainer and was preparing to deadlift 75 pounds.

“Not an unusual weight,” she said, “but as soon as I picked it up something felt weird. I remember saying to Jess Cote, my trainer, ‘Something is wrong,’ and then I passed out.”

Laramy’s partner, Wayne Clark, raced to the hospital when he got the call, arriving at the same time as the ambulance. He gave regular online updates to friends and family, beginning with, “Long story short, Kim had a subarachnoid hemorrhage. They stabilized her and did an initial CT at Mercy, then transferred her to the neurosurgery service at Maine Med. It was a long, long night.”

A subarachnoid hemorrhage means that a blood vessel in the brain has ruptured or been damaged and there is bleeding into the space between the membrane that covers the brain and the brain itself. When that happens it’s a life-or-death situation. In Laramy’s case, an aneurysm, or weak spot in a blood vessel, had ruptured. She had a 50-50 chance of surviving. For those who make it, about 66 percent will suffer some permanent brain damage. Nearly 15 percent of people with a ruptured aneurysm die before they even get to the hospital.

Kim passed the first test. On to the next.

The following morning, she spent five hours in the operating room while neurosurgeon Dr. Robert Ecker repaired the blood vessel that had ruptured. Clark, who has spent his entire adult life as a health care communicator and has seen just about everything, was in awe at what Ecker was able to accomplish.

“Think about it,” he wrote in the online journal he was keeping. “They insert a catheter in the groin and pass it up through to the brain. There are obstacles along the way, like the kidney. Once there, they ‘light up’ the cranial vessels with contrast agent and see where one or more is leaking. Then — using the same catheter — they clamp off the leak. If that’s not magic, I’m not sure what is.”

Two days after the aneurysm burst in Laramy’s brain, she was taken off the ventilator and was able to breathe on her own. It was a momentous day. With each passing day, she got better and stronger, but on the evening of day six a CT scan showed evidence of vasospasm — a narrowing of the blood vessel that can cut off blood flow.

“So they watched her like a dog watching you eat,” Clark wrote. She would vacillate between confusion, inability to say words, and sometimes delirium and being “sharp as a tack.”

In the beginning, she was still in what she called “an extreme state of confusion.” For example, she had trouble navigating throughout her house.

“Things felt jumbled,” she told me, “which was very odd to me. I couldn’t figure out the way to the kitchen or the bathroom or my closet. I had to sort of relearn where stuff was. I was also really tired and had to take a nap every single day, and I just couldn’t remember things as much as I wanted to.”

Laramy, 66, is not the first in her family to have a brain aneurysm. Sadly, in 2019, she lost her 43-year-old daughter Shawnda to one. A pre-warning may have been a history of headaches, but no one suspected she might have an aneurysm. And 35 years ago, Laramy’s mother began having double vision and severe headaches. A brain scan revealed that she had an aneurysm, but it hadn’t burst. To prevent that from happening, she had surgery to clamp the affected artery. She’s now 87 and doing well.

When I learned that three people in Laramy’s family had developed brain aneurysms, my first thought was that there must be a genetic link. In most cases, however, aneurysms are not hereditary. Still, sometimes aneurysms will occur in first-degree relatives (parents, children or siblings). When that happens, they are considered “familial aneurysms,” according to the Brain Aneurysm Foundation. That means other family members may be at increased risk.

The neurosurgeon says even though she’s now had one aneurysm, Laramy is not at increased risk of having another. Also, exercising probably didn’t cause it to burst — it was likely a coincidence, she said. As for getting back into her workout routine, she was pleased to learn that it was a possibility. It was important, though, to listen to her body, which isn’t as strong as before the aneurysm.

One of the most gratifying improvements for Laramy is that she can work again. As a senior strategist for a local marketing and design company, she needs her brain to be in top form. She confesses that she jumped the gun a bit and tried to go back too soon but ended up learning a valuable lesson.

“I’m somebody who doesn’t stop,” she said. “I just keep barreling through and you can’t barrel through something like this. It has to be done systematically and in the right way, so that was hard for me, very hard. My brain’s working again now, but for a while there it wasn’t.”

Here are some lessons I learned from Laramy: It pays to have a good attitude and to persevere. When she realized it was too soon to return to work, she didn’t simply give up, she gave herself more time to heal. When it was clear she couldn’t pick up her strength training where she left off, she didn’t quit. Instead, she set new goals for herself.

Life isn’t quite the same as it was before that fateful day in September, but it’s good. Kim Laramy is still kicking butt.