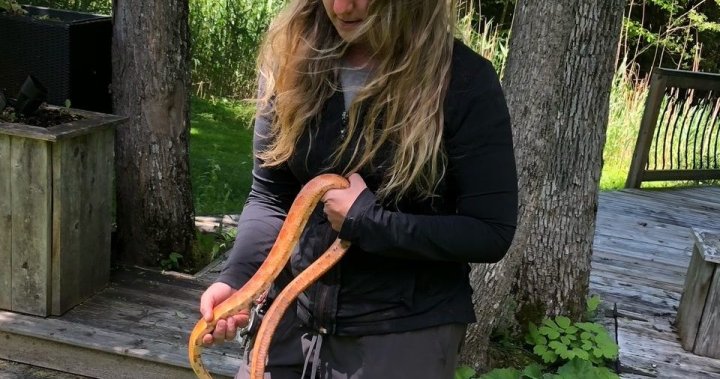 A reptile sanctuary in the Peterborough area says a snake found in the village of Bridgenorth on the weekend is indigenous to Florida.

According to Canada’s Dinosaur Park and Reptile Sanctuary (formerly known as the Indian River Reptile Zoo), a resident in Bridgenorth on Saturday discovered a “strange-coloured” snake on the back porch of her home.

According to curator Melinda-Lee Baker, the resident captured video of the snake and forwarded it to the non-profit sanctuary just east of Peterborough. Curator Bry Loyst quickly identified the reptile as an albino corn snake which is found in Florida.

Albino corn snakes have red and white scales and red eyes. On average they can grow between 35 and 48 inches long.

“The snake is harmless but it cannot survive in our climate,” Baker said.

Baker said reptile sanctuary specialist Lindsay Merker was dispatched within 10 minutes of Loyst receiving the video and assisted in the snake’s capture.

“Unfortunately, it cannot be returned to Florida,” Baker said. “Corn snakes are very common in the pet trade.”

Baker said the search for the snake’s owner is underway.

“Thus far, no one has come forward to claim the animal as theirs so the snake is still in our care,” Baker said.

The sanctuary is home to 400 reptiles from around the world and is considered Canada’s largest reptile non-for-profit sanctuary.