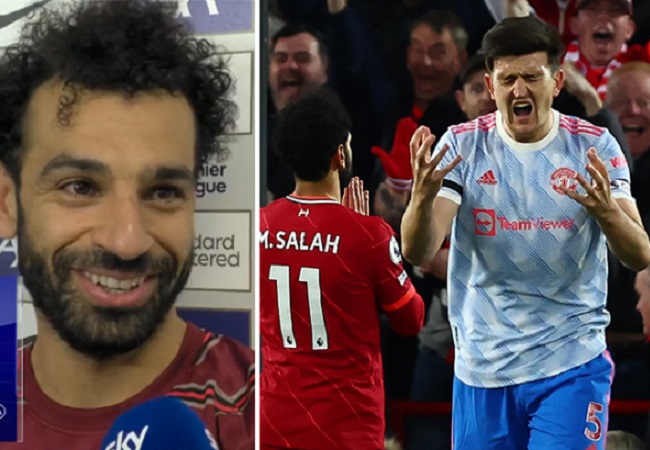 England’s two most successful clubs locked horns on Tuesday in a Premier League with Manchester United suffering 4-0 humiliation against Liverpool.

The Egyptian superstar Mohamed Salah ended his goalsocring drought with a brace while his African rival Sadio Mane and Luis Diaz also scored one goal each in their comfortable win.

This means that Manchester United have lost 9-0 on aggregate to Liverpool this season, having been thrashed 5-0 at home earlier in the campaign. As a result, fans of the struggling English giants were left livid and frustrated.

Shortly after the final whistle, Salah, who ended the game with two goals and an assist, appeared to add insult to injury by trolling the Red Devils. The former Roma ace was asked why Liverpool have dominated this rivalry this term, to which he responded.:

“In midfield, they make our life easier.

“We have a clean sheet here and there. Once we get the first goal, we want the second and the third. It was a top performance by us and hopefully, we continue.”

And just like that, Salah legitimized the biggest criticism of Manchester United this season that they are so easy to play against.

After his interview went viral, the Anfield sensation took to Twitter to clarify things. He pointed out that he meant Liverpool’s midfield and defense made life easier for him as an attacker. Not Rangnick’s men, adding that he would not disrespect his peers in such a manner.