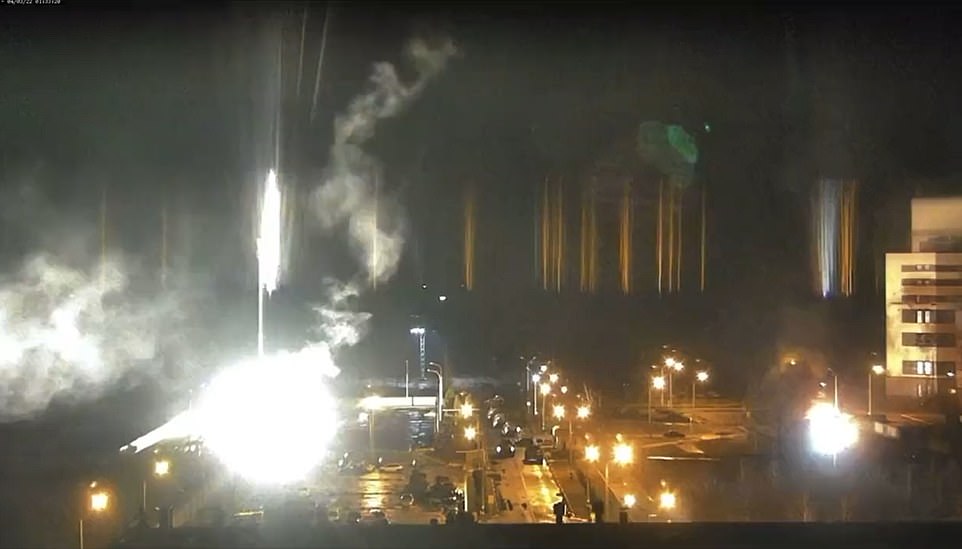 Europe’s largest nuclear plant was on fire in the early hours of Friday morning after coming under attack by Russian troops.

Andriy Tuz, a spokesperson for the Zaporizhzhia plant, 350 miles south of Kyiv, said in a video posted on Telegram that one of the six reactors was on fire, but the reactor was not in use.

‘There is a real threat of nuclear danger in the biggest atomic energy station in Europe,’ he said.

He told Ukrainian television that shells were falling directly on the Zaporizhzhia plant, but the reactor on fire was under renovation and not operating, AP reported. He said there is nuclear fuel inside, however.

Firefighters cannot get near the fire because they are being shot at, Tuz said.

A live feed from the station showed a line of military vehicles firing at buildings at the nuclear plant, causing flames to break out at the site – sparking fears of a radiation disaster in the nation currently under invasion by Russian forces.

The International Atomic Energy Agency said, around an hour before daybreak in Ukraine on Friday, that the country’s nuclear officials said the fire has not affected ‘essential’ equipment.

In response to the attack, Ukraine’s President Volodymyr Zelensky accused Russia of ‘nuclear terror’ while British Prime Minister Boris Johnson will seek an emergency UN Security Council meeting in the coming hours, a Downing Street spokeswoman said. ‘The UK would raise this issue immediately with Russia,’ they added.

‘Russia must immediately cease its attack on the power station and allow unfettered access for emergency services to the plant.’

As the chaotic scenes unfolded, a Kyiv official told The Associated Press elevated levels of radiation had been detected near the site of the plant. A plant spokesman later said they remained at normal levels, and Ukraine’s 24 TV channel quoted the plant’s director as saying that ‘radiation security’ had been secured.

The International Atomic Energy Agency on Thursday night said they were deeply concerned – but emphasized that no increase in radiation levels had been reported.

‘#Ukraine regulator tells IAEA there has been no change reported in #radiation levels at the #Zaporizhzhia Nuclear Power Plant site,’ they tweeted.

The Ukrainian atomic energy ministry said that one of the six generating units at the plant had been struck by Russian fire. Zaporizhzhia has six nuclear reactors and produces almost a quarter of Ukraine’s power.

Dmytro Kuleba, Ukraine’s Minister of Foreign Affairs, said there was ‘firing from all sides’ at the plant.

‘Russian army is firing from all sides upon Zaporizhzhia NPP, the largest nuclear power plant in Europe,’ he wrote on Twitter.

‘Fire has already broke out. If it blows up, it will be 10 times larger than Chornobyl! Russians must IMMEDIATELY cease the fire, allow firefighters, establish a security zone!’

Kuleba was referring to the 1986 disaster in the Chernobyl nuclear power plant in the north of the country, when the Ukraine was in the Soviet Union.

But after several hours of uncertainty, Ukrainian authorities said the site had been secured.

‘You know the word ‘Chernobyl,’ he said in a video posted on Friday morning, calling on Russia to stop its attack.

‘No country other than Russia has ever fired on nuclear power units. This is the first time in our history. In the history of mankind. The terrorist state now resorted to nuclear terror,’ he said in the video message.

A senior US official said President Joe Biden had spoken with his Ukrainian counterpart about the attack, while a Downing Street spokeswoman said Johnson had also spoken to Zelensky.

The spokeswoman called the situation ‘gravely concerning’, adding: ‘Both leaders agreed that Russia must immediately cease its attack on the power station and allow unfettered access for emergency services to the plant.

‘The Prime Minister said the reckless actions of President Putin could now directly threaten the safety of all of Europe. He said the UK would do everything it could to ensure the situation did not deteriorate further.

‘The Prime Minister said he would be seeking an emergency UN Security Council meeting in the coming hours, and that the UK would raise this issue immediately with Russia and close partners.

‘Both leaders agreed a ceasefire was crucial.’

The live feed from the plant at one point appeared to show the flashing lights of emergency vehicles arriving to the scene, but their path was blocked by tanks stationed along the road leading up to the reactors.

There has been fierce fighting between local forces and Russian troops as they battled for the key energy producing region, the mayor – Dmytro Orlov – said in an online post reporting the fire, adding that there had been casualties without giving details.

A government official told The Associated Press elevated levels of radiation are being detected near the site of the plant. The official spoke on condition of anonymity as the information has not yet been publicly released

A live feed from the Zaporizhzhia station showed flames at the site in the east of Ukraine, having earlier showed tanks firing at buildings – sparking fears of a radiation disaster in the country currently being invaded by Russian forces

Pictured: The plant’s Reactor 1 shown on a CCTV camera, which is said to have been struck by Russian weapons

Zaporizhzhia has six nuclear reactors, making it the largest of its kind in Europe, and accounts for about one quarter of Ukraine’s power generation. One report said the fire was about 150 meters away from one of the reactors

The mayor of Enerhodar, the town that is home to the plant, said earlier that Ukrainian forces were battling Russian troops on the city’s outskirts.

Video showed flames and black smoke rising above the city of more than 50,000, with people streaming past wrecked cars, just a day after the U.N. atomic watchdog agency expressed grave concern that the fighting could cause accidental damage to Ukraine’s 15 nuclear reactors.

Ukrainian authorities reported Russian troops were stepping up efforts to seize the plant and had entered the town with tanks on Thursday, in a bid to win control of the key energy producing region.

Civilians defied Russian troops for a second day running to protect the nuclear plant. They were shown setting up make-shift road blocks in an attempt to barricade the route to the facility.

‘Many young men in athletic clothes and armed with Kalashnikov have come into the city. They are breaking down door and trying to get into the apartments of local residents,’ the statement from Energoatom said.

Ukrainian Prime Minister Denys Shmyhal joined Ukraine’s president in calling on the West to close the skies over Ukraine’s nuclear plants as fighting intensified around the major energy hub on the left bank of the Dnieper River and the Khakhovka Reservoir.

Shmyhal said he already had appealed to NATO and the International Atomic Energy Agency, the United Nations’ atomic watchdog.

‘Close the skies over Ukraine! It is a question of the security of the whole world!’ Shmyhal said in a statement Thursday evening.

The U.S. and NATO allies have ruled out creating a no-fly zone since the move would directly pit Russian and Western militaries, with fears such an action could be the spark that sets off a third World War.

Earlier, huge plumes of black smoke and fire were seen coming from a makeshift barricade on the main route to the Zaporizhzhia site, as an air raid siren wailed in the background.

Two brave civilians can be seen throwing molotov cocktails in the direction of Russian forces, in a video posted to Facebook by mayor Orlov.

Missiles lighting up the sky have also been fired on Thursday evening as Russian troops advance through Ukraine.

Zaporizhzhia is the largest of Ukraine’s nuclear sites, with six out of the country’s 15 reactors.

Russia has already seized control of the decommissioned Chernobyl nuclear plant, scene of the world’s worst nuclear disaster in 1986.

Research by specialists for Greenpeace International found that, in a worst-case scenario where explosions destroy the reactor containment and cooling systems at Zaporizhzhia, it could create a disaster far worse even than Fukushima in Japan in 2011.

Huge plums of black smoke and fire were seen coming from a makeshift barricade on the main route to the Zaporizhzhia site in eastern Ukraine, as an air raid siren wailed in the background

Two brave civilians can be seen throwing molotov cocktails in the direction of Russian forces, in a video posted to Facebook by the mayor of Enerhodar, Dmitri Orlov

On Wednesday Ukrainian civilians built makeshift roadblocks with bright orange lorries and piles of tyres on the main route to the Zaporizhzhia site.

Brandishing Ukrainian flags, the army of volunteers created a human barricade near the city of Enerhodar to stop advancing Russian troops.

Anton Gerashchenko, an adviser to Ukraine’s interior ministry, warned on Wednesday the Russians could create a ‘new Chernobyl’ if the plant was damaged.

‘Because of Vladimir Putin’s madness, Europe is again on the brink of a nuclear catastrophe,’ he wrote on Facebook.

‘Russian generals – think again! Radiation does not know nationalities, does not spare anyone!’

Russia has written to the International Atomic Energy Agency saying its forces have taken control of the area around the plant.

Brandishing Ukrainian flags, the army of volunteers created a human barricade near the city of Enerhodar to stop advancing Russian troops

A man carries a sandbag to seal the entrance to the Emergency Care Hospital in Zaporizhzhia, the site of the Europe’s largest nuclear plant

The UN nuclear watchdog said Moscow claimed technicians at Zaporizhzhia were continuing their ‘work on providing nuclear safety and monitoring radiation in normal mode of operation’.

The letter on Wednesday added: ‘The radiation levels remain normal.’

IAEA chief Rafael Grossi warned on Wednesday that any ‘accident involving the nuclear facilities in Ukraine could have severe consequences for public health and the environment’.

He said it was ‘imperative to ensure that the brave people who operate, regulate, inspect and assess the nuclear facilities in Ukraine can continue to do their indispensable jobs safely, unimpeded and without undue pressure’.

Jan Vande Putte, co-author of the risk analysis, said: ‘So long as this war continues the military threat to Ukraine’s nuclear plants will remain.

‘This is one further reason, amongst so many, why Putin needs to immediately cease his war on Ukraine.’

The fight to protect Zaporizhzhia is symbolic of the everyday heroism shown by the Ukrainian people.

Vitali Klitschko, the mayor of Kyiv, told the BBC he had seen a line ‘hours long’ of civilians queuing up to get weapons.

His brother Wladimir, who was also a top fighter, said: ‘This is our home. Our parents are buried here, our children go to school here.

‘Why should we flee? What would you do if someone gets in to your house? You defend it.’