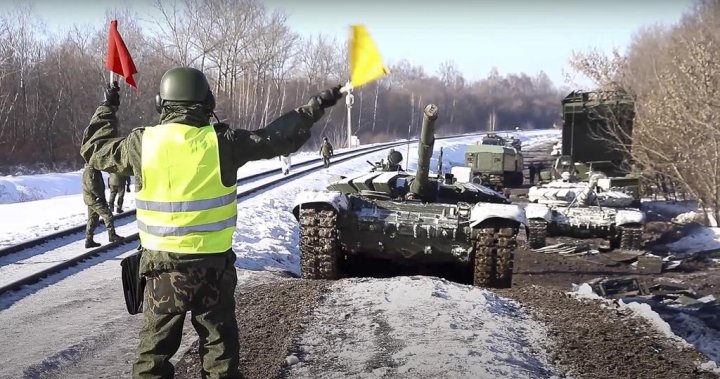 NATO allies accused Russia of misleading the world by saying it was returning some troops to bases, reporting that Moscow has instead added as many as 7,000 more forces near its tense border with Ukraine. The alliance warned Thursday that the buildup has only strengthened its resolve.

After a handful of positive signals from Russia that eased tensions earlier in the week, the pendulum appeared to be swinging in the opposite direction again. The NATO chief welcomed Kremlin offers to keep pursuing diplomatic solutions, but he and others warned that the U.S.-led alliance has still seen no sign of the military withdrawal that Moscow announced.

“We have seen the opposite of some of the statements. We have seen an increase of troops over the last 48 hours, up to 7,000,” said British Defense Secretary Ben Wallace ahead of a meeting of the western alliance in Brussels.

“We are deadly serious,” he added, “and we’re going to face the threat that is currently being posed.”

That squared with what a U.S. administration official said Wednesday.

Russia has massed an estimated 150,000-plus troops near it ex-Soviet neighbor, sparking concerns that an attack is imminent. None materialized Wednesday, as feared, and Ukrainians spent the day defiantly celebrating their unity and resolve to face down any Russian threat.

Russia not scaling back military efforts near Ukraine, says NATO

Moscow said several times this week that some forces are pulling back to their bases, but it gave virtually no details that would allow an independent assessment and Western leaders quickly cast doubt on those statements. On Thursday, NATO allies knocked down the Russian assertions again — and warned that they are ready to counter any aggression.

“The consequences of this mass buildup – nearly 60% of Russia’s land combat forces on the border of a sovereign nation – will get you the opposite effect,” Wallace said.

Russia denies it is plotting an invasion but says it must be allowed to protect it security interests. It wants the West to keep Ukraine and other former Soviet nations out of NATO, halt weapons deployments near Russian borders and roll back forces from Eastern Europe. The U.S. and its allies have roundly rejected those demands, but they offered to engage in talks with Russia on ways to bolster security in Europe.

Even as Russia seemed to try to lower the temperature this week, the Western allies maintained that the threat of an attack remained high.

Maxar Technologies, a commercial satellite imagery company that has been monitoring the Russian buildup, reported continued heightened military activity near Ukraine, including a new pontoon bridge and a new field hospital in Belarus. It also said that some forces had left an airfield in country, a Russian ally, but it was unclear where they went.

A senior U.S. administration official said some forces arrived only recently and that there had been a marked increase in false claims by Russians that the Kremlin might use as pretext for an invasion. The official said those claims included reports of unmarked graves of civilians allegedly killed by Ukrainian forces, assertions that the U.S. and Ukraine are developing biological or chemical weapons, and claims that the West is funneling in guerrillas to kill Ukrainians.

The official was not authorized to speak publicly about sensitive operations and spoke to The Associated Press on condition of anonymity. The official did not provide underlying evidence for the assertions.

How Russia uses sarcasm to deflect attention in Ukraine crisis

While Ukraine braces for a potential invasion, tensions soared in the conflict in the country’s east where Russian-backed separatists have been fighting Ukrainian troops since 2014.

On Thursday, separatist authorities in the Luhansk region reported an increase in Ukrainian shelling along the tense line of contact, describing it as a “large-scale provocation.” Separatist official Rodion Miroshnik said that rebel forces have returned the fire.

Ukraine disputed the claim, saying that separatists had shelled its forces, but they didn’t fire back. The Ukrainian military command charged that shells hit a kindergarten building in Stanytsia Luhanska, wounding two civilians, and cut power supply to half of the town.

An observer mission of the Organization for Security and Cooperation in Europe is yet to offer its assessment of the situation.

There are concerns that a flare-up in the east could be used by Russia as a pretext for rolling across the border — though there was no sign yet that the fighting was larger than what typically happens. Russia in turn, aired worries that hawkish forces in Ukraine encouraged by the West could launch an attack to reclaim control of the rebel areas — the plans Ukrainian authorities deny.

A 2015 deal brokered by France and Germany helped end the worst of the fighting in eastern Ukraine.

The U.N. Security Council is scheduled to hold its annual meeting on the agreement on Thursday. Russia, which holds the rotating council presidency this month, will chair the meeting. At last year’s council meeting, Russia clashed with the U.S. and its Western allies over the conflict in eastern Ukraine and a similar confrontation is expected this year.